World Record Crappie: 12 of the Biggest Slabs of All Time

How large do crappie grow? Pretty hefty, as shown by the photos of slabs caught by these lucky anglers over the years 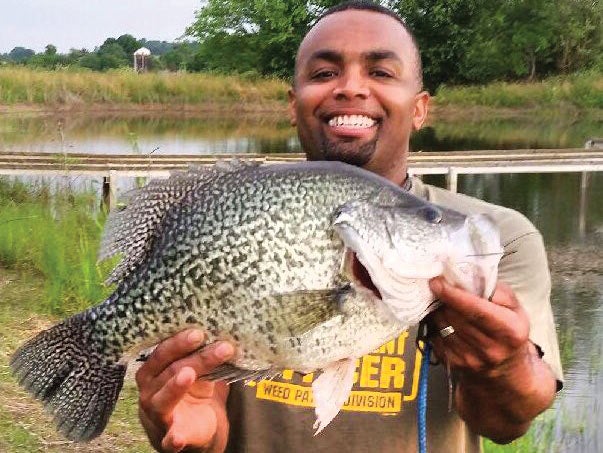 Catching the world record crappie, whether it’s white or black, is one of the most sought-after panfish prizes in North America. A 1-pound crappie is considered a nice catch. A 1 1/2-pounder is a really something. And anything over 2 pounds is one to brag about. Most states include crappies in their record-fish lists, but documenting the heftiest of the nation’s big crappies can be a daunting task.

Records on the state and even national level are not always rock-solid, especially older records. Certified weigh scales, verifiable witnesses to the catch, accurate measurements, and cameras were not as readily available as they are today. Considering that some of the biggest fish recorded were caught decades ago, many are not documented by photo, and some that may be listed as state records are a bit thin on verifiable catch documentation.

For example, the largest record black crappie touted by many sources is a 6-pounder taken in Louisiana in November 1969 by Lettie Robertson. At one time, the International Game Fish Association (IGFA) considered the catch a world record. But no photos of the fish are available, and other information about the catch is minimal. Though the IGFA has retired the fish from its record book, the National Freshwater Fishing Hall of Fame still lists this massive 6-pounder as the world-record.

For this review of the nation’s biggest crappie ever, photo documentation is required. So, here are the slabbiest the slabs—with photographic evidence (some admittedly of poor quality).

Ferguson fished a private small, deep, and weedy spring-fed pond in Loundon County near Knoxville when he hooked into this 5-Pound, 7-Ounce, 19.25-inch-long black crappie. It hit a Kalin’s 2-inch Triple Threat Grub on a 1/8-ounce jig head, and it took 5 minutes to land. The fish was weighed by a Tennessee wildlife officer on certified scales, and witnesses to the catch and the weighing were on hand. The fish also went through DNA testing by the state to make sure it was a black crappie, not a white crappie or hybrid. The fish is the current IGFA all-tackle record for black crappie, as well as the Tennessee state record.

Ferguson was sure to contact a Tennessee wildlife officer to weigh his catch because he’d caught a massive crappie (4-pounds, 4-ounces) previously from the same pond. Although that fish was photographed and weighed, Tennessee officials were not on hand to verify it.

This massive 21-inch long, 5-pound, 3-ounce white crappie has been the IGFA all-tackle world record for the species for over half a century. It was caught in the Yocona River below Enad Dam. Bright used an Action Rod and a Denison-Johnson reel. But there’s no information on the line, lure, or bait that he used. The fish was photographed and documented by witnesses for the catch and weight.

At one time, this huge 5-pound black crappie was the IGFA all-tackle record. It became a celebrity because after Hortsman caught it, he donated the fish to Bass Pro Shops in Columbia, Missouri, where it lived for years in their 11,000-gallon aquarium. The fish was affectionately named Pat and thrilled anglers of all ages who saw it. Hortsman caught the 19-inch-long fish from a private pond on a live minnow. He used an Eagle Claw rod and Zebco reel.

This 5-pound black crappie is the Arkansas state record and it was caught by Donivan Echols, who was 10 years old at the time. It shattered a 35-year state record. The fish was taken from 200-acre Lake Wilhelmina in Polk County. Young Echols used a rod, reel, and tackle he’d purchased the previous day with money he’d earned working for his grandparents. A live minnow duped the fish, and it took 5 hours for state officials to weigh it. The fish reportedly lost 1 ounce in weight before it was certified. It was 18-inches long with a 13-inch girth.

This Nebraska crappie is remarkable in several ways. First, it was caught through the ice by Moore on a 15-degree day two weeks before Christmas on an icy pond near Omaha. Moore and his brother Scott quickly measured the fish on video at 19 inches and considered taking it—alive—an hour drive away to have it certified by a state fishery official. Most remarkable is that the Moore brothers wanted to release the 5-pound fish, believing it was more valuable back in the pond as broodstock than in a skillet. They knew driving it an hour for a weigh-in and back to the pond would likely kill the crappie. So they released the potential record-breaker.

This California slab is the most recently caught record crappie on our list. Dave Burruss, the owner of Clear Lake Outdoors in Lakeport, California, was fishing on Feb. 17, 2021. Conditions were partly cloudy and 58 degrees. According to the Lake County Record-Bee, Burruss said, “It had been a slow day bass fishing, but I saw a few bigger fish on the Garmin Livescope that I thought were maybe bass. But these fish were suspended 6 to 10 feet deep in 25 feet of water. They ended up being huge crappies. There were two other crappies with this fish the same size that I couldn’t get to bite. I used a 4-inch Keitech Easy Shiner on a Cool Baits Down Underspin.”

This 4-pound, 9-ounce white crappie is barely the state record for Alabama, edging out second place by a single ounce. It’s also one of the heaviest angler-caught white crappies photographed. It was taken on the sprawling 39,000-acre Lake Martin—a deep, clear, heavily fished reservoir on the Tallapoosa River in central Alabama.

Read Next: Tactics for Catching Crappies in Hot Summer Weather

Southern Illinois’ Kinkaid Reservoir in Jackson County has a rich history of giving up stout crappies, and it yielded this 4-pound, 8.8-ounce state record hybrid (white/black) crappie for Povolish, besting the previous state record that held the top spot for 40 years. Povolish’s fish took a ½-ounce green swim jig he’d tied on for bass while working water near a grass bed.

This one-time IGFA world record black crappie is still the top fish in Nebraska. Paap caught it on a farm pond near Nebraska City in Otoe County. The fish struck a popular Road Runner jig that Paap cast using a Shimano rod and Zebco reel. It took five minutes to land the 4-pound, 8-ounce slab, which measured 18.5 inches in length.

This hefty white crappie was caught on Guntersville Reservoir, a big TVA impoundment in far northern Alabama near the Tennessee border. Guntersville is a popular fishing spot and is heavily fished. But Grant found a way to boat this impressive 4-pound, 8-ounce catch.

Read Next: How and Where to Catch a Limit of Crappies

Lionel “Jam” Ferguson (again) caught this 4-pound, 4-ounce giant black crappie two years prior to catching his 5-pound, 7-ounce world record in 2018. This fish wasn’t certified by state fisheries officials, so it was not accepted for record status. But Jam got a photo of the heavy slab. Then he took it home, cooked it, and ate it. But this photo of the fish tells the story best.