Scaredy Cats: How to Catch Giant Flathead Catfish in the Fall

When conditions are just right, the autumn action for big flatheads is so good, it's frightening 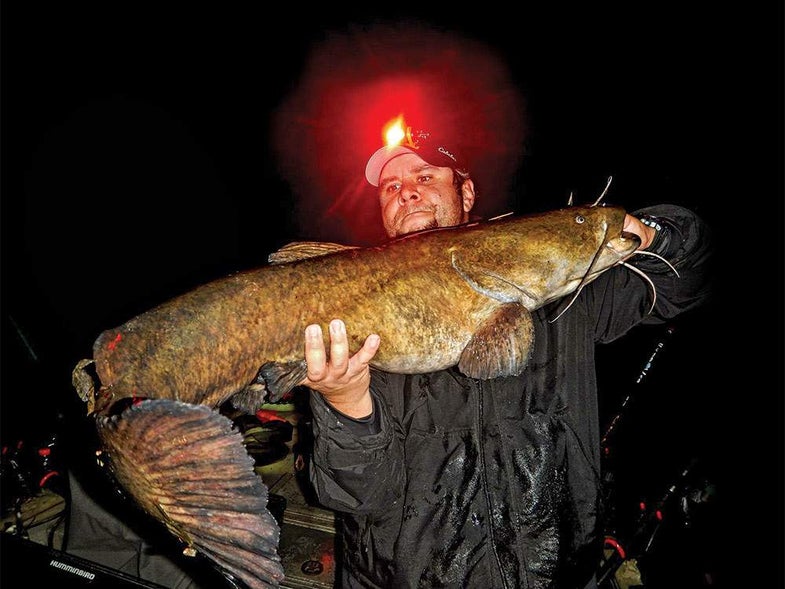 Twenty-four hours ago, I was swarmed. Waves of little Batmen, Optimus Primes, and Frozen princesses rushed my doorstep, all clawing at my plastic pumpkin filled with sweet Halloween staples. Instructing them to take one or two was futile, so I just let them have at it. The dust would settle eventually, and I’d be able to assess what was left of the candy stores. Now, on the night of November 1, I’m in a similar situation. At my feet, a 30-plus-pound flathead catfish is flopping around with a hook still in its mouth. The monster I’m fighting is pulling drag out into the darkness. Susquehanna River guide Joe Gunter is frantically trying to clear the other lines. In the front of the boat, another rod is bent to the grip and bucking violently in its holder. My friend Jim Fee is torn between grabbing it and staying on the video camera. At some point, I figured, the dust would settle, and we could get our heads around the fact that if you nail the conditions, this Gremlins-style panic is not uncommon in fall flatheading.

There is a widely accepted notion that all gamefish feed more heavily just before winter. While it’s not untrue, it’s also not a hard rule. Flatheads, however, put on that cliché feed bag like cliché clockwork. Throughout their range, which extends as far west as Texas and north into Canada, these fish are most active in rivers when the water temperature is 60 degrees or warmer. During these times, flatheads spread out, but as that temperature nears 50 degrees in fall, the cat congregation begins.

As we motored out that night last year on the Susquehanna near Harrisburg, Pennsylvania, I didn’t buy it when Gunter guaranteed we’d be covered in big fish. When the first rod arced before we even had three of six lines in, I started to believe. We were soaking live bluegills in a huge, deep back eddy with little flow—a classic wintering hole according to Gunter. Recent rains had also caused the river to rise and stained the water. Add in the 55-degree water temperature and, Gunter said, we had the perfect mix of conditions to get flatheads from miles away migrating to this spot. By 2 a.m. we’d lost count of fish in the 20- to 38-pound range.

Veteran Dallas-area catfish guide Chad Ferguson says it’s rare to need long sleeves before Halloween on his turf, but it’s around this time he can expect cold fronts to start breaking the heat. When they do, cooling water temperatures will move the flatheads in timber-rich Lake Ray Roberts from the 6- to 8-foot shallows to 12- to 16-foot holes. But unlike on steamy summer eves when Ferguson soaks all his perch and bluegills on the bottom, his approach changes on chilly fall nights.

“As the lake turns over, it scatters the baitfish, and that gets the flatheads feeding in different parts of the water column,” he says. “I’ll keep a few baits on the bottom, but I also let a few float around suspended under big slip bobbers. The fish are moving a lot this time of year, so the floats also let you cover more water.”

For Gunter in Pennsylvania, fall brings steady paychecks, with clients booking prime dates far in advance to get a piece of the All Hallows action. Ferguson, who runs hundreds of blue catfish trips a season, reserves the fierce fall flathead bite for his personal playtime, rarely taking clients out after dark. These guides fish thousands of miles apart, yet both live for the night Mother Nature flips the switch from pick to slaughter. She may delay the insanity by a week or three from year to year, but she always brings the chaos. I’ve experienced it only once, and that was enough to make me understand just how long summer can feel to an obsessed flatheader.

Gear Tip: Tin for the Win

No one will argue that tin shot is better for the environment, but they will argue that it just doesn’t perform like lead. Loon is changing that with its new line of Camo Drops (starting at $8.95; Loon Outdoors). These reusable tin weights feature a textured surface so they won’t slide on your line, and they come in matte colors so there’s none of that fish-spooking tin gleam. A wide variety of sizes allows for precise weight adjustment to suit any tactic.