Bunker Lunkers: How to Catch Big Striped Bass on Menhaden

When migrating stripers collide with schools of pogies, prepare for fall carnage 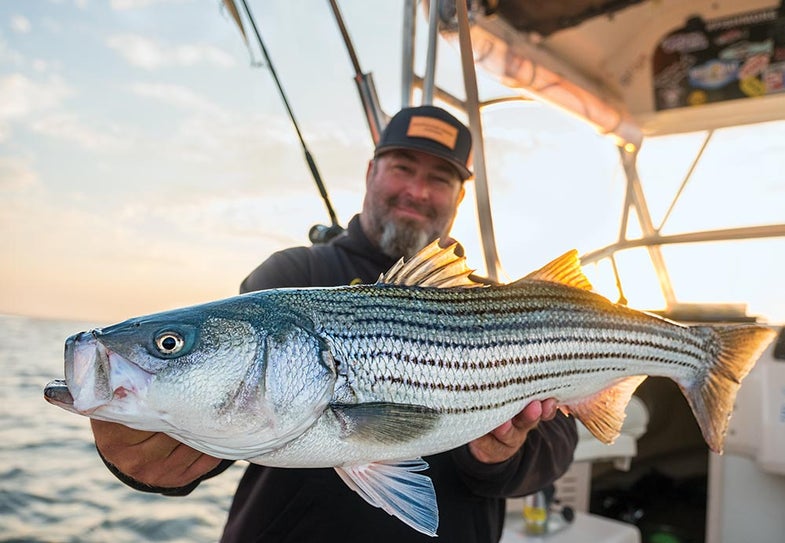 Send out a 12-inch live Atlantic menhaden with a 6-inch girth and it’s going to catch a big striped bass. That’s the first part of the magic. A little “rat” striper isn’t likely to take a swipe at a meal so massive. Even a 10-pound schoolie would be at risk of choking to death. When line starts peeling out after a pickup, you can usually bank on the diner weighing at least in the high teens. You could also be a five-count away from locking up on the next world record. The second part of the magic is the warning. The bait’s tail beat quickens. It moves in terrified bursts of speed. In a last-ditch effort to survive, it often comes to the surface. That’s when the striper makes its final approach, inhaling the bait in a thunderclap of whitewater that I’d use as a ringtone if only I could record it. It’s one of my favorite fall sounds, and without these oversize baitfish I might never get to hear it.

Atlantic menhaden—or bunker as they’re called where I fish in New Jersey—can grow up to 15 inches. They’re a staple food source for everything from Florida snook to giant bluefin tuna in Nova Scotia, and it’s their protein-packed, oil-rich flesh that helps gamefish reach heavyweight status. That oil has also made Atlantic menhaden big business for commercial fishing from the birth of the nation to the present day. Do you take an omega-3 pill in the morning? Congrats, you’re eating bunker. Fish oil is in such high demand that Atlantic menhaden were nearly wiped out, which directly affected the health of the east coast striper population. It was a cap placed on the commercial take in 2012 that would ultimately flip the switch for the bass and the fishermen that chase them.

“As far as I’m concerned, bunker are the most important fish in the entire ocean,” my good friend, New Jersey charter captain Eric Kerber, says. “If we didn’t have a strong bunker population, we wouldn’t have any big bass. They helped the striper fishery bounce back along a lot of the east coast.”

Anglers from Boston to Delaware get two chances to cash in; once in spring when the bass are pushing north, and again from early September through early December when the fish are heading south. During both runs, bunker provide the fuel the heaviest stripers need for the trek, and when the feed is on, it’s an incredible sight.

To find the bass, just read the bunker pods. The more densely they’re packed and the more tightly they swim in a circle, the more nervous they are. When stripers go on the offensive, striking from below, an entire school of bunker—sometimes thousands of fish—will leap out of the water in a line like a wave in the stands of a football stadium. Many anglers approach a hot pod with the snag-and-drop method, firing a weighted treble hook into the fray, snagging a bunker, and letting it fall below the school. I prefer to send a livie out unweighted with a single hook through its back just forward of the dorsal fin. Stripers eat menhaden headfirst, so I want to be sure the hook is in the best position. Likewise, removing a single hook that ends up deep in the throat is much easier than yanking out a big treble. When the bait is thick, getting a striper to lock in on an artificial can be a challenge, but according to Kerber, one lure outshines the rest.

“If I’ve got guys that want to cast lures, I’m tying on pencil poppers,” he says. “No lure does a better job of imitating a bunker flipping on the surface. The trick is working the edges of a school, not casting to the center. You want to mimic that one bunker that got separated and is now an easy target.”

Regardless of whether you’re waiting for a live bunker to get hammered or hoping to see a pencil popper get obliterated, it’s not knowing how big the bass that takes the shot is going to be that keeps the pulse boosted. It is the salty angler’s equiva­lent of knowing that any buck that steps into range will be a shooter. Every single striper I’ve caught that weighed 40 pounds or better fell to a live menhaden, and every time we leave the dock in October and November, I know that adding another check to that list of 40s is an extremely real possibility.

Sure, you can buy a pair of rubber deck boots for 20 bucks, but if you spend a lot of time on the water, your feet won’t thank you. The new Simms Challenger Pull-On Boots ($140; simmsfishing.com) have a thin fleece lining to keep your toes warm in chilly fall weather. Simms’ Right Angle Footbed stops your dogs from howling, and given the tough construction, you can consider these boots an investment that will last for many cold seasons to come.