This wild pizza is crispy, cheesy, and ready in minutes. And perhaps best of all—no tipping required 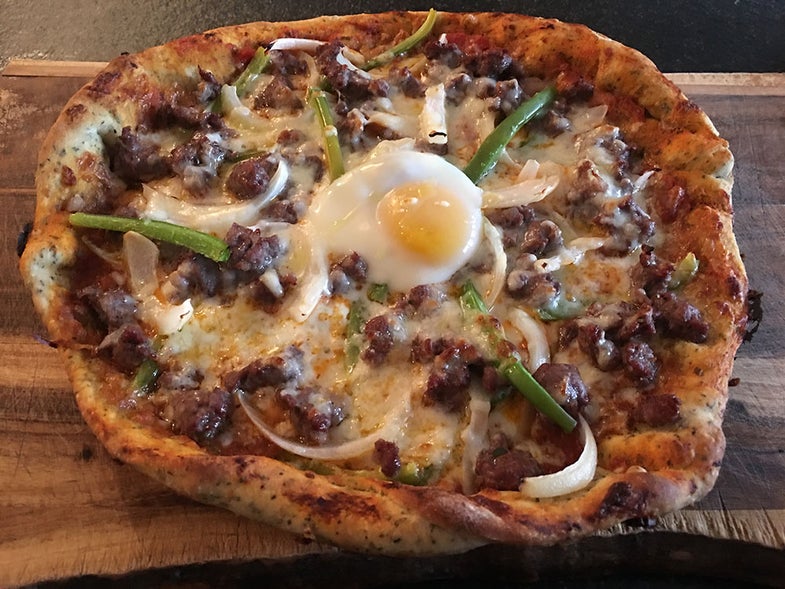 I could make three of these wild-game pizzas in the time it takes Domino’s to deliver one pie to my door—and, no offense to Domino’s (which I do love), mine’ll taste better, too. Seriously, this is one of the easiest, quickest, and most delicious wild-game recipes you will ever make. I’ve fixed it a few times: The first was topped with mottled duck breast and caramelized onions (great). The next was classic margarita (good, but seriously lacking in wildness). And the most recent pie (the one photographed here) featured the holy trinity of pizza toppings: venison sausage, onion, and green pepper (perfection).

Of course, what’s also great about this recipe is that you can top it however you like.

Except for pineapple. Pineapple is not allowed on this pizza.

Step one: Decide what you want on your pizza. Sausage, onions, and green peppers is my favorite combo, so that’s what I went with here. The venison sausage I used is from a recent batch I made at home—a bay-and-garlic sausage, courtesy of Hank Shaw. For the record, I only used about half of the sausage shown here; the rest I cooked for breakfast. The pizza dough came from the grocery store, and the cheese is shredded mozzarella. I’m not gonna bore you with measurements here, because making pizza should be fun. Go with your eye (and gut).

Lightly flour a flat surface and roll out the dough. This isn’t geometry class, so don’t worry about getting a perfect circle. Just concentrate on rolling it out to an even thickness and something that’s slightly bigger than your cast-iron skillet.

Before you (gently) transfer the rolled-out dough to the skillet, sprinkle the skillet with flour and cornmeal. This’ll help keep the dough from sticking to the pan. It will also give you a crunchier bottom crust.

Transfer the dough to the skillet and drizzle some olive oil over the top. (In case you’re curious, the dough I was using had herbs folded into it. The flavor was good, but if I could do it over again, I’d go with plain dough.)

Nothing fancy here—just store-bought, jarred marinara sauce. Drop several tablespoons onto the dough, then spread the sauce out with a spoon.

Warm up the skillet over high heat on the stove. When the tomato sauce starts to bubble slightly, it’s time to pour on the fixings.

I like to layer my toppings: First some cheese, then peppers, onion, and sausage, then another layer of cheese, and so on. At the last minute with this pizza, I decided to drop an egg in the center of the pizza. Why, you might ask?

Why not? Besides, it’s my pizza. No more questions. Remember, we’re in a race against Domino’s!

Stick the pizza in the 500-degree oven for about 6-10 minutes. When the cheese has melted and the crust is golden-brown, it’s ready. Well, almost.

Out of respect to the roof of my mouth, which I’ve burned too many times by chomping down onto too-hot pizza, I let the pie rest for a couple minutes. Tom Petty was right, man.

There you go—homemade wild-game pizza. I’ll leave you to your own devices, but I happen to think a cold IPA pairs pretty damn well with pizza. Enjoy.

But, wait, you might ask, how was the egg on top?

Okay, fine. It was awesome.