How to Decoy Bucks for the Hottest Action of the Rut

The chasing phase is about explode across whitetail range. But the short window before it does—as in, right now—is a killer time to fool a buck with a decoy 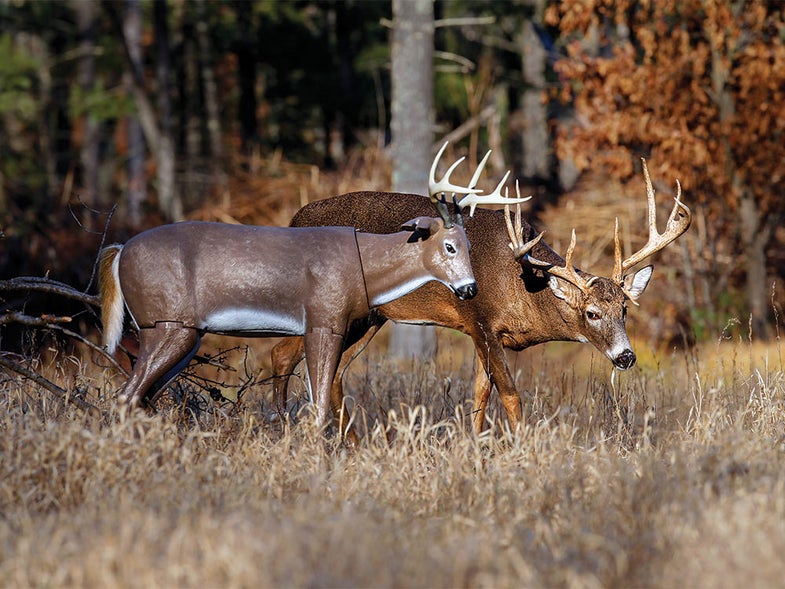 There was a hollow, clattering explosion. Then plastic parts went flying through the air—an ear, a leg, a head. It was too much. I was already rattled, shaking like crazy at what would be my first bow buck. But when he lowered his head and freight-trained my decoy, smashing it to pieces, everything stopped for a second. I stood there, frozen, holding the bow at my side like an idiot, thinking, What just happened?

The buck seemed to be in a similar state. He’d spotted the fake almost immediately, closed fast, and circled downwind. Then he’d pinned his ears, tipped his white 8-point rack at the decoy’s flank, and barreled right through the thing. Now, he appeared to be as dumbfounded as me—standing there, also frozen, staring at the pieces of his “rival” strewn over the winter wheat.

I snapped out of it before he did. I honestly don’t recall aiming, or even taking the shot—though I did both. I just remember watching the buck sprint away, back across the wheatfield, and then disappear into the woods’ edge.

I was hunting southeastern Minnesota with F&S whitetails editor Scott Bes­tul, who’d finally convinced me to come to his place and hunt deer with a bow. I’d chased whitetails for years, but only with a gun. “Bowhunting is even more exciting,” he promised. “Come in late October or early November—that’s magic time.” That was almost 20 years ago, and I’ve gone back every few years since, usually during that same time frame.

For gun hunters, the action of the upcoming chasing phase of the rut is hard to beat. But with a bow, it’s almost too crazy. Bucks hurtle by out of range, never to be seen again. Or worse, they bomb past right under your stand, ignoring your attempts to stop them.

But the week or two before the chase goes into full swing is just about perfect. Bucks are moving well and still somewhat predictably within within their home ranges. They’re seeking does and have maybe started a few half-hearted chases, but they aren’t so glued to their would-be mates that they can’t be lured in. Rattling works. Grunt and bleat calls work. And there’s no better time to stake out a subdominant buck decoy.

Exactly how to stake it out is as much art as science. In the years that I’ve been trying to re-create my first decoy hunt, I’ve seen bucks react to different setups in a bunch of ways. I’ve seen smaller bucks charge straight in for a fight, and big ones slink away, tails tucked. In the end, though, there are some useful rules of thumb for the best results.

First, no surprises. Put your fake where bucks can see it from a distance; they don’t like being caught off guard by the sudden appearance of a rival, especially a weirdly stiff-looking one. For placement, 15 yards upwind of your stand is about right. Bucks will usually circle tightly downwind for a good sniff, giving you a chip shot. The wariest bucks may circle a little wider, which is why if I’m on pressured ground or dealing with an older buck, I may push the deke out 5 yards or so more to avoid too steep a shot angle.

Generally, you want to have the decoy quartering to you, because most bucks (though not all) will eventually challenge your fake head-on, giving you a perfect quartering-away shot. If you’re dialed in on a buck’s approach, though, facing the deke toward his anticipated direction is more likely to be read as a challenge and met with a response—which is exactly how Bestul had set me up on that first hunt. After dousing the deke with scent-​­eliminating spray, he’d pointed its rotomolded nose at the corner of the wheatfield where he’d guessed that the white-racked 8-pointer would enter from along a bedding ridge.

After the shot, almost as soon as the buck vanished back into the woods, I heard a crash and a thud. Then silence. I looked at my hands, which were still shaking like crazy, and a strange feeling welled up—a sort of hyperawareness of being alone, in a tree, in the woods, and the only person anywhere to have seen what I just saw. Just then I started breathing so hard that I had to sit down. With my head between my knees, I thought, So this is bowhunting.

We would recover the buck quickly, right at the edge of the woods, but not before Bestul met me at the stand and saw his decoy lying in pieces. “What the heck happened here?” he said. What happened is that I became a bowhunter who loves to hunt over a buck decoy.

Bonus Tip: Switch to a Doe Decoy as the Rut Progresses

A buck decoy works best prior to the chasing phase, but as the rut progresses and bucks become increasingly focused on the females, it’s smart to add a doe decoy to your setup. A ­subdominant-​buck-and-​­bedded-doe combo is a good bet, and Rinehart’s Doloma Series Bedded Doe adds a little lifelike allure. The head of this realistic foam silhouette turns in a breeze—enough, maybe, to bring your next bow buck in for a look.

A lone doe decoy is a good bet during the chasing phase and beyond, too. If you call to a buck during the heat of the rut, there’s a good chance it has places to be and will ignore you if he can’t see the “deer” that made that bleat call or that rivals bucks seem to be fighting over. Adding the visual cue of good doe decoy can make all the difference.