How to Hunt Ducks on Public Land 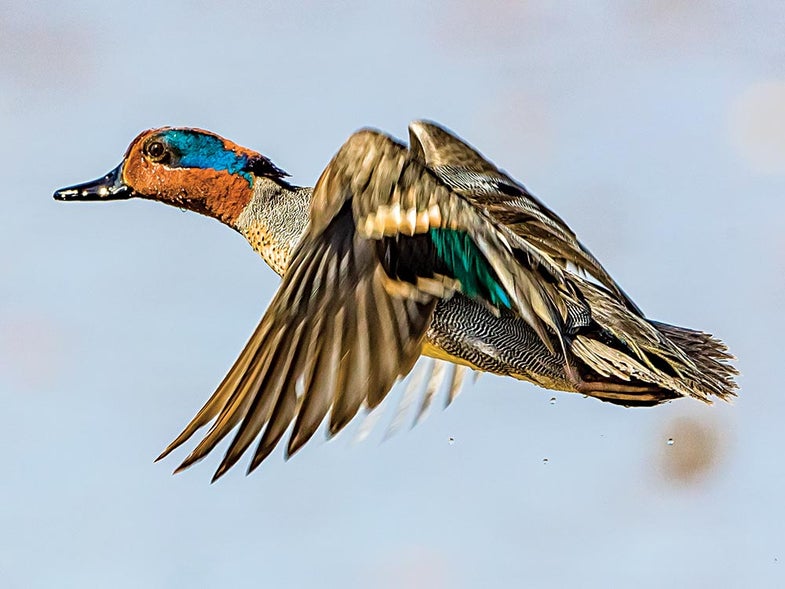 Green Bullet: A drake greenwing teal speeds over the tops of the reeds of a Louisiana marsh, making for a tough target.. Rick Adair
SHARE

Doesn’t that look like crap?” I asked my brother, Matt, as we stopped to stare at a makeshift blind in the beams of our headlamps. Six steel T-posts had been driven into the mudflat, wrapped maybe chest-high with faded burlap, and hung with a few oak limbs and small cedars. Anything flying overhead, like a mallard, would have a full view of the occupants inside. It was 3 a.m., and we’d already hauled three dozen decoys, two layout blinds, a blind bag stuffed with shotgun shells and coffee, a spinner, and two shotguns across a half-mile of sodden mudflat.

“It does look like crap,” Matt said. “Think they’ll shoot anything out of that?”

We kept walking, icy mud gurgling around our ankles with each step. I’d bundled our coats and sweaters into the decoy bag on my back. It was 22 degrees, and I was sweating through my base layers. But the teal ditch was just ahead.

I’d hunted the flat before. It’s underwater much of the year, but when the river falls, it becomes a patchwork of ducky puddles, brimming with vegetation and invertebrates. I’m not the only duck hunter who knows about it, of course; the spot’s one fault is that it’s easy to scout from the road.

Forty-eight hours ahead of the opener, I must have glassed a thousand ducks spread out over the flat. It wouldn’t last. With temperatures dipping into the 20s, the puddles were beginning to freeze at night. The morning before the opener, the largest of the puddles, where I wanted to be waiting the next day in my layout blind, was solid ice. I figured the ducks were gone, but a closer look revealed a writhing, brown mass 200 yards down the flat. All 1,000 or so ducks seemed to be clustered into a hole that, for some reason, wasn’t frozen, and was small enough to shoot across with a load of No. 2 steel.

I drove back after lunch to glass again. By then the puddles were thawed, and the ducks were scattered throughout. There stood the T-post blind too, at the edge of the largest puddle. It could’ve easily been built in the five minutes ahead of shooting light the next morning, but that wasn’t the point of the blind. It was there as a signal to other hunters: This puddle is taken.

Matt was driving five hours to hunt opening morning with me, and I knew that trouble could be brewing. Put duck hunters together in an off-season banquet hall, and we’ll buy one another beers, bid on pintail paintings, and toast the mythic Grand Passage. Put the same crowd together on a public duck hole just before shooting light on opening morning, and we’ll lose our damned minds. Good, God-fearing folks will engage in stump-jumping johnboat races, howl cussword soliloquies at sky-busters, and reminisce about the time Frank found a competitor’s blind in his favorite spot and set it on fire.

I almost aborted the plan, looking at the T-post blind, but I hadn’t found another place within 40 miles with a fraction of the birds. I decided to investigate the hole where I’d seen the ducks early that morning. I slipped through the woods to avoid flushing any birds, and as I picked my way to the edge of the flat, I found a feeder ditch with a little current spilling out into a decent-size puddle—and I smiled. It was plenty far enough from the T-post blind for a safe hunt, and even better, it was likely to be the only unfrozen puddle at shooting light the next morning. We just had to get there before anyone else.

Matt and I woke at 2 a.m. On our walk in, we paused for a second to express our mutual disdain for the T-post blind, then continued to the ditch and began setting decoys. We placed a few in the ditch itself and scattered the rest in the puddle ahead of us, which had skim ice around the edges but was otherwise open. The ducks, I assumed, were roosted on the river.

We were placing the final decoys when headlamps began appearing on the flat. Some hunters were walking in from the levee, as we had, others were boating in from the river. I heard the rumble of an ATV, and then the rattle of decoys in the woods behind us as two more guys walked in from a private access. I turned on my light when they were 30 yards away. “We’re already set up here, guys,” I said, trying to sound tough.

“We’re headed to the big puddle down there, where them ducks have been,” one of them replied.

“There’s a blind and four hunters already there,” I said. “Might as well save yourself the walk.”

“Blind? When the hell did that get there?”

They stood there a minute or two, cussing and discussing their alternatives. Finally, one of them said, “Y’all don’t shoot ’em all.” The decoys rattled out of hearing range, and the ATV started up again.

All the headlamps winked off just before shooting light. Best we could tell, we were one of six hunting parties scattered across the mudflat. It was clear and calm. There were wings whistling in every direction and teal already swimming in the decoys at our feet as I pulled my phone tight to my chest to peek at the time. “Two minutes,” I whispered.

Seconds passed. Somewhere toward the river, a shotgun popped, followed by a rumble of follow-ups—the first shots of a new duck season. It was time. We rose from our blinds, and a hundred ducks roared from our spread. For the next 30 minutes, it was bedlam as we retrieved downed birds and shoved shells into our guns. Matt and I killed our six ducks each—​all teal—in the first hour.

The boys in the T-post blind called too much and shot from too far, we assessed. And yet we watched them slog through the ice and mud over and again to pick up birds. They whooped and hollered and laughed, proud owners of that puddle, if only for a while. Our plan had worked—but so, it seemed, had theirs.

“Damned if I don’t like this duck opener a little better because those stupid sons of bitches are out here too,” Matt said. We cased our shotguns and finished our Thermos of coffee. It would make for a slightly lighter walk back—and we weren’t in any hurry to leave the teal ditch anyhow.

Browning’s BXD Extra Distance waterfowl loads are some of the best standard steel duck shells I’ve tried in recent years. The 3-inch loads have 11⁄4 ounces of shot at 1,450 fps, which in my opinion is the sweet spot for an all-around duck shell. The BXD loads I tested last fall proved reliable and knocked the heck out of everything from decoying teal to passing goldeneyes. And at about $20 per box, they are economical enough to shoot by the case.