How to Hunt the Greenwing Teal Migration

It has all the fun of bluewing hunting, minus the September heat 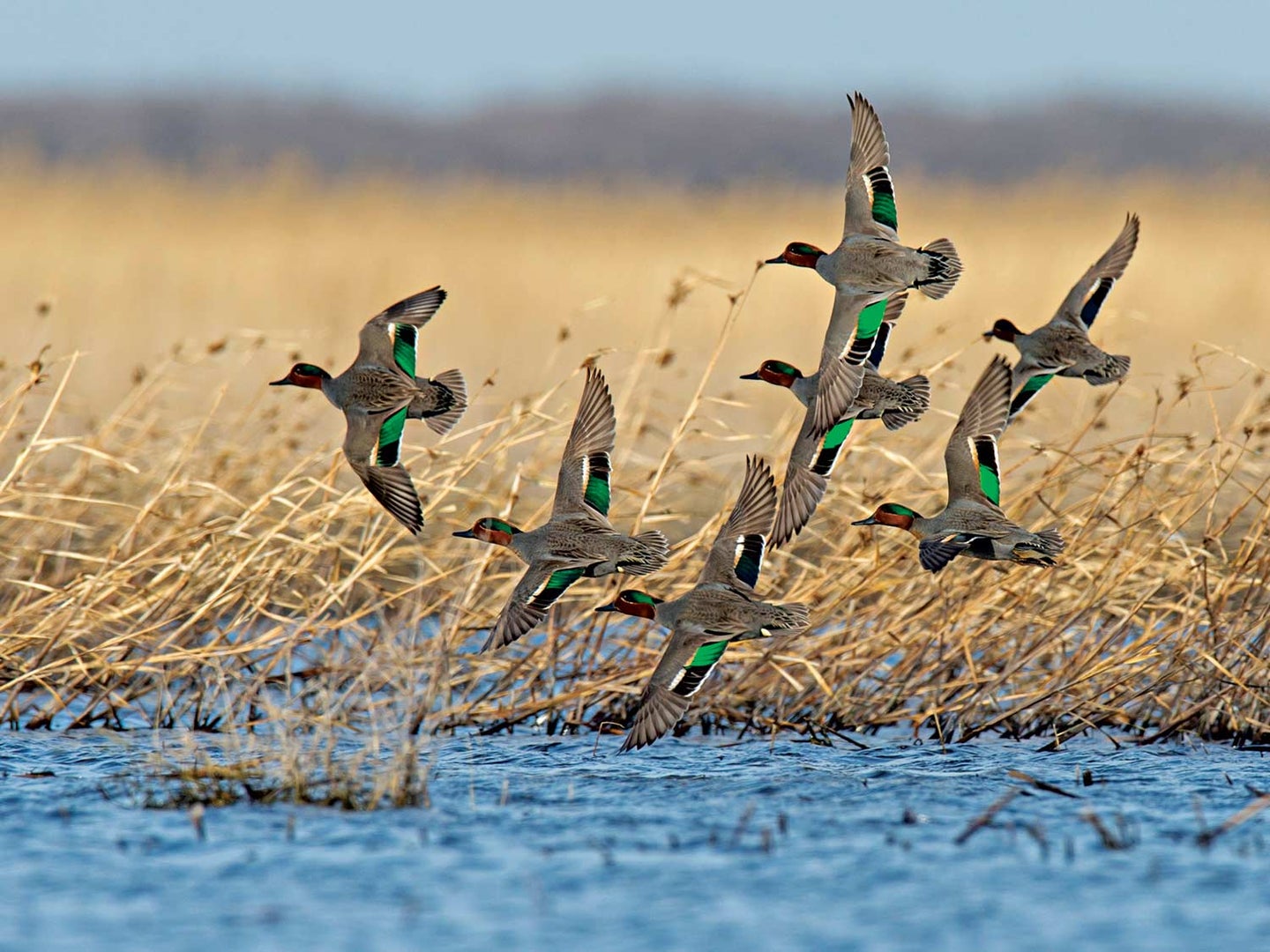 Unlike most great duck hunts, my best teal shoot began when I picked my mother-in-law up at the airport the day before Thanksgiving. Passing the reservoir on the way home, I glanced into a bay and saw it covered with little ducks. I floored it for the house, threw my MIL’s bags into the guest room, and was back in an hour, running hundreds of teal out of the shallows. I set decoys, tucked into the grass, and shot a fast limit as birds came back.

The greenwing migration is the “other” teal season. Small and surprisingly hardy, greenwings migrate late. Where I live, in the upper Midwest, the three weeks before Thanksgiving are usually the time. Catch the greenwing flight, and it’s every bit as exciting as a September bluewing hunt, but without the mosquitoes.

Like bluewings, greenwings are shallow-water feeders. They prefer to skim or walk to their food, which is primarily seeds and invertebrates. I’ve shot them mostly in flooded vegetation, but also on mudflats, in wet cornfields, in ponds, and even over holes in the ice.

Because they like shallows and flats, greenwings are often easy to spot with binoculars, and their low, wingtip-to-wingtip flight pattern makes them easy to identify in flight. Greenwings will fly all morning, and I’ve had some good afternoon hunts. Running teal out of a spot they like and then waiting for them to come back is my favorite tactic, and it works at any time of day.

Teal hunting doesn’t take much gear. Eighteen decoys make a fine spread. Use greenwing decoys if you want, but mallards are easier to see, and teal aren’t the pickiest of ducks. Greenwings like a spinner on a sunny day, and a few peeps on a teal whistle will turn them toward the spread. Since the ducks fly low and drop in without circling, overhead cover isn’t absolutely critical for a greenwing blind. Often you can get by with willows clipped and stuck in the mud, although I’ve shot most of my greenwings while hunting from a sneak boat or a layout blind.

What’s hard about teal hunting? The shooting. They are here and gone without warning, and they’re the smallest of the puddle ducks. When a greenwing looks like it’s in range, it’s probably only 20 yards away, so shoot right at it.

Flock shooting either doesn’t work or it works too well. Pick one bird on the edge of the bunch when you can. If you know you’ll only shoot teal, load with No. 4 or 5 steel and use an Improved Cylinder. But one of the bonuses of the “other” teal season is that big ducks are legal too, so I hedge my bets with 2s or 3s in case a flock of mallards crashes my hunt.

Sometimes the biggest challenge in teal hunting is getting your gear out to where the teal are and hiding there. The best solution I’ve found is a sneak boat. I rarely paddle mine. It draws very little water, and I’ll tow it as a decoy sled, then lay out in it and drape some netting over it. The AquaPod Sport ($799; aquapodboats.com), a stable 10-foot roto-molded polyethylene boat, is a great, affordable rig.