Stand and Deliver: How to Hunt Waterfowl from a Stand-up Blind

Because portabale stand-up blinds are fast, deadly, and way more comfortable than layouts 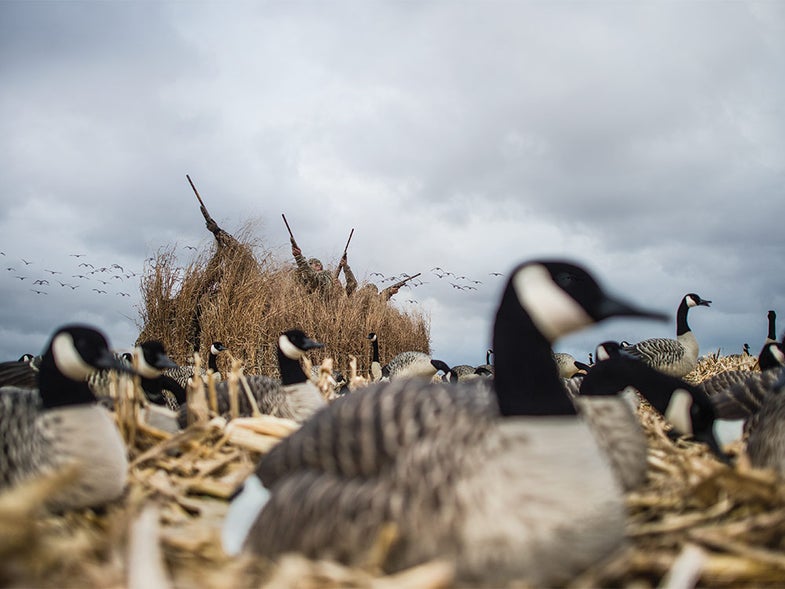 Layout blinds are as much a part of the modern goose hunter‘s arsenal as short reeds and steel BBs. Fred Zink, founder of Zink Calls and Avian-X decoys, helped design and popularize the first layout blinds back in the ’90s. So, on a recent hunt in Saskatchewan, I was surprised when Zink set pieces of aluminum framing and camo denier fabric on the ground in front of us. Within 10 minutes, we were adding the ­final layers of brush to the outsides of two stand-up blinds and arranging chairs and bags inside.

On the Canadian prairie, you expect lessers to be accommodating in early ­October, particularly with a guy like Zink doing the calling. But we were hiding a large crowd, including a couple of other writers, marketing staff from Browning, and our local guides. We were there testing out new A5 Wicked Wings shotguns, which meant that in addition to the usual goose-blind fidgets, there were cameras snapping. But if we flared any birds, I don’t remember that. We shot limits of toenails-down geese every morning and heavy straps of greenheads in the evenings for good measure.

Zink told me he rarely uses layout blinds anymore, in favor of his A-Frame blinds. “They’re more comfortable, easier to shoot out of,” he says. “And I think they hide you just as well—if not better—than a layout blind does.”

Stand-up blinds are nothing new, but traditionally they’ve been permanent structures built to hunt good areas for the long haul. The idea of a portable stand-up blind to use for field ducks and geese—and along river sandbars and shorelines for that matter—has been a little slower to take hold for a couple of reasons. Quality blinds that are truly fast and easy to set up haven’t always been available. They’re also expensive. The Avian-X A-Frame costs $499, while the Banded Axe Blind (a boat-shore combo blind) costs $350 to $400, depending on the size, and the Redneck Waterfowl Blind is $300. Still, if the goal is to move with the birds and hide three to four hunters, the blinds are less expensive than an arsenal of high-end layout blinds—and they take up less space in the boat or trailer.

Even more so than layout blinds, stand-ups should be thought of as a shell for heavy brush, which will provide the true concealment. All of the portable stand-up blinds that I know of have stubble straps, and every one of them ought to be filled with something before you sit down to hunt. Zink kept a supply of switchgrass and oak brush to weave into the straps of his blinds as we were setting up each morning, and we touched the hides up by cutting extra limbs when they were available nearby. Once brushed in, the blinds provide cover on all fronts—including from overhead.

Stand-ups are best when they’re set against a treeline, fenceline, or ditch, but they’ll work when the X is in the middle of a pea­field too—again, so long as they’re heavily brushed in. In an open field, you might have to adjust the setup on a sunny day to avoid casting unnatural shadows in an otherwise bright field. One midmorning in Saskatchewan, when we were halfway to our limits, we noticed working geese drifting away instead of finishing. Zink took a step out of the blind, looked at the sun, and declared we had a shadow problem. We simply repositioned to the other side of the spread. Our shots became crossers, rather than incoming birds—but with the shadows dissipated, they were close enough that it wasn’t much trouble.