Rock of Ages: How an Expert Flint-Knapper Makes Stone Arrowheads 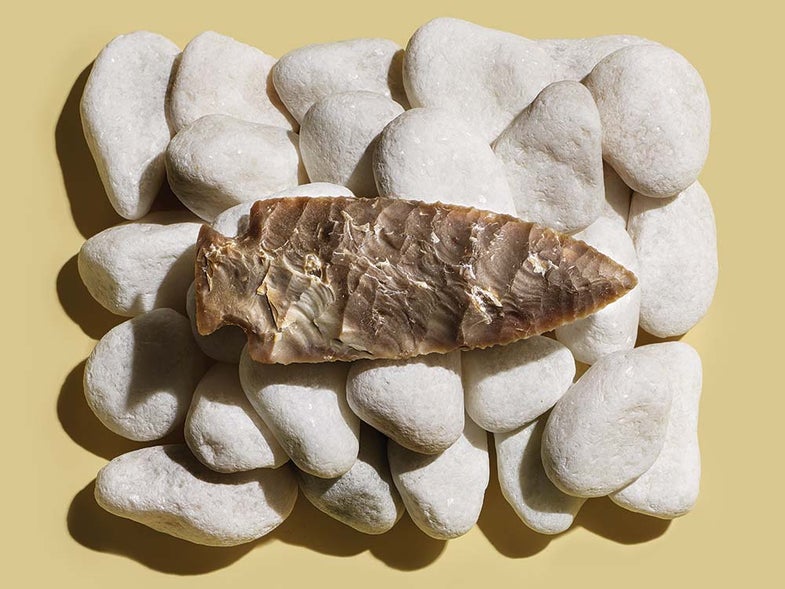 Back when you were little,” James Parker asks me, “did you ever shoot a plate-glass window with a BB gun? I know I did, because I remember the whupping I got from my daddy.”

The question catches me off guard. I’m sitting in Parker’s deep-woods workshop, high in the Appalachian Mountains of North Carolina, with a rock in each hand, wondering how to use one to turn the other into ­something sharp and pointy. “Sure,” I reply. “What kid didn’t?”

“Good,” Parker says. “Then you already know what a Hertzian cone is. It’s that little round divot of glass you get when you shoot a window with a BB.” What happens, Parker explains, is the BB’s energy travels through the glass and feathers out the other side in a cone shape. “And that’s what you’re fixing to do,” he continues. “Knock a couple hundred little Hertzian cones off the back side of that rock.”

So that’s the trick, I think. Hertzian cones. Conchoidal fractures. The lithic reduction continuum. My bad. I thought I had come to these mountains to learn how to chip out an arrowhead .

Parker, 54, is a flint-knapper, traditional bowyer, and primitive-skills instructor. When museums need a historically accurate stone adze or an authentic bark-sided wickiup, he gets the call. He’s been knapping for 40 years. As a teenager, he got 30 bucks for an arrowhead. Three times now, he has replicated every man-made item found on Ötzi, the famed Ice Man of the Italian Alps—stone tools, copper ax, bow, leather cape, clothing, even the arrowhead found in the 5,300-year-old mummy’s back. Collectors have paid as much as $15,000 for the sets.

But today’s might be his toughest assignment. Parker typically plans two days for a course in basic flint-­knapping. I have a few hours. He started off by knapping a 4-inch-long spear point of Keokuk chert. It took him maybe 20 minutes. Watching, I realized I’d bitten off more than I had time to chew.

Stone tools were the teeth and claws of aboriginal man. We tend to think of the sexy stuff—flint knives, ax heads, lanceolate spear points—but rock was the raw material for nearly every item in the primordial tool chest. Parker ­rifles through the pile of flakes, chips, and fine grit between his feet, what knappers call debitage. There is nothing in the pile, he says, that couldn’t be used. The smallest flakes were turned into specialized needle-making tools. He wets a piece of brain-tanned buckskin, smears it into the rock dust, and turns it over to show the glistening grit. “Wet sand­paper,” he says. “They had everything and they wasted nothing. When we break a knife, we say, ‘Dang, I gotta go back to Wally World.’ But aboriginal man would say, ‘Heck, yeah, I’ve got two more tools!'”

At the moment, I’m just hoping to get a single something out of my rock. The convex arch on each side of an arrowhead or spear point is called the lenticular lens. It looks like a football split lengthwise, and fashioning that dome requires a knapper to think three or four stages down the road. Before you can fashion an edge, you have to build a bevel, which means you have to rough out a grind on the blade and bring the two facets of edge into alignment. Parker uses a Sharpie to draw out oblong shapes on one side of the stone and places a dot on the opposite side. A precise hit on the dot, with the exact angle, sends enough energy through the rock to blast out a Hertzian cone on the far side.

Such higher thinking may have resulted in more than a sharp edge. Some scientists have proposed that tool-making co-evolved with human language. Using MRIs and Doppler ultrasonography on expert knappers, they found that patterns of blood flow in the cerebral cortex were strikingly similar when subjects were beating on rocks and when the subjects sat quietly and thought about specific words.

I’m no experimental psychologist, but I definitely thought of specific words as I bashed my fingers, missed the rock entirely and whacked my thigh, and broke off ragged chunks of rock that quickly turned my ­mastodon-​worthy spear point into something more aptly sized for a Paleo­lithic chipmunk. Parker can tell I’m getting ­frustrated. My finger bones ache. My palms are bleeding from tiny bits of Keokuk shrapnel. He knows it’s time to lighten the load. “What’s the oldest profession in the world?” he asks. I cut him a look. We all know the answer to that old trope. He grins. “Well, you didn’t get the hooker,” he says, holding up his spear point, “until you had something to trade.” I laugh. That’s a good one. “Don’t be so hard on yourself,” Parker says. “I once kept up with how much rock I beat: 50 tons in a single year. But that’s nothing compared to some 10-year-old Cherokee kid who already had a million years of heritage and experience behind him the first time he picked up a rock.”

I feel a little better. And the lenticular lens is taking shape. The edges are converging. There’s a definite biface to the stone, so it’s obvious the rock has been worked. Somewhere inside it lies a spear point. I can almost see it. Each time I pound a flake off, there’s a sharp, clean bite to the air, and it seems like I can smell the Pleistocene.

I chip away. I imagine wolves howling outside the firelight, or the last few steps of a feeding deer. Or a giant ground sloth. Another Hertzian cone drops to the floor. I’m two hours in. Only a few hundred thousand years to go.

Salmon chowder makes for a filling meal in the backcountry. Heather’s Choice

Heather’s Choice Smoked Sockeye Salmon Chowder ($15) is made to fuel serious off-trail pursuits. Founder Heather Kelly is an Alaska-born evolutionary nutritionist, former NCAA rowing champion, and backcountry advocate. She sources wild-caught Alaskan sockeye, adds carrots, celery, and potatoes, and finishes the soup off with a coconut milk powder for a super-size taste and calorie punch. If salmon chowder’s not your thing, Heather’s Choice also offers a dark-chocolate chili made with grass-fed bison.