Paddle Your Own Canoe

Tips on moving through the water from a self-proclaimed expert 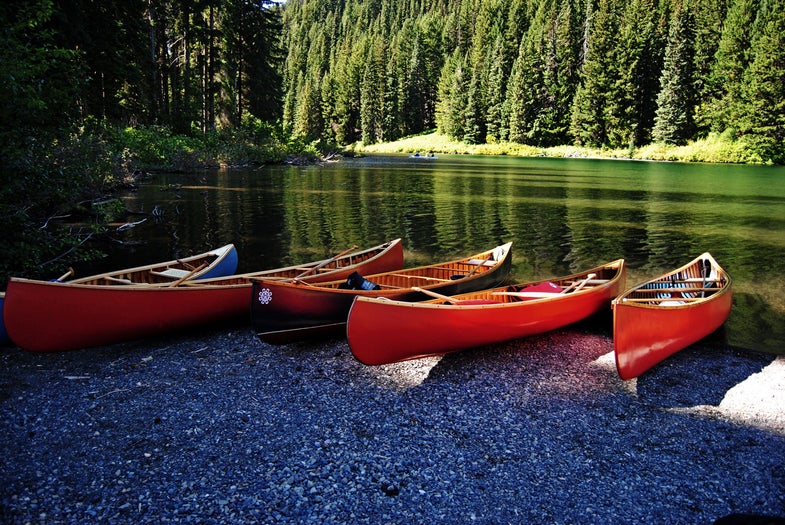 I was once in a canoe with Samuel Thayer, a wild-food expert who lives in northern Wisconsin and makes a good part of his living “knocking” (harvesting), processing, and selling wild rice. As we paddled out to the rice beds, he remarked, “You’re one of the few people I’ve been out with who actually knows how to paddle a canoe.”

Nearly everyone believes that they know how to paddle a canoe, even if it’s their first time. A canoe is, after all, the simplest boat ever invented. But its simplicity is the result of centuries of subtle refinement. So it is with paddling. Easy to do, an art to do well. I’m no expert but that doesn’t stop me from pretending to be.

• An efficient stroke starts when you start thinking of water as wet cement and your paddle is the lever by which you pull the boat up to to it. Most people waste most of each stroke. By the time the blade is even with your hips, you’re done, you’re just lifting water.

• Power comes from your legs, hips, torso, and shoulders. These have bigger, more powerful, and more elastic muscles than your arms, which are almost just along for the ride. Your torso and shoulders will turn the better part of a 90-degree angle on a proper stroke, your hips and legs somewhat less. Experts liken the twisting and untwisting of these large muscles to a rubber band. Another good image to keep in mind.

• The shaft of the paddle remains perpendicular to the water for most of the stroke. If you’re paddling on your left side, your right hand is atop the grip. With your arms nearly straight, twist so that your left shoulder moves forward as far as comfortably possible, grip hand even with the left side of the boat, nearly over the water, shaft vertical. Lean forward from the hips.

• The “catch” is everything. Keep your grip hand elbow near shoulder height. I have found it helpful to pause for a split-second before inserting the blade—it should be vertical and, at the instant of insertion, not moving forward nor backward. Inserted correctly, the paddle makes no splash at all. I’ve never been able to achieve this, but I try. “Catch” is exactly what it should feel like the wet cement is doing to your paddle. This where you get leverage.

• Untwist your body, unleashing the energy you’ve stored in those coiled joints and limbs. The top arm’s function is more to push the blade all the way into the water than to pull. To the extent that you do pull, it’s with the bottom arm.

• Take the paddle out before you think you should. It will probably already be past your hips.

Voyageurs, the French-Canadians engaged in the transport of fur as early as the 17th century, were probably the best paddlers ever and famously hardy little dudes. Anyone over about five-foot-four was too big, an inefficient weight-to-power ratio. These men portaged two 90-pound packs at a time, usually at a trot. They’d paddle 14 hours a day, singing and moving at between 4 and 6 mph. They reportedly paddled at a rate of 50 strokes per minute. That’s what they found most efficient.

For the less-practiced modern-day paddler, Davey Hearn, who competed in two Olympics and won seven medals in the C1 event at the ICF Canoe Slalom World Championships, has an excellent instructional page that I plagiarized mercilessly for this blog. But only because he wrote exactly what I was already thinking.