A largemouth legend explains the perfect recipes of thump, flash, and color to score more bass 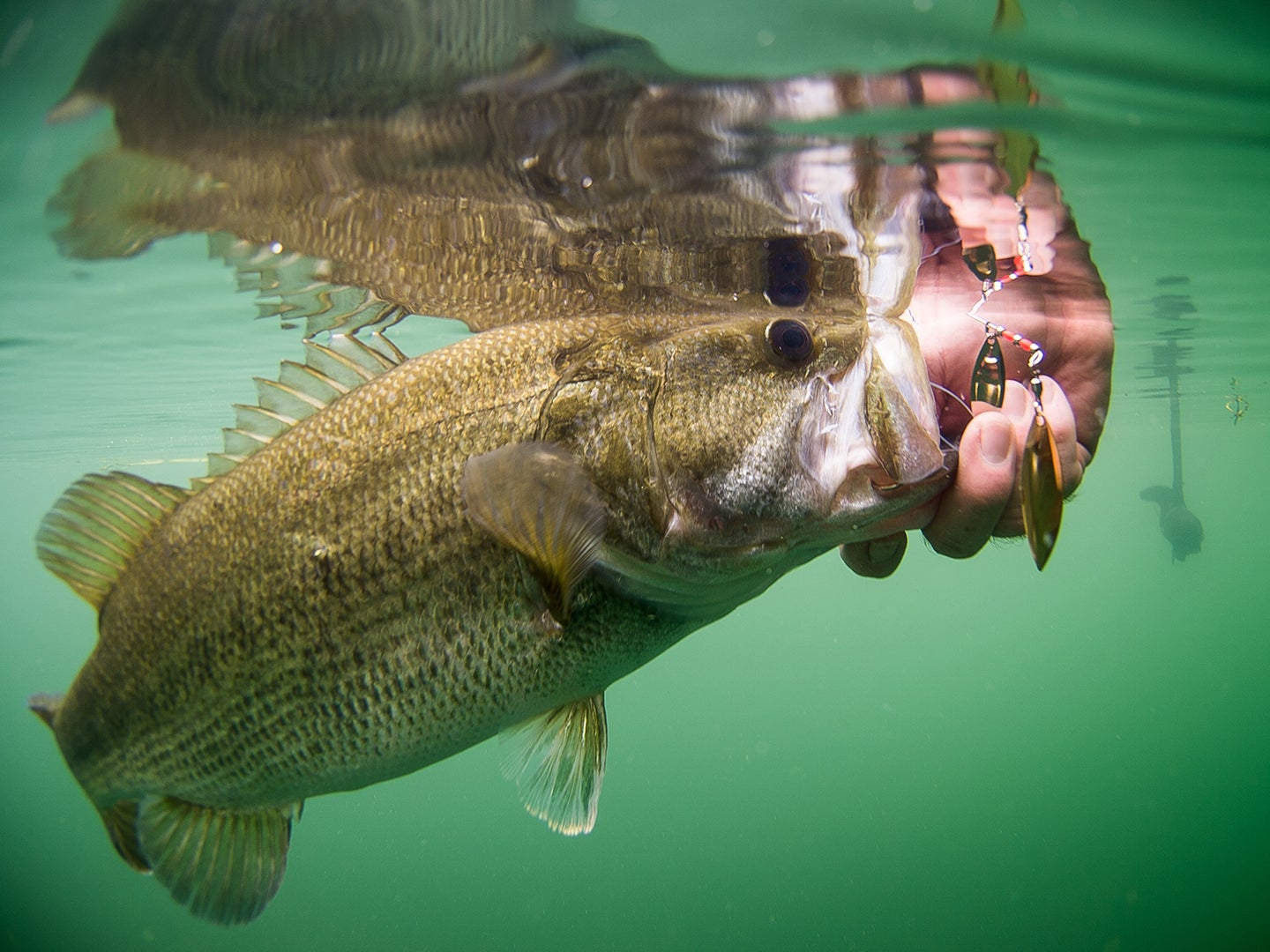 Many weekend anglers default to a 3/8- or 1/2-ounce tandem willowleaf spinnerbait, with one blade gold the other silver and a white or white-and-chartreuse skirt, and they’ll catch fish with it. But by sticking with that one version, they are missing out on chances at some giant largemouth bass. Just ask Lonnie Stanley—owner of Stanley Jigs. After all, the man did not build a fishing-lure empire—not to mention qualify for five Bassmaster Classics, and get inducted into the Texas Freshwater Fishing Hall of Fame—by sticking to default lure choices. When it comes to the best lures for bass, no category of lure gives him more chances to channel his mad-scientist tendencies than a spinnerbait. Here’s how he selects the best spinnerbait blade for bass fishing.

Why Spinnerbaits Work for Catching Bass

When Stanley ties on a spinnerbait, as he does pretty much every time he hits the water, he’s basing his critical blade choices largely on four factors:

Willowleaf vs. Colorado vs. Indiana Blades

“I like a double willow much of the time because willow blades are long and skinny and match the profile of a baitfish,” he says. “But a willowleaf doesn’t thump as hard as a Colorado or Indiana blade, so when fish are feeding by feel I like one of the others.” He recalled the early 1960s, when he fished more rudimentary H&H spinnerbaits with small Colorado blades because that’s all that were available, but now he’s likely to use a much larger single Colorado at night or in chocolatey water, where he needs to grab attention through means other than sight. Finding the best spinnerbait blade for bass can often come down to fishing conditions.

Stanley calls Indiana blades, which don’t have quite the cup of a Colorado but aren’t quite as elongated as a willow, “the in between blade,” and while they don’t get quite as much love as the others, Stanley finds them to be a good solution when each of the more extreme blades—the Colorado and willow—is either too subtle or too overwhelming. It’s a Goldilocks approach to the game, where the middle is just right.

There are of course other blades, like the turtleback, which resembles an Indiana blade with the pointed ends of a willow, and the Vibratron, which looks like a ripped flag waving in the wind. Stanley prefers to keep things simple with willows, Colorados, and Indianas, focusing on other distinguishing characteristics rather than the negligible benefits those specialty blades add, while making them less versatile.

While most blades have consistent thickness from one end to the other, one of Stanley’s key introductions to the market was the Wedge blade, which is thin near the end by the swivel, and almost twice as thick at the far end of the blade. All of that heft spinning around creates more water disturbance even though the silhouette appears the same. A lot of blade heft makes a difference, too. Some manufacturers have tried to make blades of Lexan or transparent plastic for ultra-clear water situations, but they tend not to displace enough water to grab attention, and they don’t allow an angler to remain in touch with what his lure is doing.

Most blades are smooth, but hammered or textured metals can be useful to break up a silhouette or to reflect sunlight in a manner suggesting a pod of young-of-year minnows. These can often serve as the best spinnerbait blade for bass in areas with an abundance of young minnows.

When to Mix and Match Spinnerbait Blade Size

Stanley believes that blade size is often overlooked as a key to spinnerbait effectiveness. While bigger blades will provide more vibration, and smaller ones will allow the lure to stay down on a faster retrieve, everything has to be balanced with the weight of the head and the gauge of the wire. Otherwise it’s possible to overpower or underpower your lure, and it will not remain upright throughout the retrieve. In the early 1980s, Florida anglers developed the “Okeechobee Special,” which featured a large No. 7 or No. 8 willowleaf blade to replicate Florida’s big golden shiners—but on the wrong frame, that hunk of metal would be too much. On the flip side, in recent years anglers have learned that by replacing the two No. 5 willows on a 1/2-ounce bait with two No. 4 blades, they can retrieve the lure faster without it rising to the surface.

When using more than one blade, Stanley stays that it’s critical to be aware of how one impacts the other. “The blade in the front kills 30 percent of the vibration of the other,” he explains. It’s always a balance to maximize the interaction of flash and sonic effects. Indeed, while some lure manufacturers have experimented with three, four, or even as many as seven small blades on a single lure—a miniature, single-hooked Alabama Rig, if you will—the jury is still out on whether that’s worth the extra cost and effort. Nevertheless, Stanley is convinced that even if a growing number of blades doesn’t add weight to his live well, using the right color blades is essential. He tends to stick with two silver blades in clear water or when shad are the primary forage, and two gold blades in dirtier water or when perch and bluegills are the prey. In “in between” conditions, or when the forage is mixed, he’ll utilize one silver and one gold blade.

Stanley also keeps a bevy of painted blades around to mimic specific forage, like regional shad and panfish. Oklahoma anglers, used to that state’s early-season floods, know that a small neon red “kicker” blade in front of a larger gold blade can be deadly. In East Texas, a red Rat-L-Trap is king in the springtime, and Stanley has done very well with Rayburn Red colored blades—blood red with black streaks. Last year he stumbled onto the oddball equation of a red willowleaf, a smaller orange blade, and a pink-and-red skirt…and he absolutely slayed the bass.

All of the rules apply until they don’t. In the gin-clear waters of New England and the Great Lakes, you’d think that smallmouth would prefer diminutive lures in natural colors, but burning a Winnipesaukee Special—a 1-ounce frame with a gaudy chartreuse skirt and matching blades—has been winning tournaments for years. Bubblegum and Day-Glo models have also had their days in the sun.

Finally, Stanley stresses that the best spinnerbait blade for bass alone isn’t enough to get the job done. A poor-quality swivel or wire that’s too thick or too thin will cost you bites and lead to lost fish. “In the ’80s, Rick Clunn told me that he needed light wire for practice to find fish, and heavy wire during the tournaments so his lures wouldn’t break under the stress of a big bass.” That led Stanley to develop tapered wire to complement his tapered blades. “Fish will bend that thinner wire, and after you bend it back five or six times, the next six-pounder may break it. At the same time, a big fish will come up and eat the whole spinnerbait. Heavy wire won’t collapse and you’ll never hook them. With the tapered wire, I don’t even have to use a trailer hook.”

The safety-pin design may pretend to be an idiot bait—one you pick up off the pegboard at random, tie on, chuck out, and wind back. Stanley knows, however, that not only is tinkering the way to catch more and bigger fish, but it’s also a hell of a lot of fun.

“I have 10,000 different colors of rubber for skirts,” he says. “I can tailor them to any situation you find, with the blades to match. We don’t run out when I go fishing.”