How to Tie the Most Lifelike Streamers Ever

Streamers with Tricky Worm tails are so effective, we'd go as far as calling them the Senkos of flyfishing 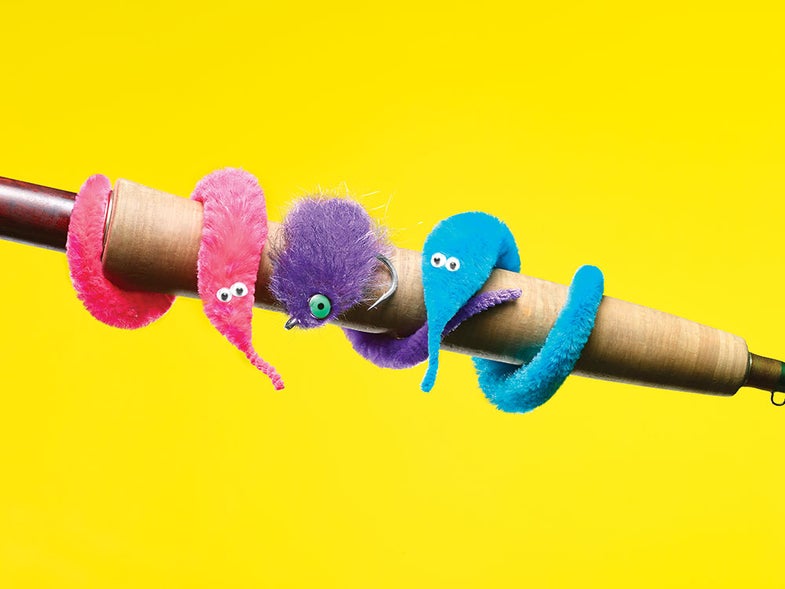 The Tricky Worm is such a lame toy that my 2-year-old isn’t mildly excited when I hand her one. It’s nothing but a 7-inch piece of soft fluorescent chenille tapered at each end to resemble a chubby, snakelike creature, complete with googly eyes. What you’re supposed to do is work the piece of monofilament tied to its nose like a puppet string, making the Tricky Worm magically slither between your fingers and twirl around pencils. I could never make one do any of that. If, however, you decapitate a Tricky Worm and lash its lifeless body to a hook, its real magic is unlocked. So potent is a streamer with a Tricky Worm tail, I might go as far as calling it the Senko of flyfishing. And I’m certainly not the only one who believes this glorified cat toy may revolutionize the stripping game. It has been somewhat of a guarded secret for years, but you won’t have to track down Tricky Worms in dollar stores much longer. They’ll be crawling into a fly shop near you.

I can’t take one iota of credit for finding Tricky Worms. In June 2015, Colton Ruidl, a fan of my web show, sent me photos of some Tricky Worm patterns he’d tied, dubbing them “Ruidl’s Wiggler.” I was intrigued and hunted down my own stash that same week. The first streamer I made had a purple tail, some dumbbell eyes, and a black Laser Dub head. When I swam it, my jaw hit the riverbank. Never before had I seen such a fluid, sexy shimmy in a fly’s tail. Even when paused, the back end undulated and fluttered. It was alive. I knew immediately that by tweaking colors, length, and weight, I could make this fly become whatever I wanted, from a baitfish to a bass worm to an eel and beyond. In the two years since then, I’ve wrecked everything from Saskatchewan pike to Jersey smallies and stripers to Amazon pea­cocks on variations of the fly. While I was doing that, Florida guide David Mangum was wrecking something even more massive.

Mangum discovered the worms in a craft store in 2015. They were called Squirmles, which he says is the name brand for the original version of the toy. After some vise work and coloring with a marker, he hit the tarpon grounds. The flies were so lethal on finicky silver kings that in those early days, to keep them out of public view, Mangum would never have them tied on at the ramp.

“These tails are some of the best things I’ve ever put on my line for tarpon,” he says. “We’ve caught fish to 185 pounds with them. Considering their length, they’re highly castable. A long piece of rabbit strip is much harder to throw. I think this material could replace rabbit strip altogether.”

If there’s one drawback to these worms, it’s durability. Tricky Worm and Squirmle branded tails held up decently; the knockoffs I bought in bulk directly from China practically melted upon contact with water. Mangum has struggled with durability issues, too, which is why I was excited to learn that he recently teamed up with Orvis to create a tougher tail. On the market as Mangum’s Dragon Tails ($7 per pack; orvis.com), this 2.0 version is available in two sizes and useful colors like black, white, olive, brown, and pink instead of mainly kid-friendly fluorescents. Still, despite the shored-up construction, these won’t create a “100-fish fly,” as Mangum puts it.

“To get the longest life out of these tails, you have to fuse them,” he says. “When you finish a tie, hold the tail out and hit the end with a lighter just for a second. Then pinch the tip and roll it toward you to create a sharp point.”

Questions about durability shouldn’t scare you; no streamer lasts forever anyway. Whether you tie a Dragon Tail pattern with a weighted head for jigging action or a weightless version to create a suspending swimmer, I promise it’ll be a lightning-bolt moment when you see it move for the first time. And when the wisest old brown in the river, smartest snook under the bridge lights, or most lockjawed largemouth in the pond eats one of these flies, it’s going to have a lightning-bolt moment, too, wondering how the hell it just got duped.