Hunting Jungle Deer During the Summer Rut in Florida 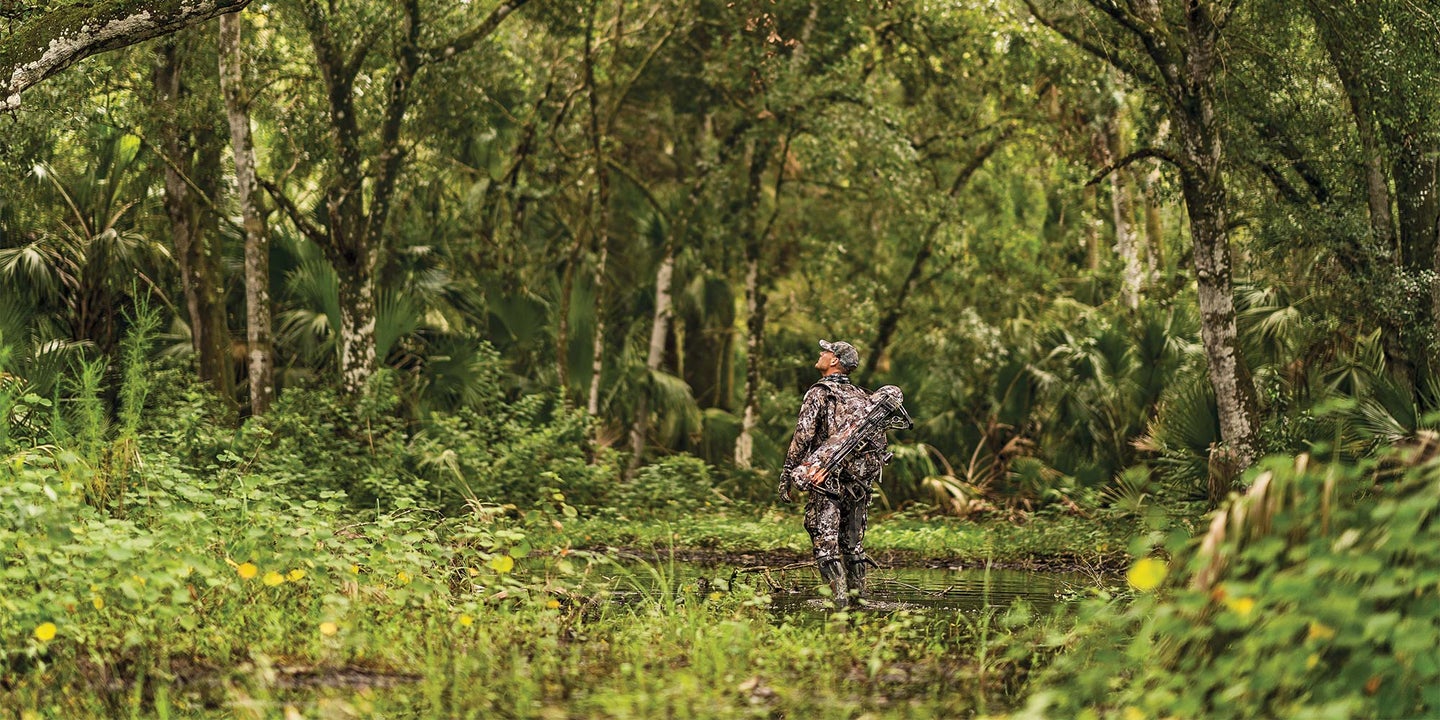 From the treestand, the whole world looked underwater. The tops of alyce clover and deer vetch seemed to float atop a pane of sheet water covering the 3-acre food plot. Behind me, a wall of jungle vines enveloped the flooded canal. Out in front, on the highest ground in the plot, stood three twisted cabbage palms. It was July in South Florida and 94 degrees. I couldn’t imagine a whitetail deer stepping into this scene. Maybe a hippo. Or a T. rex.

The misfires of my soaked Thermacell only seemed to lure the insects. Blackflies and mosquitoes buzzed across my face and up my nose. Microscopic ghost ants, with translucent bodies and coal-black heads, ascended a vine near my bow. Dragonflies with bodies as thick as .410 shells dive-bombed my head.

My cheeks were growing swollen with bites, but for long stretches I hardly noticed. This place was so alive. Two bobwhite quail wandered into view, then flushed at an unseen threat. A flight of butterflies, maybe 100 of them, swirled over the plot on the cooling north wind. Hogs splashed in the canal, and cicadas droned like the sound machine my wife and I use to put our infant to sleep back home.

Near last light, a doe and fawn grazed in and out of the plot. Then I saw the small-bodied, chocolate-racked 8-pointer tracing the route of the does, his nose in the air and then on the ground, his tarsal glands stained black. I was sure he’d follow the girls to the east, but instead he turned and walked directly toward me.

This summer bowhunt started innocently enough. Sloane Brown, a marketing rep for Sitka Gear at the time, and Sitka ambassador Mike Massey invited me to hunt the earliest bow season in the country with them, on a property just north of Everglades National Park.

In Florida, the whitetail rut runs from July to February. This is partly due to the mild winters, which allow fawning to occur almost year-round. But south of Interstate 70, in and around the Everglades, rut timing is also driven by hydrology. The deer have adapted to the ebbs and flows of the rainy season so that fawns are born when water levels are at their lowest in February and March. These close-to-the-equator whitetails are also much smaller than the deer up north. A fully mature buck, one that has survived five or more years in this hostile country, may top out at 170 pounds and 115 inches B&C. In Kansas, he’d be a 200-plus-pound Booner.

“This hunt was looking great until last week,” Massey told us on the first night in camp. He and the lease holder, Caldwell Cooper, planted food plots on June 15 and immediately got photos of bachelor groups with up to four mature bucks each. But then the panthers showed up. Mothers with kittens and big lone males tend to disperse at this time of year, Massey said. He showed us trail-​­camera photos taken a few days before of three cats walking under a feeder. “The best buck on the place was hitting this spot right up until last Monday,” he said. “We won’t see him again.”

Both whitetails and panthers have rebounded from near extinction in South Florida. With sportsmen’s dollars and sound management by the state, whitetails have thrived to the point where the hunter-success rate reached 61 percent in the early 2000s, and it remains high today. The endangered Florida panther hasn’t done nearly so well, but it has been improving. In 2017, the state put the wild cat population at between 120 and 230 animals. But the locals in camp guffawed at these numbers. “We’ve documented 16 different cats and five bears on this lease alone,” Cooper told us, then he fanned through more trail-cam photos on his phone, showing groups of three cats, six cats, and a lone 160-pound male.

“They make this a tricky place to hunt,” Massey said. When panthers move in, the deer disappear from the food plots for weeks. “No place in the East has predators like South Florida. For a deer to make it to maturity here—now that’s a survivor.”

After the cats moved in, the rain came down. Our first planned hunt was a complete washout. Before dawn on the second morning, Massey drove us in to our stands on a jacked-up Polaris. “We’re headed to the driest set we have,” he said. “I don’t know about deer, but we should be able to get a few hogs.” When we turned off the gravel and onto a path leading to the spot, we needed a johnboat. The water was knee-deep as we walked to the plot, which was completely underwater. “You’ve got to be kidding me,” Massey said, and led us out to look for a drier spot.

After a long ride, Massey dropped me off on a piece of high ground near a hog trap. As the sun rose, the bugs came out. I rummaged through my pack and realized I’d forgotten my Thermacell. An hour in, I couldn’t take it. I texted Massey: “You gotta come get me.”

Then 45 minutes later: “Buggy stuck. Will be a while.”

I started walking. Three hours later, sunburned, bug-eaten, drenched in sweat, I met Brown, in a Polaris. “These are the most miserable whitetail hunting conditions known to man,” he said when I got in the cab. “Look at your face, dude!” I put my phone camera on selfie mode. I looked like I had chicken pox. “Having fun yet?” he said.

For some reason, all of the suffering struck me as funny. We’d reached that point where your only choices are to laugh or cry. So we sat in the buggy cracking up.

Back at camp, I took a shower and saw that my entire body looked like I’d been beaten with a wire brush, every inch peppered with red bites from mosquitoes, blackflies, and chiggers. After lunch, we sat in the kitchen arguing over who’d suffered the most during the day’s hunt. Then Chris Derrick from Sitka unveiled a prototype shirt with insect repellent sewn into the fabric.

“Seriously?” I said. “You could have given us this on the first day instead of the third.”

“Or you could have remembered your Thermacell,” Brown hollered from the couch in the other room.

In the early 2000s, some psychologists and ­outdoor-​­adventurers devised what they called the Fun Scale. Type 1 fun was something enjoyable while it happened. Good, simple fun, like plinking in the backyard, reeling in a fish, or sitting by a campfire. Type 3 fun is no fun at all. The marathon during which I tore my ACL at mile 18 is a good example. Then there’s Type 2 fun. It sucks in the moment, but in hindsight it was a blast. This whitetail hunt was shaping up to be that sort of fun. Very little of our time afield had been remotely pleasurable. Each day, we were being eaten alive by mosquitoes, soaked to the skin, overheated, and sunburned. Yet somehow the suffering seemed worthwhile. We were living out a story that we all knew we’d laugh about later: the best, most miserable deer hunt ever. We just needed the deer to cooperate.

When the chocolate-horned buck stopped at the cabbage palms, I was still trying to process the mere sight of him in this place. Big cats, bears, poisonous snakes, insects galore, most of the landscape underwater—and here was this gnarly 8-pointer. He wasn’t the biggest buck on the place before the cats moved in, but he was the oldest. Massey had dubbed him “the Survivor,” and here I was, the out-of-towner, sitting in the hot stand only because I won the rock-paper-scissors shoot-off. As the deer came in, all I could think was, Don’t blow this.

The buck stopped at the two-track I’d walked in on, veered right, and crossed in front of me at what I guessed was 18 yards. I bawled, he froze, and the arrow cut through.

He bolted for the cabbage palms and disappeared over a rise. I checked my phone. There were exactly three minutes of shooting light left. After a while, I got down and checked the arrow. There was good blood but also the stink of guts. My friend Tony Peterson, the first-class bowhunter, nailed it in camp while we gave the deer a little time. “He was probably quartering-to more than you thought, and the exit was a little back,” he said. I thought for sure I’d made a good shot, a broadside shot, but any seed of doubt can quickly grow into full-blown panic. I was worried.

In the dark, the whole camp caravanned on quads and buggies and tractors. Riding along the edge of the plot, I saw the buck lying in the clover and vetch, 70 yards from the stand. I’ve been part of some raucous deer-camp celebrations, but this one was special. Cooper, the lease owner, was thrilled. It was the biggest deer yet taken off his place. “You guys are awesome!” he said while we posed with the buck under the tractor lights. “You’ve gotta come back!”

All six of us replied in near-perfect unison: “Hell no!”

Then we all started laughing.