The Key to Great Late-Fall Grouse Hunting: Find the Fruit

Any grouse cover where apples, grapes, dogwood berries, or any other fruit hangs on into the late fall and winter is money in the bank 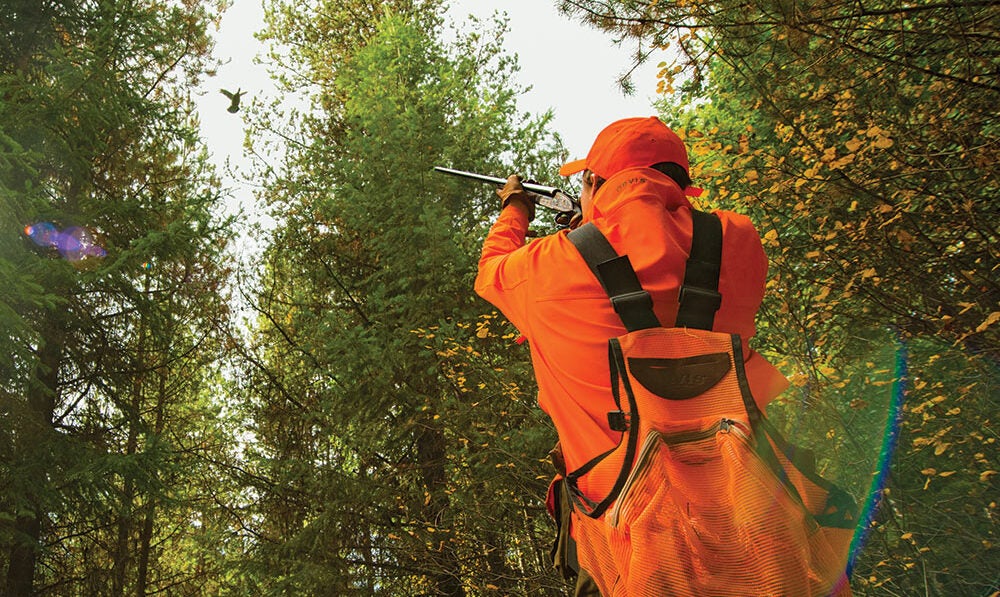 A grouse flees to the canopy in the Montana woods. Brian Grossenbacher
SHARE

Think of them as Macbeth’s witches: a trio of ancient thorn apple trees in my yard. Not that “thorns” does justice to their bristling, hard spikes. If I’m not careful and take one in the thigh while I’m mowing the lawn, my language can turn a cloudy sky blue. Still, the old crones aren’t entirely malign. Sometimes I’ll catch an impression of movement in their tops, look up, and see the silhouette of a crested head. Before the processors kick in and tell me it’s a cardinal, I’ll have a dissociative moment when I think, Grouse! My muscles tense in expectation of that thrilling, hurtling flush.

Maybe it’s an example of sympathetic magic, for whenever I’ve found thorn apples, more often than not I’ve found grouse. Now, after all these years, the connection is part of my wiring. The birds come for the fruit, of course, the blood-red, marble-size haws, and they keep coming, filtering in from far and wide, until they’ve gobbled the last one down.

Late last autumn, a thorn apple–craving grouse led me to the mother lode. We were hunting new country. While the cover looked ideal—a rumpled swatch of brush-tangled aspen interrupted here and there by taller oaks and pines—close to two hours passed without a flush. Tina, my English setter, was busting her fanny and, true to her m.o. when the pickings are slim, stretching her casts farther and farther.

I had stopped to listen for her bell when I heard something that made me prick up my ears. It was a faint but definite rustling, and as I peered through the understory I glimpsed the banded tail and stippled back of a grouse striding along. It seemed to be on a mission, so I went into bird-dog mode, following at a discreet distance, staying in touch but not pressing the issue.

Thankfully, it was an abbreviated pursuit. The bird dropped over a little hump, and when I got there a few seconds later I found myself looking down into a shallow basin that was studded with thorn apple trees. Some were spindly-scrawny, others more densely branched; not all of them held fruit. But enough of them did, with their haws the only daubs of color on the season’s stripped-down canvas. I took a step, and the world exploded.

Aspens are Good. Aspens with Fruit Trees are Better

Early in his career, legendary grouse researcher Gordon Gullion noticed that the birds on his northern Minnesota study area were feeding furiously in the tops of certain quaking aspen trees. One day he took his .22 along—but not for the reason you might suspect. Taking aim, he clipped off several of the branches where he’d seen the grouse and determined that the birds were gorging on male flower buds.

This was one of the first aha moments that led Gullion to develop his thesis, now a guiding principle of ruffed grouse habitat management, that a stand of 10- to 20-year-old quaking aspens supplies everything a grouse needs, including food. Well, yes. Except my experience has been that as long as there’s any kind of fruit on the menu, that’s what the birds will choose. They’ll travel a long way to get it, too, especially later in fall when food in general becomes harder to come by and their caloric requirements rise in response to colder weather. For a grouse hunter, knowing a cover where fruit persists deep into the season is like having money in the bank.

The paradigm in this respect for my grouse-​crazy buddies and me will always be the Old Setter Cover. Maybe 20 acres in size, it was one of those spots that wouldn’t turn your head if you were driving past. Once you waded into it, though, your jaw tended to go slack. The place was a buffet of high-quality grouse food: wild grapes, gray dogwood berries, rose hips, highbush cranberries, wild raisin viburnum, and of course thorn apples. For a hungry grouse—and a grouse hunter—it was heaven.

The Old Setter Cover was good from opening day on, but in late October and November, after the leaves were down, well, I go weak in the knees just thinking about it.

How to Harvest the Fruits of Your Labor

A grouse dove out of the closest thorn apple a split second after I saw its head stretched upward in alarm. I shot over the bird, but another grouse that flushed from the ground wasn’t so fortunate, tumbling at the bark of my Fox’s left tube. Then more birds hammered out as I reloaded, and I snapped breech to barrels just in time to miss a grouse but cut down the top half of a wrist-thick aspen.

By then Tina had reappeared, racing ahead only to hit point so suddenly she was bent like the letter C. I scraped in her direction, reloading as I went, and when two grouse erupted, I connected on one but missed the other. Tina retrieved the bird I killed, a gorgeous, chocolate-brown grouse with glossy green-tinted ruffs and an impressive fan, and as I pushed it into my gamebag I realized I hadn’t picked up the first grouse yet. I’d lost my mark in the confusion, but when I waved Tina in the general direction and exhorted her to hunt dead she found the bird in short order. This bird was gray. When I cupped its bulging crop, it felt like a bag full of marbles.

Related: 10 Grouse Hunting Mistakes That Keep You From Bagging Birds

When your dog is swallowed up by heavy cover, his bell becomes your eyes. It not only tells you his location and direction of travel, but whether he’s working scent or if he’s just flushed a bird. “Using a bell is a win-win,” says guide and professional trainer Steve Grossman of The Grouse Lodge at Little Moran in Minnesota. “The fewer commands you give your dog, the more confidently he’ll hunt. And the less noise you make as a handler, the more approachable those grouse will be.”