Hunting Tactics for 6 Stages of the Whitetail Rut

The rut is a lot longer than one week. Take full advantage of your whole deer season 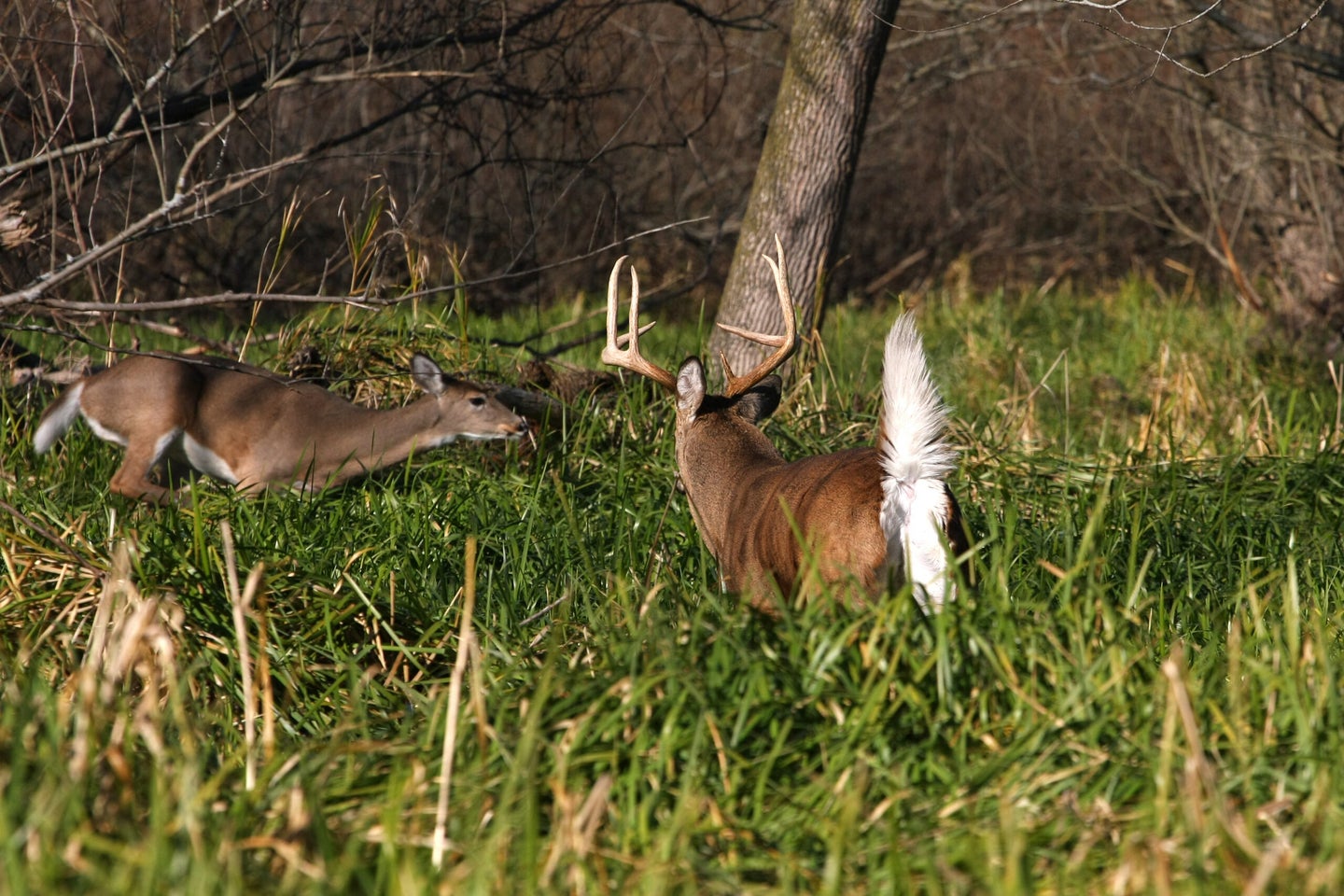 A whitetail buck’s urge to breed—preceded by a drive to establish home turf and defend it against competing males—is the only real chink in a buck’s year-round survival armor.

How many bucks (especially big ones) would we shoot if whitetails didn’t have a breeding season?

On the other hand, how many bucks could we shoot if we simplified the core ideas of how the rut operates, took a big breath, and re-framed the idea of rut-hunting—instead of just focusing on one week in the whitetail breeding season?

As mammals, whitetail bucks can actually breed at any time of year. It’s just that the drive to do so doesn’t really start kicking in until summer begins turning to early fall and male hormones start doing their work to stop summer antler growth, harden those head-topping bone structures, and cause their velvet to peel off.

This is, believe it or not, the first stage of the rut. And you should hunt it. Most bucks live in bachelor groups now and will continue to do so for a few weeks until daylight really begins receding.

Do you hunt early season bucks, or talk yourself out of it? The good news is, bucks can be vulnerable during this stage. One secret is understanding that early-season bachelor-group bucks don’t occupy classic, prime habitat. Those are the kinds of places where does and fawns live and feed.

There’s nothing wrong with hunting those antlerless deer (something I am a fan of personally), and you can certainly shoot a good yearling buck in prime habitat too (also something I like to do). But when a bigger buck is on my mind, or yours, now is the time to head back into the kind of gnarly, secondary, sub-quality habitat that early-fall bucks use as they get ready for the rut.

Those friendly bachelor buck pods don’t last forever. As September turns to October, bucks begin breaking off and start looking for—and establishing—territories of their own. The older the buck, the more solitary he will strive to be.

This is when scrapes begin appearing on the landscape. Some hunters believe these first scrapes mark territory against other bucks, and that’s true. But these early scrapes also serve as signposts for does, advertising there is a buck in the area to service the females’ breeding needs.

Yes, some does will come into estrus this early. We’re talking the first weeks of October here. Biology ensures some does are ready to breed early, and some are ready to breed late (all the way into and through December). This spreads out the concentrated spring fawn drop to reduce the chance of a weather or predatory disaster.

I always have to sort of shake my head when I hear other hunters say they are going to wait for the bucks to really get rocking and rolling—what might be called “peak rut”—before they hunt. Say what? Bucks are out there now at turf setting time. They’re dispersing, breeding-ready, and beginning to look for does. Let’s say you have a line of scrapes, maybe with some rubs intermixed. You’re on a travel route—a place a buck has been, and a place he will come back to—so set up and hunt.

This is the best time of the season to use doe-in-estrus scents because few real does are actually in estrus. Now is also a good time to try that buck decoy: grunt a little too, and try to goad the home buck into confronting the intruder.

Read Next: Best Whitetail States Based on the Record Books

As late October rolls around and buck turfs are established, breeding activity begins in earnest. While it’s true that most does will come into estrus later, mid-October to late October sees enough doe-in-heat activity that bucks are really starting to get active.

Many hunters make the mistake of sitting out the pre-party too, preferring to wait and concentrate on the full-on onset of the “real” rut. But this is prime time, and it’s when a lot of bucks go cruising all day long for doe activity. This is an excellent time to simply hunt natural travel routes, well-used deer trails, funnels, and pinch points.

Become a weather watcher and make a play when temperatures drop into the 30s during the day, and when it gets frosty to hard-freezing (20s or below) at night. Whitetails get active as the weather gets colder, and bucks will travel all day looking for a party. With their insulating winter coats to keep them warm, deer just won’t travel much when daytime temperatures get much beyond the mid-40s. So make hay when the weather cools. 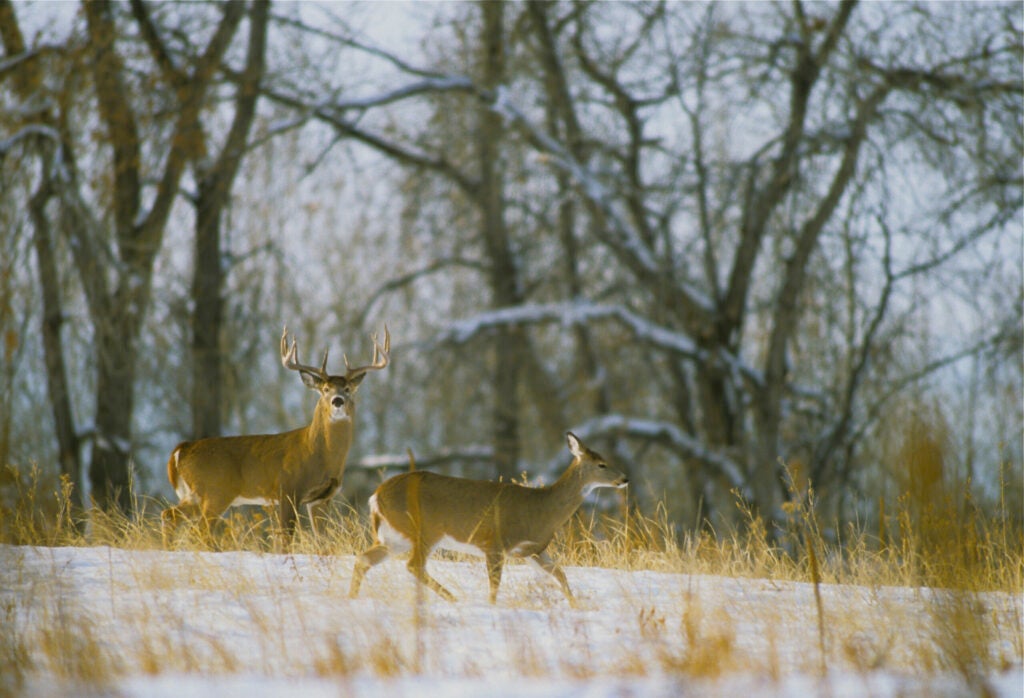 Watch the weather, when temperatures are low during the day, deer will be on the move.

Call it chase, call it pursuit. Either way, the party is just starting when the bucks really begin working the countryside full-time, and the does begin coming into heat. The females’ hormones are chugging now, too, and the bucks can smell it.

Photoperiod drives everything in the rut. That’s the “macro” driver. But day-to-day “micro” conditions (warm weather, bad precipitation) can curtail deer movement. This is also a good time to be on-call and ready to hunt when conditions get right. Anytime it’s cool to cold outside (clear skies or cloudy, it doesn’t seem to matter), hit it hard!

Now is the time to hunt where the does are. They are the objects of the bucks’ affection and pursuits. The beauty of this stage is that the does are just getting ready, but the bucks are far ahead of them in desire. This is why you’ll see does running away from bucks now.

Another good strategy during the party stage is to work the travel corridors and funnels you have scouted—those natural places where bucks are steered or, as I like to say, contoured, as they cruise and chase.

Sooner or later, does begin accepting bucks’ advances. This is when whitetails lockdown and bucks hang tight with does, not leaving their sides. The woods may seem empty, and some bucks may be out of circulation. However, one redeeming quality of the bedroom stage is that not every buck has a potential breeding partner to hang with. Some bucks will still be cruising and looking for a date, trying to get to the bedroom. Breeder bucks will be preoccupied and right on the doe’s tails, and satellite bucks will be working all the angles to try and fight their way in.

There is a specific way to hunt those occupied bucks: Set up in (or right next to) daytime bedding cover—the bedroom—and wait there, where the does (and hence the bucks) want to be. Pack a lunch, get up in a tree, and stay all day.

When does the rut end? When you quit hunting for the year.

While it’s true that breeding activity slows considerably as the bulk of does get bred and bucks get tired, it’s also true that younger does (year-and-a-half olds and then, even later, the year’s early-born fawns) come into estrus after the calendar hits December.

It’s cleanup duty now. There are still breeding jobs to be done, but it’s not an active or aggressive pursuit on the bucks’ part. “Opportunistic” is more the watchword.

Now is the time to get into the prime habitat where the does and fawns retreat—good cover near prime feeding areas. Bucks aren’t usually actively on the lookout for does, but bucks still like to hang near the females if for no other reason than to eat well, have an extra set of eyes or two around for safety, and maybe even get lucky.

Read Next: Find These 6 Types of Deer Beds to Zero In On Big Bucks

Hunt The Whole Season Through

Rather than a one-week event in which to put all your hunting effort, the rut is a full process that lasts all autumn long and consists of distinct stages, any of which can, when hunted with the right strategies and approaches, put a buck on the meat pole.