American Hunter Bags “Man-eating Dinosaur of a Croc” in Africa

Garrett Wales shot the Nile crocodile from land with a .33 Nosler. The giant was 15 feet long and likely weighed more than 1,000 pounds 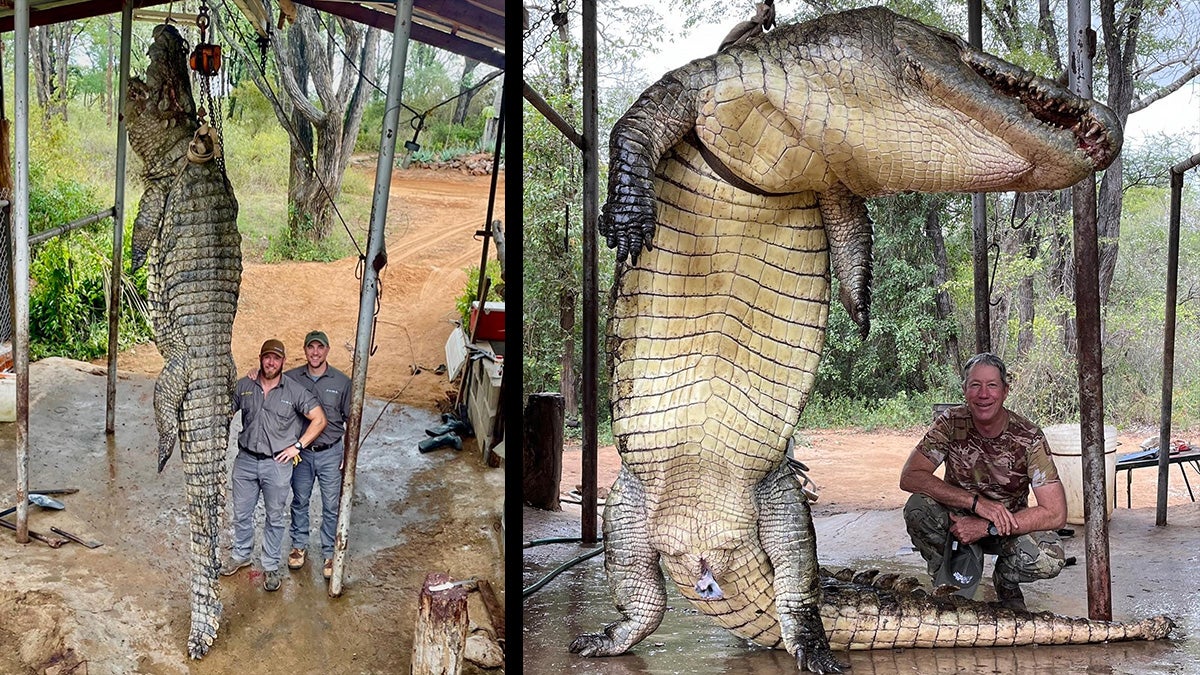 Garrett Wales of Brock, Texas, recently shot an absolute monster. Wales was on a 10-day hunting trip at Humani Ranch in the Savé Valley of Zimbabwe. He’d hunted for several days and made a few kills before turning his sights on a crocodile. His trackers heard something that piqued his interest. “As we were getting ready to head out, they had been talking to some other locals in the village,” Wales tells F&S. “They came back and said ‘hey, these guys are saying there’s this crocodile out in an irrigation pond.’ Now, when we say irrigation pond, it’s full of vegetation. There was this legend of this croc that lived there, but no one we knew had actually seen it.”

The irrigation pond was a place the locals used often to get water, wash clothes, and sometimes even bathe in during the summer. Wales said the giant crocodile posed a threat to local safety—and wanted to try to help while enjoying his hunt. His guides put out some bait and returned the next day to check on it. It was untouched. “As we were walking out, all of a sudden, my PH stops,” Wales says. “This thing was sunning in the reeds. He lays eyes on it right before it slides back into the water. I didn’t see it but he confirmed the crocodile was a monster.”

Wales and his guides decided to hunt the crocodile hard for the next 5 days, walking along several paths next to the pond several times each day. Two days later, they saw the croc, but it slid into the water and escaped before Wales could get a shot opportunity. On the 5th day, luck was on his side.  “We were about to go in for lunch, and we decided to make one more lap around the irrigation pond. Lo and behold, we come around the corner and were expecting to maybe see him in the reeds, but he was on our side of the bank just 5 to 7 yards from us.”

Wales held his fear in check and shot the crocodile at 7 yards from land with a .33 Nosler rifle. The Nile crocodile is one of five species of crocodiles in Africa. They live throughout sub-Saharan Africa, the Nile Basin, and in Madagascar. According to National Geographic, they can grow up to 20 feet and 1,650 pounds. Some 200 people are estimated to die from fatal crocodile attacks in Africa each year. Most crocodile hunting takes place in central and southern Africa, where hunting fees play an important role in wildlife conservation.

As for Wales’s crocodile, it took 9 people to heave it onto the back of a truck. It measured 15 feet, with several feet on the tail having broken off from an old wound. Wales estimates it was 1,000 to 1,200 pounds. “[It’s] a proper, man-eating dinosaur of a croc,” Wales wrote in a Facebook post. “It was an experience I’ll never forget.”

Wales says the five-day hunt was special for special reasons—from overcoming his fear in close quarters with such dangerous game to seeing the local villagers celebrate his kill. “I’ve hunted all my life and I’ve never experienced anything like it,” he says. “It was as insane as it gets in the hunting world.”