Are High-Dollar TSS and Bismuth Goose Loads Really Worth It? Yes, They Are 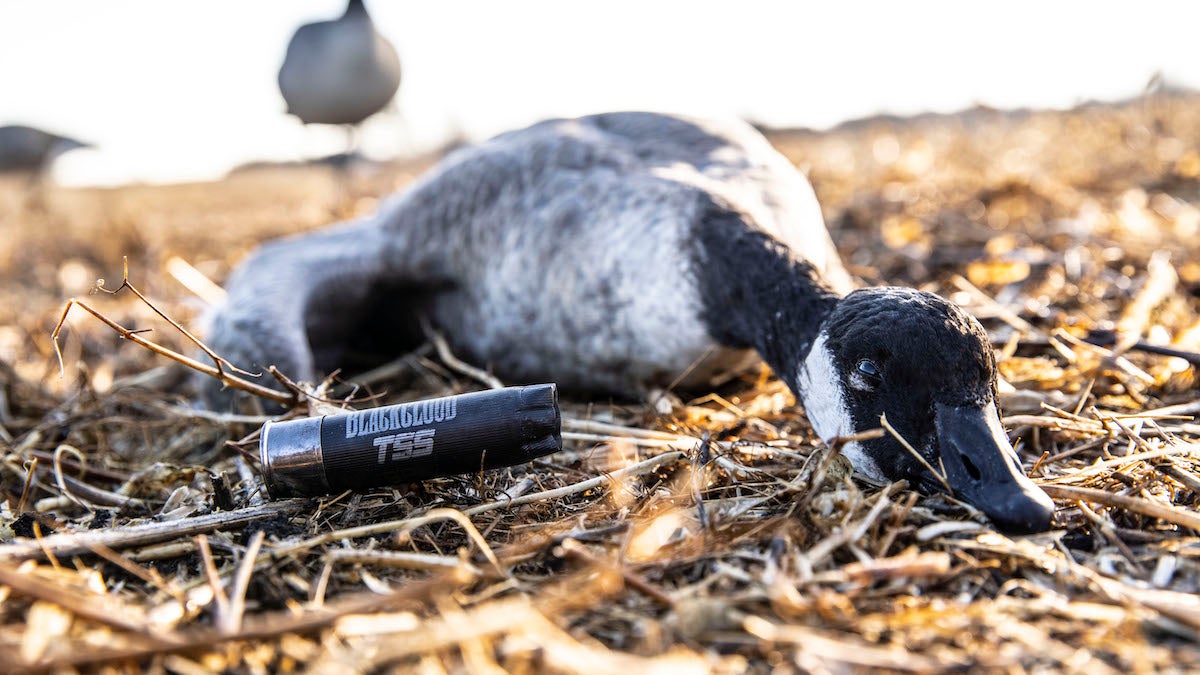 Flakes of snow were falling on our hat brims as the geese finished. These were big honkers, not the cacklers and lessers so common in our area. We knew this going in. We’d scouted the field for four days while waiting for Mother Nature to get in a nasty mood. When the giant Canadas dropped their feet, and the steel started flying, only three birds fell. There were five of us in the decoys, and we all fired three rounds apiece. I thought maybe it was just a lousy volley, but the story was the same on the following three groups of birds. One or two birds would hit the ground outside the decoys, pop up, and start walking away. A couple would sail 400 or 500 yards, and, sadly, a few carried their injuries far enough that they made it out of sight.

The hunt quickly turned miserable. Our dogs were getting thumped by the massive wings of wounded birds, and several of us missed good shooting opportunities because we were off chasing cripples. We were shooting what was considered good steel at the time, but I knew that something had to change.

Goose hunters are a hardcore crowd. We embrace conditions that would make a polar bear shiver. We get up extra early to set out hundreds of decoys before first light. We do all of this hoping that migrating geese will see our fakes, cup their wings, drop their feet, and backpedal over our spread. We spend a fair bit of money on it too. Think of the cash you’ve dropped on the best flocked decoys, calls, layout blinds, blind bags, shotguns, and on and on. So, given how hard we work and how much money we’re already spending, why would you take a chance on anything but the best ammo?

While steel is still popular, more and more goose hunters are making the switch to loads filled with tungsten or copper-plated bismuth or a mix of these and steel. Most hunters who haven’t yet argue that premium loads are just too expensive. But in my experience, that’s just not the case. Yes, the up-front cost seems steep, but shooting the good stuff has proven absolutely worth it in the end.

Making the Switch From Steel To TSS or Bismuth

To find out for sure, I did my research, dropped some cash, and invested in three different high-end loads: Federal Premium Black Cloud TSS, BOSS Copper-Plated Bismuth, and Hevi-Shot Hevi-Metal. The 3-inch Federal TSS contained a mixture of BB FliteStopper Steel and No. 7 18g/cc Tungsten Super Shot. From BOSS, I went with the 3-inch blend of No. 3 and No. 5 Copper-Plated Bismuth, and my go-to from Hevi-Shot was 3-inch No. 2 steel shot led by No. 2 bismuth.

First, I patterned each load at distances of 20, 30, and 50 yards. I immediately noticed that the 1-1/2-ounce payload of BOSS No. 3 and No. 5 Copper-Plated Bismuth put a good number of pellets on target at each distance. The TSS from Federal followed suit; however, at a distances to 40 yards and beyond, you see fewer of the No. 7-shot holes but still plenty from the FliteStopper BBs. The 1-1/4-ounce payload Hevi-Metal No. 2 shotshells held an ultra-tight pattern at 20 yards, and a uniformed pattern at 30 and 40 yards that was super impressive.

Of course, pattern testing doesn’t mean a hill of beans if the loads don’t perform in the field, and I was excited to give each a test run. Over a week, I shot all three loads over decoys at cacklers, lessers, and giant Canada geese. My farthest shot distance was 58 yards. My takeaway: I will never again shoot anything for geese other than TSS, Copper-Plated Bismuth, and loads that contain a mixture of both steel and one of these other metals.

The first group on the first hunt of the week was a flock of nine huge Canadas. My two hunting partners were parking the trucks, and I was in the decoys alone. I had three of the BOSS shells loaded in my Browning A5, and the result was three stone-dead geese in the decoys. No wounded birds. No birds sailing back toward the river.

I got the same result when shooting the Federal TSS and Hevi-Shot. Due to pellet count and how hard the Copper-Plated Bismuth seems to hit at ranges between 20 and 50 yards, my top choice was the BOSS, but I melted geese with each load. I discovered that I shot fewer shells and killed way more geese when shooting these quality loads. I wasn’t having to put two all-steel loads of BBs into a single goose. With the tungsten and bismuth, I was killing a goose on my first shot and was able to move on to the following bird. I wasn’t chasing wounded geese around in the decoys or watching my dog get slapped upside the head by the wing of a giant Canada. Due to the number of smaller-sized shot, it also became apparent that I was missing fewer geese.

Is TSS and Bismuth Is Too Expensive? Do the Math

Few will argue with the killing power of these loads, but many will hate on their price tag. Before you do, consider the fact that you shoot fewer shells to fill a limit with these loads. Also consider that a case (200 rounds) of 3-inch BOSS No. 3/5 will run you $325, about $1.63 per shell. A case of top-end steel averages between $250 and $300 for 250 rounds, or between $1 and $1.20 per shell. A case of Hevi-Metal (250 rounds) in popular goose shot sizes will run you between $360 and $380, or around $1.50 per. It’s hard to argue, when you consider their killing power and the fact that you’ll shoot fewer shells, that these loads are too expensive.

Read Next: Suddenly Everyone Wants a Sub-Gauge Waterfowl Gun. I’ll Stick with My 12, Thanks

Each winter after goose season, I put away some cash in March, April, and May—a little here and a little there. Then in June, I order a couple of cases of shotshells for goose hunting. Going forward, I’ll save a little extra and get the good stuff, and I recommend you do the same. You’ll kill more geese with fewer shots and most of those geese will hit the ground stone dead.