Doug Hampton took a 213-inch Hawkeye State slammer last year. The hunting was so good, he packed up the family, moved to Iowa, and tagged another trophy this fall 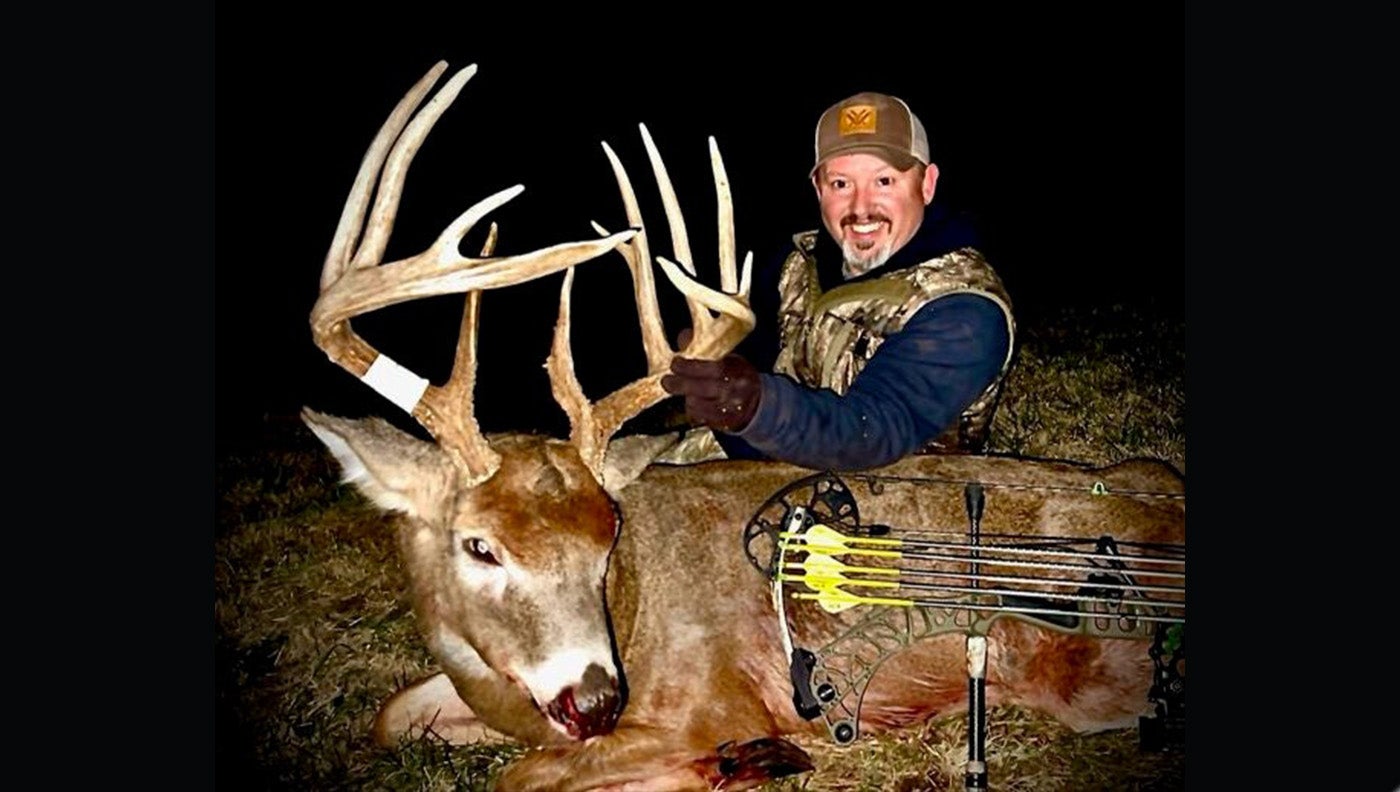 Doug Hampton has a passion for big Iowa whitetails. He took his biggest buck ever with a lever-action rifle last year, a 26-point Hawkeye State bruiser that taped out at 213-5/8 inches. Unwilling to wait multiple years to secure nonresident tags, Hampton followed up last year’s deer by selling his Arkansas house and relocating his family to a farm in southern Iowa. There, he could purchase resident tag while hunting not only his own property but also making self-guided hunts with his bow on a nearby outfitter’s land.

The plan worked out. A couple days after Thanksgiving, Hampton ran an arrow through the vitals of his biggest-ever bowhunted buck, a beast that gross-scored 175 inches. Hampton tells F&S that if wasn’t for a busted tine, the deer would have topped 181 inches.

He hunted the deer a remarkable 59 days, passing up 16 other bucks sporting racks that he estimates went from 145 to 160 inches.

“When you set out to hunt one special deer, you have to be willing to eat a tag,” Hampton says. “I get a buck on my mind, and it becomes him or nothing.”

Hampton first saw the deer he nicknamed “Boots” on a trail camera in early September. “I knew then this was likely the buck I’d be going after,” he says.

The problem, as is the case with most mature bucks, was that Boots was almost entirely nocturnal as archery season progressed. Hampton was hunting the edges of bean fields, and he periodically juggled the placement of his trail cameras trying to figure out the bucks seemingly random behavior.

Frustrated, Hampton switched from hunting field edges to hunting funnels in what he felt was the buck’s home range. He finally encountered the deer on November 20. “I noticed which way he was heading and figured out he was moving to a more favorable rutting area, a cut bean field half a mile away where does were concentrating,” he says.

The challenge with this area, from a hunter’s standpoint, was that it was devoid of trees—nowhere to hang a stand. Hampton’s answer was to move in a hay-bale blind and position trail cameras at the corners of the field.

“I finally got photos of him cruising for does in late afternoon. This was the only place I’d ever caught him daylight,” Hampton says. “I figured then it was just a matter of time.”

Hampton uses a full-body buck decoy when hunting. He says does often shy from the decoy, but it regularly pulls in buck challengers. On Nov. 22, he spied the buck tending a doe. The curious doe approached the blind, with the buck in tow. “But she got spooky and left, taking him with her. He was 49 yards away,” says Hampton.

After the hunt, he adjusted the blind position, moving it closer to where the deer had entered the field from a scrubby thicket of small cedars. That evening was another close-but-no-deal proposition. The Thanksgiving holiday was next, with Hampton taking a multi-day break for a family gathering in Arkansas. He hoped buck would still be around looking for another doe upon his return. He made a final adjustment to his blind on November 28.

“Deer had been cutting the edge of the field. I moved it closer to that shortcut and then positioned the decoy as a blocker to deter any deer that might want to go around me,” Hampton says. Deer began appearing at 4 p.m., and does kept looking toward the area where he expected the buck to come from. “The wind was blowing scent from the bedding area to the field, so I figured he was in there.”

Just before dark, the buck appeared from the brush and started following a doe. “He saw the decoy and postured a little, but stayed with the doe. He acted like he was thinking about returning to challenge the buck decoy but then turned broadside at 35 yards. I put the 30-yard pin one-third of the way up the body, knowing he’d react to the shot, and squeezed the trigger,” Hampton says. “I knew by his reaction it was a perfect shot. He turned and ran into the cedar thicket, sounding like he was tearing down every tree on the way.”

Hampton returned home, giving the deer a couple hours and then returned, following a huge blood trail to the big buck piled up in the small trees.

“It was 44 degrees that evening—my old football number,” he says. “For some reason, I thought that it meant I might have some luck.”