Are bucks locked down with does or holed up from gun-season pressure? Here how to get them on their feet and onto your wall 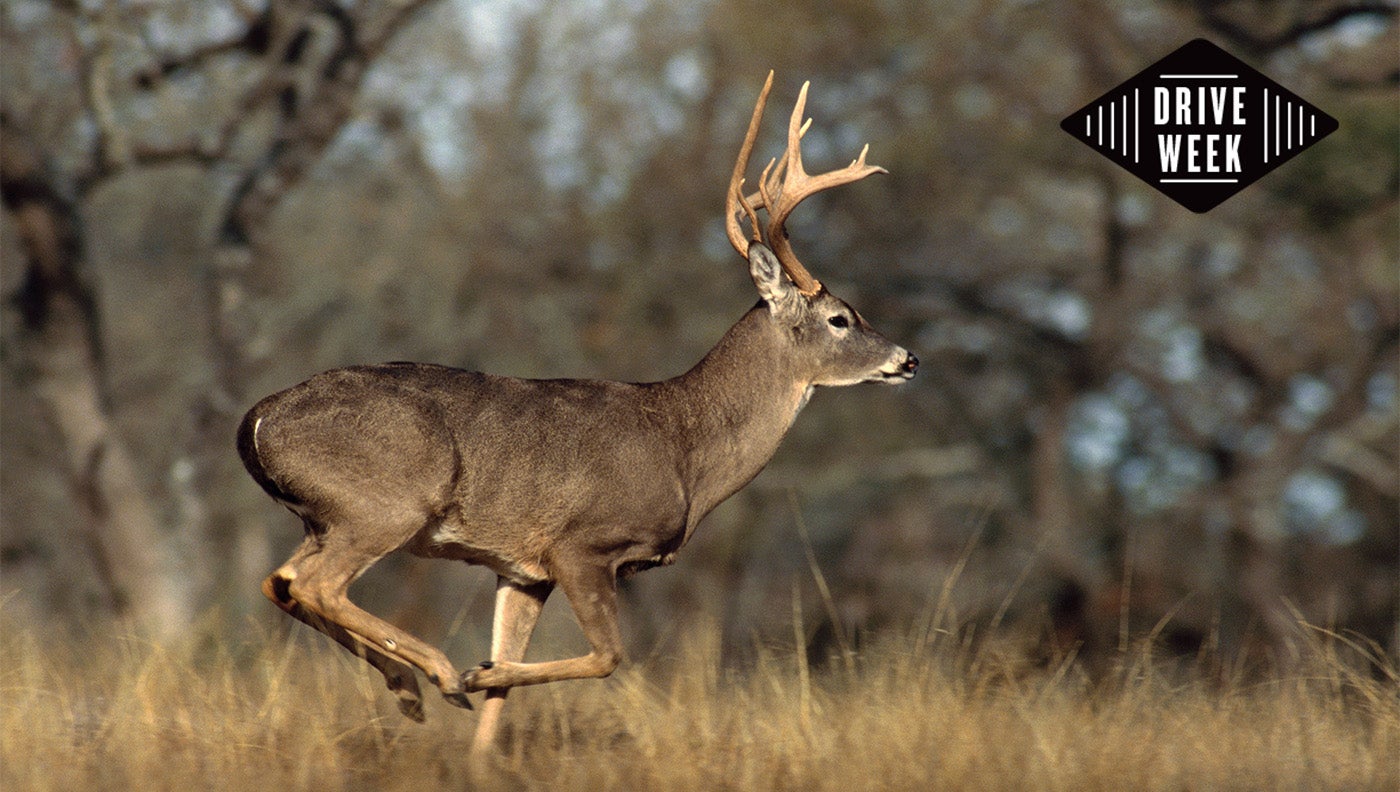 Hunting from a stand or blind is obviously a proven way to arrange a meeting with a monster. But what happens if the bucks you’re after just aren’t moving on their own, say because of lockdown, or because bucks are feeling the pressure from the annual firearms opener? If you’re hunting during these windows, waiting for bucks to move naturally might be fruitless and forced movement may be the only way to get a buck on his feet.

That said, you don’t have to gather a dozen hunters ready to whoop and holler and bust through the timber like a marching band. You can use subtler drives with just one or a few fellow hunters to get temporarily sedentary bucks up and moving , and then go back to stand-hunting and still-hunting once bucks start moving again. Here are five proven drives that can put an otherwise hunkered down buck in your sights, or the sights of a good buddy.

Right at the peak of the whitetail rut, you’ll often spot a buck and doe paired up in some oddball, isolated cover, like the edge of small cattail swamp or a patch of brushy cover around a rock pile in the middle of an ag field. You’ve probably read, on this very website, that this is a good opportunity to put on a stalk. But if you’ve got a buddy or two handy, your stalk can easily turn into a successful drive.

First, take your time to study the terrain and wind to figure out the best way to conduct your stalk, as you always would. But in this case, also ask yourself: If the stalk goes bad and you bump the deer, where are they mostly like to go and how will they get there. For example, you can assume that, if bumped, the deer will likely head for the nearest security cover, and they’ll probably use some terrain feature, like a swale or low point in the field, or cover feature, like fence line or hedgerow or strip of standing crops, to get there. That’s where a buddy or two should sneak in and act as standers, or posters.

If your stalk works out, great. If it doesn’t, your buddies are in place to back you up.

Trying to push bucks into open cover—the intent of most drive hunters—is rarely effective, especially on mature bucks. “Older bucks, especially those who have seen some pressure, don’t want to expose themselves,” says Wisconsin big-woods expert Tom Vandoorn. “Their instinct is to circle and hide, which is a weakness you can use to your advantage.”

Vandoorn’s answer is the wagon-wheel drive. “It’s really a drive in name only,” he says. “You’re not trying to push whitetails anywhere in particular, you’re just bumping them up and letting them do what comes naturally.”

Step one is to grab a lightweight, portable tree stand (don’t worry, nobody is sitting for long). Then take a buddy and walk to a clear-cut, swamp, or overgrown beaver pond where a stand tree offers decent shooting. Hang the stand, have your buddy climb in, and then you walk straight away from him on a line toward the most likely bedding cover—a dense thicket, a dry hummock in a swamp, or tall grass lining a stream. “When you bump a buck, he’ll run away to avoid danger, at first,” Vandoorn says. “But then, he’ll almost immediately circle back, potentially giving your buddy a shot.”

Once you reach the edge of the thick cover, just double back, switch roles with your partner, and repeat the process. Viewed from above, the paths of the drivers looks like the spokes of a wagon wheel. Once you feel you’ve worked the best cover in an area, pull the stand and head to a new spot, assuming you’re not dragging out a pair of trophy bucks from the first hunt.

In the classic concept of a drive, pushers goad bucks to their feet and posters set up at distant exits, waiting for a shot. But what happens when you don’t have a big crew of fellow hunters to make that happen? Early on, my cousins and I learned that you can run a very effective drive without using posters (in the traditional sense) at all.

Like the wagon wheel drive above, this one works best in dense bedding/security cover, like a swamp, marsh, or logged-over area. Line up the several drivers with the wind at their backs, blowing into the cover. Agree on a start time and a timed interval, such as one minute. When it’s time to start, the driver on one far end of the line starts, moving slowly and quietly into the cover. After one minute (or whatever the interval is), the first driver stops and the second one starts. That hunter then moves ahead for a minute while the first guy waits. Then that hunter waits while the third driver moves ahead. Then repeat.

After everyone has made a one-minute drive, you simply repeat the process for as far as your have good cover. This works because when a buck is jumped, he’ll run straight-away to escape immediate danger. But as soon as he feels safe, he’ll want to circle, to get the wind in his face again. And because drivers aren’t making any (or much) noise, the buck will often present a shot to someone along the line.

The keys to success are keeping it slow and quiet. You don’t want bucks to be in a panic here. Remember, a buck is a lot like a cottontail rabbit; his instinct is to circle back to where he feels safe, and if he can have the wind in his face as he completes that circle, even better. As my cousins and I learned in a hurry, most bucks we tried to push to a distant location never make it there, which means that the pushers on this drive have as much a chance at shooting a buck as the “posters.”

This is another drive that can work with a minimal crew and is not so disruptive that it runs deer off your ground for later in the season. Because bucks navigate steep terrain in a fairly predictable way, this hillside push can be done with only one or two drivers and three posters.

The driver starts on the top edge of the hill and moves laterally across the face. Since most bucks will be bedded high on the hill, a patient and thorough push will usually get them on their feet. That said, benches farther down the hill can also harbor bedded bucks. When the driver reaches a point above a bench, he can either slide downhill and keep pushing, or he can simply pitch some stones or roll some rocks and flush a bench-bedded buck. Obviously, if you can afford two pushers, simply skip the rock-tossing and position a second pusher midway on the sidehill; this driver will get sidehill bedders on their feet.

Posters should set up in three key locations on a hillside drive. One should remain high on the hill, as a fleeing buck bumped at the top will often maintain his elevation. This is especially true if there’s a steep wash, or ravine, that limits the spots where bucks can cross it, as one of the best crossings will be at the top of the wash. At least one poster should also be situated at the bottom of the hill, as there is often a good crossing there, too. Finally, the the bench in the middle of the hill continues around to the end of the ridge, you’ll want a poster there. Buck love to elude top and bottom posters by staying in the middle of the hill, and this is how to get a step ahead of them.

If you’re lucky enough to have lots of good linear deer cover—such as creek and river bottoms surrounded by fields, or wooded draws in prairie habitat, then all you need is a buddy or two and a steady breeze to subtly drive deer to each other all day long. One hunter simply zig-zags through the cover from upwind, while the poster or posters set up a good ways downwind in a pinch points that offers good visibility or overlooking a hub that offers multiple escape routes, such as where a wood line, feeder creek, or a brushy fencerow meets the main line of woods.

The key here is to just nudge deer along. Walk quietly, letting your scent drift toward the cover in front of you as you go. You don’t want to bust deer out of the creek bottom or draw, you just want to move them down the line—to your buddy or buddies. Once you meet, you can switch roles and start again, working farther on down the linear cover.

In the case of isolated wooded draws in prairie county, it’s a good plan to wait until the morning sun hits the hillsides and starts pulling thermals uphill. By that time, bucks are apt to be bedded in those draws. Have one hunter sneak into position at the top of the draw, where there’s good visibility into the cover as well as into the open grasses above. Then the other hunter moves into the position at the bottom, zig-zagging quietly while his scent rises up to bedded deer and nudges them up the draw to the poster. At the next draw, switch roles, until both of you have filled tags.