Spinning-wing decoys can spook as many late-season ducks as they lure if you don't use them correctly. Here are four motion-decoy must-dos 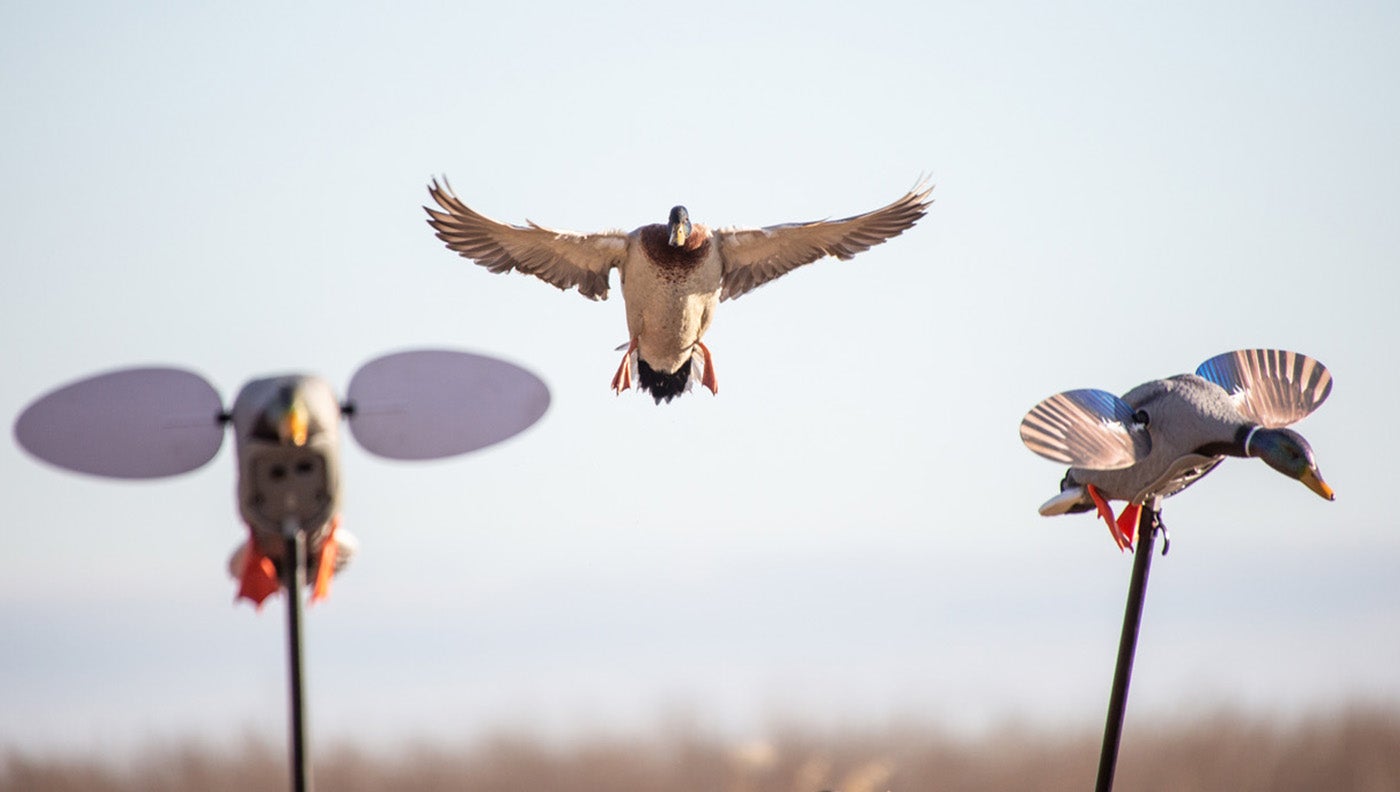 A drake mallard drops in, lured by a pair of Mojo Elite Series spinners. The Fowl Life
SHARE

When spinning-wing decoys first took off, and for quite a while afterward, they really did work like magic. It didn’t seem to matter if the birds were low-flying teal or high-flying mallards. It didn’t make much difference where you put your spinnners, either, or how many you used. As long as you had one or two where the ducks could see them, those birds were going to drop their feet and land, utterly mesmerized by the twirling plastic wings animating your spread. But times have changed. Waterfowl have gotten wise to—or at least wiser about—motion-activated decoys. These electronic fakes still help, but these days, it really does matter how you use them—especially for warier late-season ducks. Here are four keys to getting the most our of your motion decoys now.

1. You Need Total Control of Your Spinner Decoys

During early teal seasons, you can get away with stacking three, four, even six spinning-wing decoys in the spread, turning them on, and letting them run while flight after flight of blue- and green-wing teal keep you busy shooting. But you can’t get away with that now that the teal are gone and the bigger ducks you’re after have already been hunted hard.

For mid- to late-season puddle ducks, you need to have total control over your spinners. And for many of you, that probably means upgrading to decoys that allow you to turn the wings on and off remotely. MOJO’s Elite Series spinners are a good example. They accept the addition of a Bluetooth Remote Control, which slides into the bottom of the decoy and pairs with your smartphone. Once that’s set up, you can activate and deactivate the wings at any time. This save battery life, of course, but even more important, it lets you spin the wings for distant ducks or when duck are banking and then turn them off when ducks are close and staring right at the decoys, which prevent flaring them.

It helps to think of your motion decoys like the sounds you produce on your calls. You wouldn’t blast a ringing hail call when birds are about to finish. By the same token, you don’t want wings swirling when orange feet are down. Instead, you use that hail call to grab attention, and you should do the same with your spinners.

2. Try Getting Your Motion Decoys Out of Your Main Spread

When hunting pressured puddle ducks on the water, I like a pair of spinners, but I don’t place either in my spread. Instead, I’ll tuck them 10 or 12 yards away near cover, if possible. If hunting moving water, like a river or a creek, I’ll put one spinner upstream of my main spread and one below.

The reason I put them near cover is because wings flashing through brush and debris look natural. They grab attention without alarming a flock. If the ducks turn and start to come, I shut the wings down immediately. The reason for up- and downstream is because I like to turn the wings on when a group of ducks buzzes past spread but continues up or down the waterway. If I hit the wings after the ducks pass by and add a comeback call, birds will often turn. As soon as I see them begin to bank and swing around, I turn the wings off again.

3. Change Up the Plan for Foul Weather Field Ducks

When hunting field ducks in snowy weather, I take a different approach. I like a big set of duck and goose decoys for starters, and I use four or five spinners. The key is to keep the spinners out of the exact area where you want the ducks to finish. I set two outside of the spread, positioned at the decoys’ furthest left and right points. The other two are mixed in with the spread. Remember to set the spinners so they are facing into the wind, because that’s how real ducks would finish.

I’ll keep all of the wings spinning when the ducks are in the distance, and then, as they get closer, I’ll leave the spinners to the far left and right going and shut down the two within the spread. This movement simulates birds landing on the outside of the spread, and if the snow is flying and the clouds are soupy, decoy shine not going to be a big problem.

Another great field tactic, especially if you’re running traffic and not on an X, is to have any two decoys going and then start the other two. Then, shut one decoy down while three are going. You get the idea. Unlike geese, ducks don’t sit long in a field. They feed, spring into the air, make some passes and then sit right back down. It’s never-ending movement when ducks are grubbing in a grain field, and this spinning-wing tactic simulates that type of erratic movement.

One motion-activated decoy that seems to fly under the “must-have” radar of waterfowl hunters is a shaker-style floater. These decoys operate off a battery and wobble slightly back and forth in the water. The result of the wobble is a small wake, and to ducks, this wake looks like natural on-the-water movement. Shaker decoys are very economical, and they are money when hunting lakes, ponds, and marshes. Unlike with spinner, shaker-style decoys can be turned on and left on even for late-season ducks, because the movement they is not just realistic, but subtly so. Add a couple of these to your still-water spreads and use the advice above to turn a spinner’s wings on and off at the right times, and you’ll kill more birds.