The answer is, it depends—on caliber, velocity, and what big game critter you're after. Here's how to choose wisely 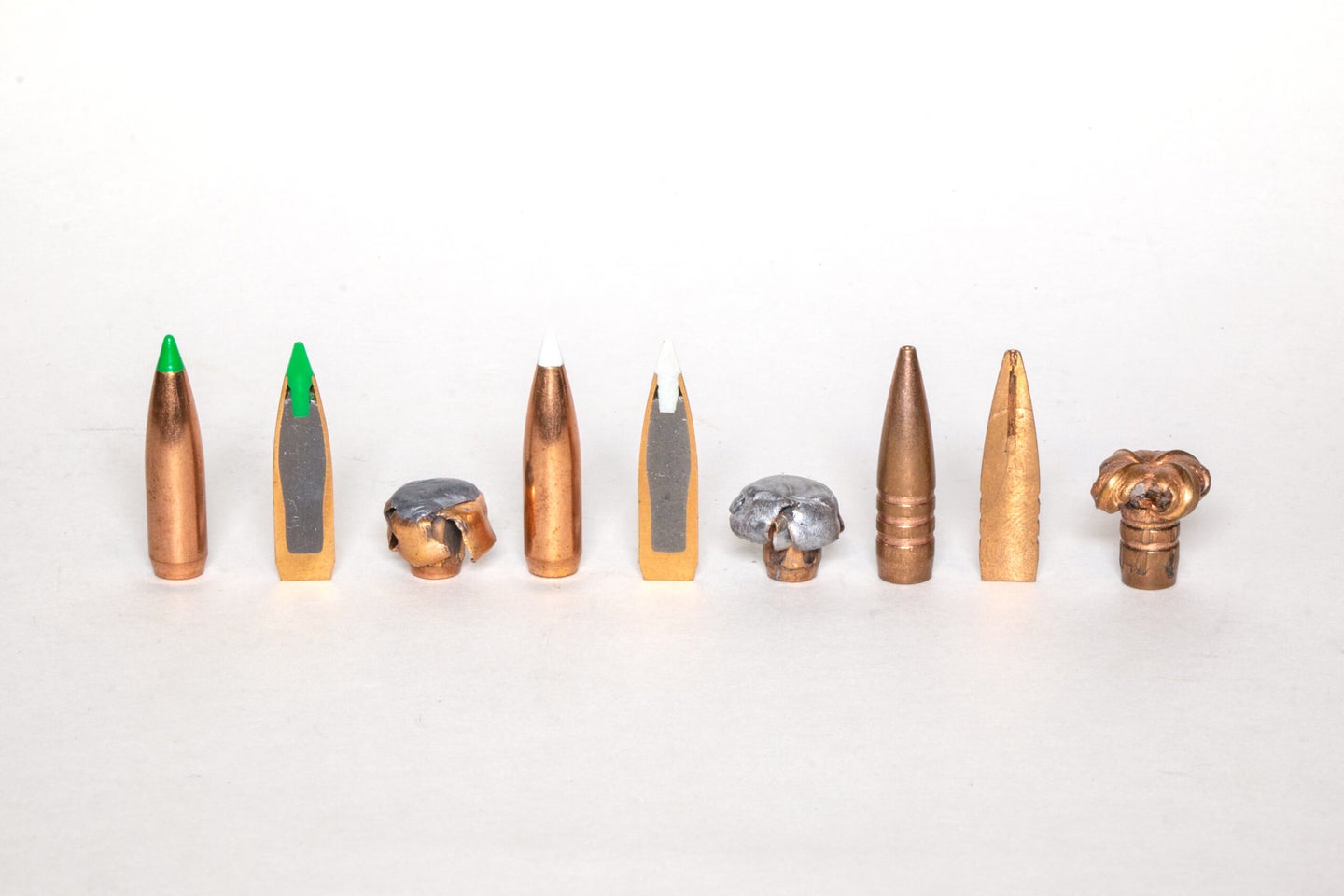 From left to right, jacketed, bonded, and mono-metal bullets all kill in generally the same way but are designed to do the job differently. Richard Mann
SHARE

Go to a few big-game hunting camps and you’ll probably find some riflemen loading up with jacketed lead bullets and others with all-copper or gilding-metal bullets. And if you point that out, they’ll be happy to argue over which one is better. In the latter part of the 19th Century, we transitioned from lead bullets to jacketed bullets because jacketed bullets handled the higher velocities of the new guns and cartridges better. About a century later, mono-metal or all-copper/gilding-metal bullets hit the scene and have become very popular. The question is, which one is better for anchoring big game animals? So let’s set the record straight. Here are the pros and cons of each, and everything you need to know to make the right choice for your hunting.

Bullets—all bullets—kill by causing blood loss and ultimately depriving the brain of enough oxygen to function. This is accomplished by the destruction of internal tissues, vital organs, and the plumbing that cycles the blood through the circulatory system. Generally speaking, the more vital tissues damaged, the sooner blood flow will be inhibited, and the sooner an animal will fall down and stay down. Both jacketed-lead and all-copper bullets are designed to the job described above, but in slightly different ways. Here’s a break down.

With a common jacketed bullet like the Remington Core-Lokt, as it advances through an animal it changes shape, and it continues to do so as long as the velocity remains high enough to deform the thin gilding metal or copper jacket and soft lead core. The jacket and core also lose mass, and small- to moderate-size fragments radiate out from the bullet’s path causing additional damage. In most cases, a jacketed bullet will shed as much as 70 percent of its kinetic energy within the first 6 inches of penetration. Bonded bullets, like the Nosler AccuBond, have their core fused to a copper or gilding-metal jacket. They perform similarly to common jacketed bullets but do not shed as much material. Bonded bullets only lose about 60 percent of their kinetic energy in the first 6 inches of penetration.

Mono-metal bullets are made of all cooper or all gilding metal. Gilding metal is a copper alloy containing about 5 percent zinc. It has a Brinell hardness of about 114, whereas copper is rated at about 42. By comparison, pure lead has a Brinell hardness of about 5. Hollow points extruded into the nose of mono-metal bullets, like the Barnes Triple Shock, begin to deform on impact and reach maximum expansion within a few inches because as velocity rapidly drops with penetration resistance, it falls below the threshold capable of altering the shape of the hard bullet. Mono-metal bullets tend to dump only about 50 percent of their energy during the first 6 inches of penetration.

Energy loss is a good indicator of tissue-damaging potential. This was perfectly demonstrated on a whitetail cull hunt I went on in Texas some years back. Of the two dozen deer we shot with mono-metal bullets on the first day, most every one hit—correctly—ran in excess of 50 yards. We switched to jacketed bullets for days two and three, and only a handful of deer ran further than 50 yards. The difference was that the jacketed bullets damaged more tissue, created more blood loss, and deprived the brain of oxygen sooner. On the other hand, exit wounds were more common with the mono-metal bullets, and this made the necessary blood trailing easier. Which bring us to the other important factor when it comes to reliable kills on big game.

Massive tissue damage is only one piece of the puzzle. Mono-metal bullets can penetrate 15 percent deeper than bonded bullets and as much as 30 percent deeper than conventional jacketed bullets. And for some big-game hunting, deeper penetration is vital. Not so much for deer-size game, but when it comes to a raking shot on elk or moose, it becomes most important. Given sufficient penetration, a jacketed bullet will likely put a big game animal down sooner, but it will not make it any deader. Conversely, with insufficient penetration, the last look you may get at your trophy elk might be as it crosses the ridge line.

When hunting big-game animals with standard .30-caliber cartridges, jacketed bullets tend to work just fine. Bonded and mono-metal bullets do too. With smaller-caliber cartridges and lighter bullet weights, bonded or mono-metal bullets are a good choice because of the added penetration they deliver. They’re also a good idea when using high velocity cartridges because the harder bullets stand up better to high-velocity impact with bone.

Some dump energy faster and create larger wound cavities. Others, retain their energy, damage less tissue, but drive deeper. The key is to match the bullet to your cartridge and animal. Don’t believe the common myth that mono-metal bullets damage less meat but kill better; the more meat/tissue your bullet damages, the sooner your hunt will be over. Also, don’t believe that mono-metal bullets can be too hard to expand on smallish, big game. Mono-metal bullets begin deformation on impact and fully deform within only a couple inches, whether the target is a 100-pound whitetail or a 1,000-pound moose.