On the opening day of Minnesota's youth deer season, Zern Lyon, with help from his dad, took a giant buck locals knew as "Musafa." Here's the full story 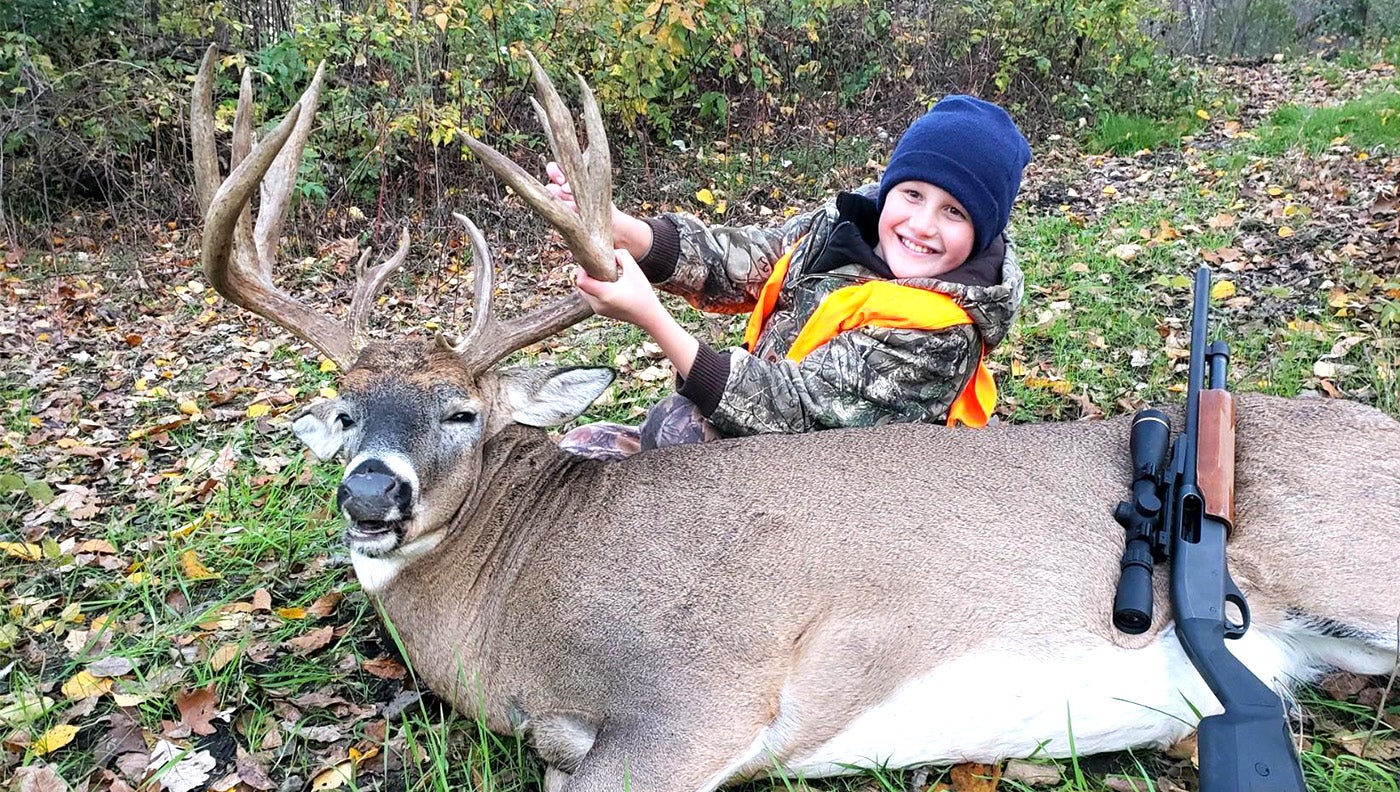 Minnesotan Chris Lyon was well aware that a monster buck known as “Mufasa” roamed his neighborhood. He also felt that his chances of killing the giant were scant. But thanks to some surprise trail-cam pics, that all changed a few days before the Gopher State’s youth deer hunt. Not long anger that season opened, Lyon’s son, Zerl, was wrapping a tag on a buck that had become a local legend.

“We own a property on the south end of a lake near our home,” Chris Lyon tells F&S. “We knew about the buck locals called Mufasa, but he didn’t seem to use our property much. About once a year, he’d come through our area; my grandpa and uncle would run cameras and get a few pics of him, but mainly at night. So when I got a single picture of the buck during the first week of October this year, I thought, Well that’s his one trip for the fall. But when I checked my camera again the week of the youth deer season, he was there two days in a row. The pics were at 6:46 a.m., but he was on our property, so at least we had a chance.”

Deciding where to take his 10-year-old son, Zerl, on opening day of the youth hunt was a bit of a head scratcher for Lyon. “On one hand, we had a blink overlooking a really nice food plot, not far from where the camera had gotten the pitcures of Mufasa,” he says. “On the other hand, we’d only killed two deer from that stand in 25 years of hunting. In the end, though, I decided if we had a shot at Mufasa, that was our best chance.”

The father-and-son team entered the blind in the afternoon, and Chris spotted a deer emerging from the nearby swamp and heading toward the food plot. “The buck was basically trotting right toward us, and I recognized him immediately,” he says. “While Zerl had been practicing all summer and I was confident in his shooting, I really wanted the deer to stop. So I tried to stop him at 30 yards, but the buck just kept coming. Finally Zerl just took the shot, and I could tell the buck was hit hard.” The giant deer turned to leave, and Zerl reloaded and shot again. When the buck reached the woods edge, he stopped again, and Zerl took another shot. “His summer practicing really paid off,” says Chris. “He hit that buck with all three shots!”

Chris Lyon picked up his binocular, found the buck in the thick cover, and realized the giant deer was down. “I turned to Zerl and said ‘You just shot a really big buck.’ And he said ‘How big?’ I told him ‘It’s Mufasa, the really big one everyone around here is talking about.’ Then we got down and walked to the deer.”

If Zerl didn’t appreciate Mufasa’s size from stories and trail-cam pics, he certainly did when he walked up to the deer. “I kinda felt like I was going to faint a bit when I first saw him up close,” Zerl says. “I mean, I couldn’t even fit my hands around his antlers at the base!” Zerl was not exaggerating; the buck measured more than 6 inches at the bases and carried that mass throughout, with his third circumference measurement over 7 inches. The main-frame 10-point had plenty of extra stickers and kickers, in addition to main beams that measured 24-4/8 and 25-2/8 inches, resulting in a gross green B&C score of 197-4/8.

Getting Mufasa out of the woods was no easy task. In addition to a massive rack, the buck was incredibly big-bodied, dressing out at 245 pounds. “I was making only 3- to 4-foot pulls just to get him out of the woods,” Chris says. “By the time we got him home, I’d texted some of the neighbors to let them know we had one to look at. We encourage our kids to take whatever deer they want, but the adult hunters try to let younger bucks walk. So I guess that’s paying off. Mufasa had been in the general neighborhood for three years that we know of. It was pretty amazing that he wound up on our property and stuck around for a few days, so that Zerl could get a buck of a lifetime.”