The 9 Coolest Songbirds to See During Turkey Season

Sure, a gobbler is the No. 1 bird you want to see in spring. But these prized songbirds should round out your top 10 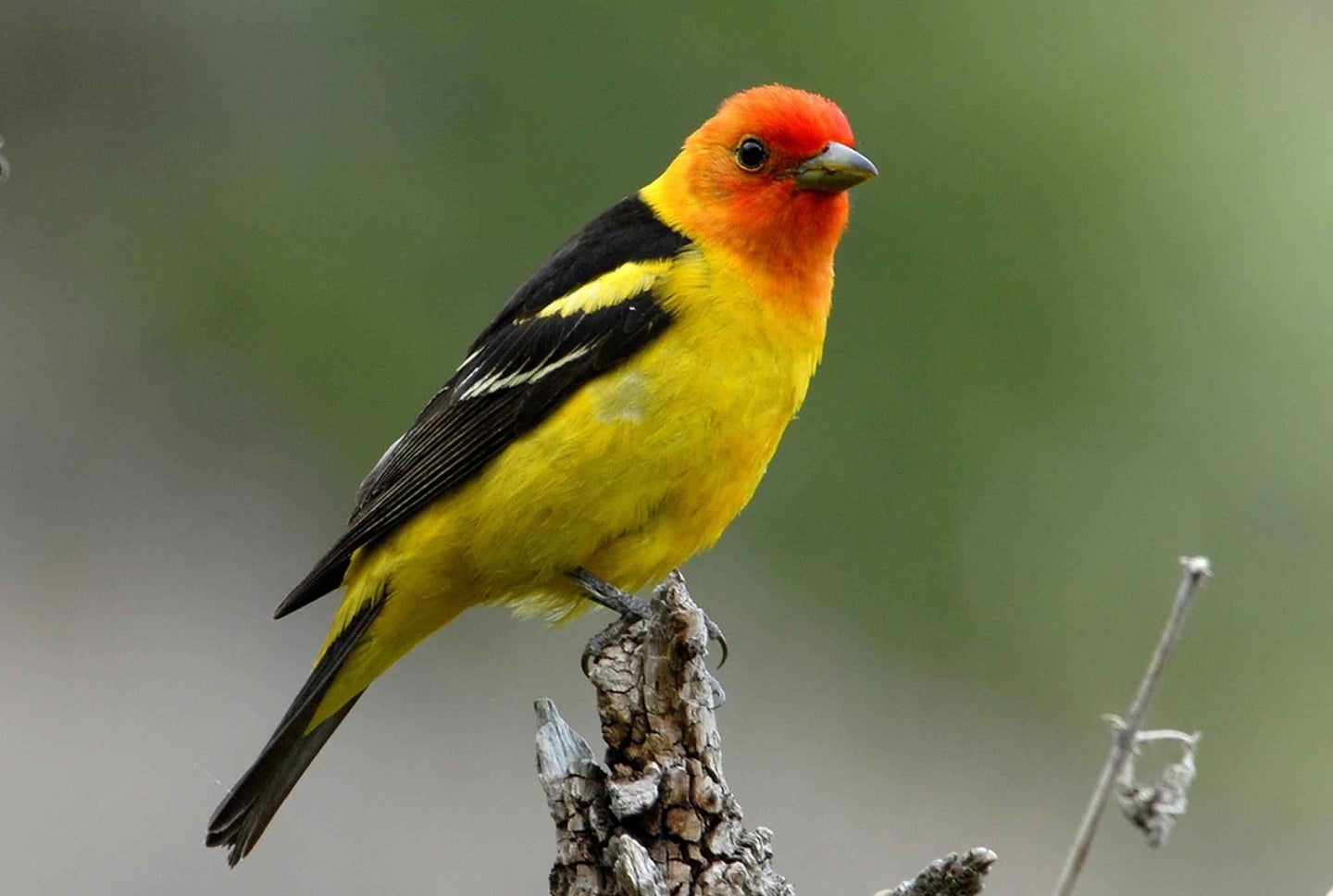 A western tanager perched on a branch. PublicDomainImages from Pixabay
SHARE

Whether you are a turkey hunter or not, if you’re into birding, you know that what starts out as a simple desire to increase your personal knowledge of our avian friends quickly turns into a passive-aggressive war of the positive IDs. Sure, seeing new birds is gratifying, but not nearly as gratifying as winning. “Oh, you saw your first indigo bunting yesterday? That’s so cool. Here, let me show you the four positive IDs of those I have in my journal, so you’ll have something to shoot for.”

It’s a little like professional wrestling for nature lovers, and spring is the ultimate cage match, with many of the most prized birds becoming increasingly conspicuous as they migrate north and begin breeding. If you are a turkey hunter, well, you’re already outdoors, quite possibly with a binocular strapped around your neck. So, keep an eye out.

Here is a list of spring birds to look for now that will give you a leg up on the competition. If, for example, a fellow birder comes at you with an American restart, you can respond with an atomic elbow drop in the form of a piping plover or scarlet tanager. Then break a chair over his head. Incidentally, the birds described here are all breeding males. Generally, those birds are the most colorful, since they have to attract females. When you get down to it, birds are pretty competitive, too.

The Baltimore oriole and its close western cousin, Bullock’s oriole, are so similar in appearance and behavior that they were until recently thought to be the same species. They are common in open deciduous woods or sheltered tall trees. Note the bright orange color, white wing bars, mostly orange tail, and slender, bluish bill. Every April and May, males fly north from wintering grounds in Mexico and the Caribbean and assert their dominance in small areas until the females show up. The Baltimore Orioles baseball team gets its name and gaudy uniform color from the bird. But the Baltimore oriole itself derives its name from the heraldic colors of Lord Baltimore, patron of the Maryland colony. The Baltimore oriole’s nest is one of the most intricate and unusual of any bird. Unlike most, it is built primarily by females and has the appearance of a long hanging basket, usually suspended from a tree limb 25 to 30 feet high. The nests are so sturdy that later-arriving spring migrants use them months later.

How to Attract Baltimore Orioles

The best way to attract orioles to your feeding area is to put out sliced oranges and grape jelly in an place where they’ll will be easily seen by the birds.

The male indigo bunting is a striking bright blue in its breeding plumage, from April to September. Its song seems to say everything twice, perhaps for fear of being misunderstood: ti ti whee whee zerre zerre. Indigo buntings aren’t blue; they’re actually black. It’s the diffraction of light through their feathers that makes them look blue, which accounts for the fact that adults may also appear in turquoise and black shades. The bird is often found on brushy slopes, old pastures grown to scrub, and woodland clearings. It is more common now than when the pilgrims landed because we have created so many woodland edges, like those along roads and power lines. Buntings migrate at night and are thought to use the pattern of stars near Polaris to guide them. In captivity, buntings deprived of a view of the stars become disoriented during spring and fall migration. A group of buntings is known as a “decoration,” a “mural,” or a “sacrifice” of buntings.

How to Attract Indigo Buntings

The best ways to draw indigo buntings into your yard is with a feeder packed with small seeds or sunflower hearts. Sprinkling mealworms nearby helps, and if you happen to have berry bushes nearby, so much the better.

Tanagers, in general, are medium-sized birds with distinctive stout pointed bills. Typically solitary, they tend to stay within the foliage of trees, where they feed on insects and fruit. The scarlet tanager is unmistakable with it’s brilliant red body and black wings and tail. Its song is a rapid series of phrases that sound like chik-brrr, and is often likened to “a robin with a sore throat.” They get noisy and fly around most birds that prey on them, such as blue jays and Eastern screech owls. On the other hand, they’re not excited about merlins and crows, which will also eat them. Go figure. A group of the birds is known as a “season” of tanagers.

How to Attract Scarlett Tanagers

Here’s a bonus: If you’ve put out sliced oranges and grape jelly for Baltimore orioles already, you don’t need to do a thing, as scarlet tanagers are also attracted to these foods. Suet works, too.

The plover doesn’t wow you. It’s a small, pale, sand-colored bird with somewhat showy blank bands on its head and neck. Its short bill has a bright orange base and a black tip. Nor is it a songbird. But it makes the list simply because it’s quite rare, and a positive ID of one is something you can taunt other birders with. Plovers are shore birds, and you usually need to visit a beach to see them. In a mixed group of plovers—there are a bunch of different kids, but they all sorta look the same—the piping plovers will be higher up the beach because they eat fly larvae and beetles, among other things. In flight, their song is peep peep-lo. The cool thing about plovers is that they’ll sometimes extend one foot out into wet sand and wiggle it to scare up prey, a technique known as “foot-trembling.” Adults will often feign a broken wing to lead predators away from their chicks. A group of plovers may be known as a “congregation,” a “ponderance,” or, my favorite, a “deceit.”

How to Attract Piping Plovers

Unless you live on the shore, you’re not likely to see piping plovers in your backyard. So pack up the beach umbrellas and head out. This won’t attract any plovers, but you’ll have a much better chance of seeing one.

Warblers are a large family of small, active birds with short, pointed bills. Many are brilliantly colored in yellow, green, and blue with boldly contrasting patterns. All feed on small insects, as well as some berries and nectar. A warbler’s song is a  “ta-whit ta-whit tee-yo,” which I have thought about adopting as a salutation at garden parties. The hooded warbler is especially cool because it looks like a bright-yellow mugger wearing a black ski mask. Very few muggers are only 5 inches tall, but if this bird were scaled up, it would be scary. Hooded warblers are very territorial, and they can be seen quickly fanning and closing their tails, exposing the white outer feathers. You may have to look closely, though, as they tend to stay hidden in thick undergrowth in moist forests or wooded swamps.

How to Attract Hooded Warblers

These warblers are mainly insect hunters, but they will also eat seeds and berries. Suet mixed with either is a good bet, especially if you place the treat close to or in some underbrush to draw the shy birds.

The adult male blue grosbeak is about 6¾ inches long and is all blue except for rufous wing bars and a dark tail. It’s not a common bird, but is sometimes seen in open weedy fields with hedgerows or brushy patches, usually in groups of 2 to 5 birds. I have no idea what happens if 6 or more show up, but I’ll bet it’s not pretty. Its song is a metallic “pink,” and it also trills a “cheep” as an alarm call. Blue grosbeaks prefer brushy, moist pastures and roadside thickets. The bird’s appearance is similar to the indigo bunting’s, but it is bigger. Grosbeaks sometimes use snakeskin as a nesting material, which is thought to deter predators. They feed on insects and seeds. The birds summer in the lower half of the U.S., from New Jersey to Kansas to California. A group of grosbeaks is collectively known as—you guessed it—a “gross.”

How to Attract Blue Grosbeaks

A blue grosbeak is a rare sight at the backyard feeder, but you can improve your chances by offering sunflower seeds, cracked corn, and millet—and by placing the feeder close to scrubby growth.

Breeding adult western tanagers have red heads, yellow chests and rumps, and dark wings and tails. They are found in the western U.S. from Alaska to Baja and as far east as Wyoming and west Texas. First discovered by Lewis and Clark, the bird breeds farther north than any other member of its chiefly tropical family. Its scarlet head comes from a rare pigment called rhodoxanthin, but the bird does not produce this substance itself; instead, it comes from its diet of insects, which pick up the pigment from plants. The western tanager’s call is a series of rising and falling phrases, as well as a call that sounds like “pit-er-ick.” They prefer coniferous or mixed woods. A bunch of western tanagers is called a “season.”

How to Attract Western Tanagers

Like scarlet tanagers, these birds may come to feed on sliced oranges or suet. If you’re lucky.

Glossy orange with black on its sides, wings, and tail, the adult male American Redstart looks a bit like a Baltimore oriole. These birds are common in deciduous forests, particularly in wet areas and second-growth woodlands. The small, long-tailed warbler often fans and raises its tail to flush insects, which it then chases and eats. Redstarts must get bored easily because they sing variations on their calls. One is tsee tsee tsee tsee tzirr. Another is tseeta, tseeta, tseeta, tseet. Yet another is tseeo tseeo tseeo tseeo. A group of these warblers is called a “bouquet,” a “confusion,” or, my favorite, a “wrench.” The American redstart is known as the “butterfly of the bird world” because of its quick, fluttering motions and bright orange coloring. As endearing as that is, you should know that redstarts are also known as “the latrine bird” because they like to look for flies near outhouses.

How to Attract American Redstarts

Some folks will go to the trouble of planting serviceberry or barberry in their yards to attract redstarts, but the much-easier route is to put out suet cakes mixed with insects or berries.

Our smallest but possibly coolest bird, hummingbirds average just 3½ inches long yet are capable of 50 to 80 wingbeats per second. Most live in the tropics, with 17 species regularly visiting the U.S., mostly near the Mexican border. The good news: One or more breeding species can be found in just about every state. Only the ruby-throated hummingbird is found east of the Mississippi, and the black-chinned hummingbird is found throughout much of the west, to name a couple. Fun facts:  All hummingbirds have iridescent upper parts. They’re also the only birds that can fly backwards. Hummingbird eggs are about the size of peas. The black-chinned hummingbird may consume three times its weight in nectar every day. A group of hummingbirds is often called a “shimmer,” “hover,” or a “glittering.” They’re pugnacious little critters and can often be seen dive-bombing one another when there is competition for nectar.

How to Attract Hummingbirds

The best way to see hummingbirds is with a backyard feeder designed specifically for these birds and dispenses sugar water (a cup of sugar to 4 cups of water).