If both sides of Kyle Chaney's lopsided slammer were even, the buck would have gone 230 inches or better. Here's the full hunt story 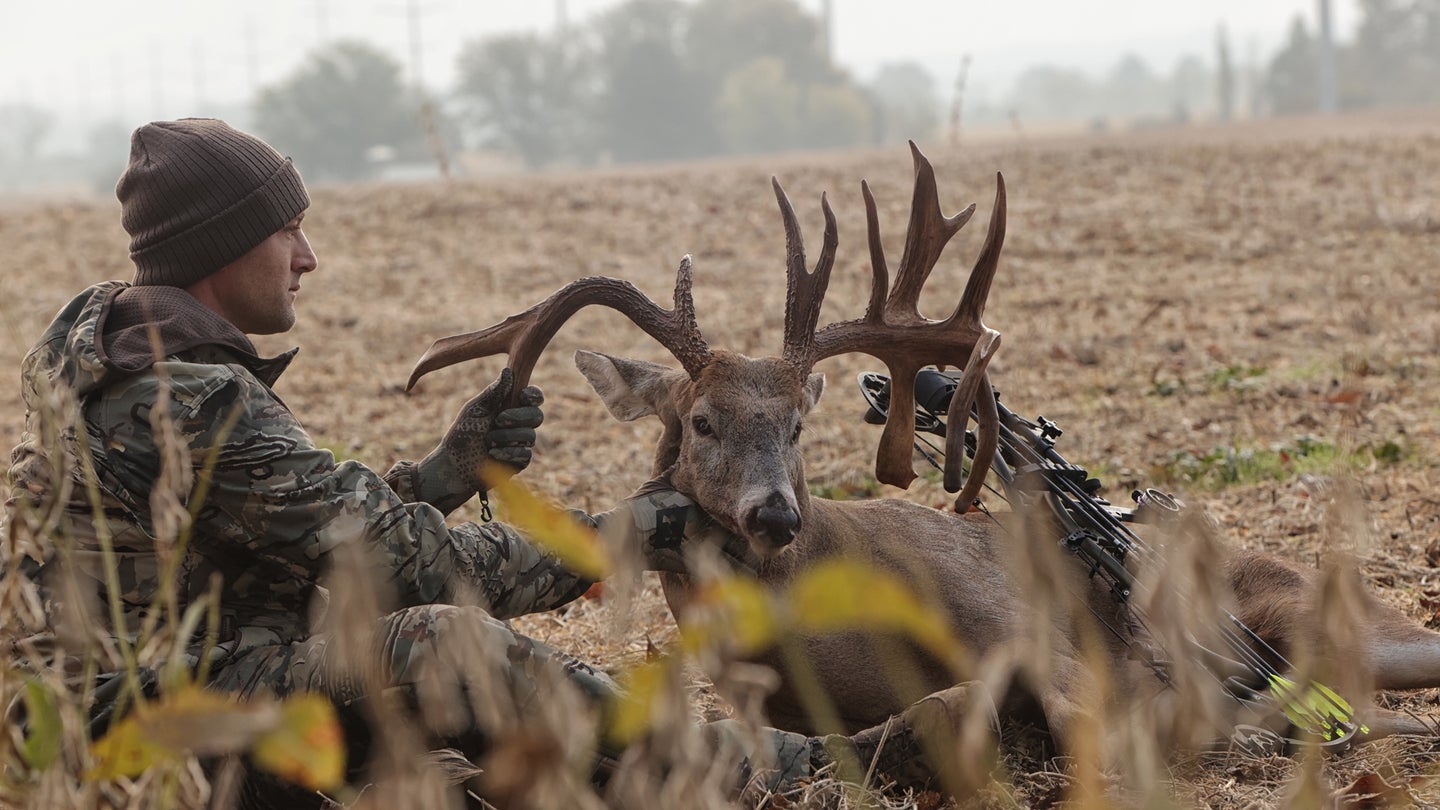 Chaney poses with his giant lopsided buck in the field. Kyle Chaney
SHARE

Kyle Chaney had six B&C bow kills on his wall going into the 2021 Ohio archery season. But Number Seven, a Buckeye State giant he killed this fall, might be the most impressive. Chaney’s mismatched monster, a buck that grew a funky right side thanks to an injury to its hip, grossed 189”, despite having only three points on that antler. Here’s the story of the hunt for that buck, a deer that Chaney came very close to not even chasing.

Trail cameras are incredible scouting tools, but they can sometimes fool you, as Chaney learned last summer. “I hunt several small farms in central Ohio, and typically I find one good buck on one of them and hunt just that deer,” he says. “This summer I was really struggling to find a decent buck, and even when my buddy Chris, who comes down here from PA to hunt with me every year, got a pic of this buck, I wasn’t too excited. We were only getting side views, which didn’t look very impressive, and the buck looked slim and young. Then we got a shot of him facing the camera. Things changed in a hurry!”

On opening weekend, Chaney decided to hunt the buck from an observation stand. “The buck had been feeding in a bean field all summer and I set up where I could see the area he’d been coming out most frequently,” he says. “About 5:30 I saw him limp out into the beans at about 80 yards. I could tell his left hip was really hurting him and probably broken, which I assumed was from getting hit by a vehicle and would explain the right side of his rack being so messed up.” While Chaney is accurate at 80 yards and beyond with his bow, he elected to pass the shot and watched as the buck fed off the field.

The next evening presented a south-southeast wind, which is unusual for that area. “I was going to set up a little closer to where the buck—which we’d nicknamed Ed—was coming out, but I couldn’t find a good tree,” Chaney says. “I hang-and-hunt almost every time; I rarely sit a pre-set stand. And I don’t often sit on the ground, but this time it felt like a legitimate method. I’d found a big tree that had blown down into the field, so I backed into that and waited. I had been sitting there quite a while before I heard a twig break behind me. I turned my head slowly, and Ed was standing there, ten feet away. He got me, and trotted back in the woods for 20 yards, then slowed to a walk. When I was sure he had moved off, I got up and snuck out of there.”

Then a game of cat-and-mouse ensued. “The next night I went back to the original stand, prepared to shoot if he came out in the same spot,” Chaney says. “This time he came out 250 yards away, and all I could do was film him. I could see the beans were starting to turn yellow, and I thought the deer would lose interest in them. The next night, I went to another observation spot and got skunked, and I worried I’d blown my opportunity. The following evening I was in another spot that allowed me to see even further; that sit I saw every other deer I’d been seeing, except Ed. They were feeding in a small section of the beans that was still green. I figured he had to be eating there too, I just missed him that night.”

Working with this new information, Chaney decided to move into the timber and look for an ambush. “I snuck into the woods and spent a long time studying a creek crossing,” he says. “It was a shallower crossing and, because I knew walking was difficult for the buck, I decided that he’d use it. When I searched for a good stand tree all I could find was a limbless tree with almost zero cover. I hung my stand about 30 feet up and prayed I wouldn’t get busted. At about 6:30, a doe ran in, acting like something was chasing her. She looked straight up in my tree and locked on me. I couldn’t even move. I’d been trying so hard to film my hunts and here I was, unable to even make the move to turn the camera on.”

Chaney remained frozen, sure the hunt was going to unravel. Then a young buck walked in to save the day. “This was a buck I often saw hanging with Ed, so I was confident he was nearby. The smaller buck got right up by the doe and pretty soon I looked up to see Ed coming in. He stopped at 50 yards, staring at the smaller buck and doe, and when he started coming toward them I saw a big tree he’d go behind on the way. When his head disappeared behind that tree, I drew, and Ed walked in to 15 feet, where I shot him.”

The buck made a short run before expiring, and Chaney had his seventh Booner. In addition to a unique and incredible rack—the buck grossed 189 inches, and had three huge drop tines on its left side—Ed’s antlers looked eerily familiar when Chaney handled them. “I’d found a matched set of 8-point sheds two years earlier that were from a 160-class buck. While that deer disappeared that fall, I heard there was a guy hunting a 180-class buck not far from me. I’m convinced those sheds, and that buck, were Ed. If he hadn’t been injured in that hip, he’d have been a 200-inch deer this year. But as it is, he’s a pretty amazing trophy.”

Chaney is quick to point out that wireless cameras helped him get this buck. “We had enough pics of him that I was confident I knew the spot—not the area—that he was bedding. And I proved it by walking back in there after the kill. He was slipping into a small opening in super thick cover, and tucking up against a downed log to bed. He was super faithful to that spot, and I’m convinced he remained that way because once we hung that wireless camera, we didn’t have to keep going back in there to pull cards. Had we done that, we’d have probably spooked him. When you know exactly where a buck is bedding, it gets a whole lot easier to kill him.”