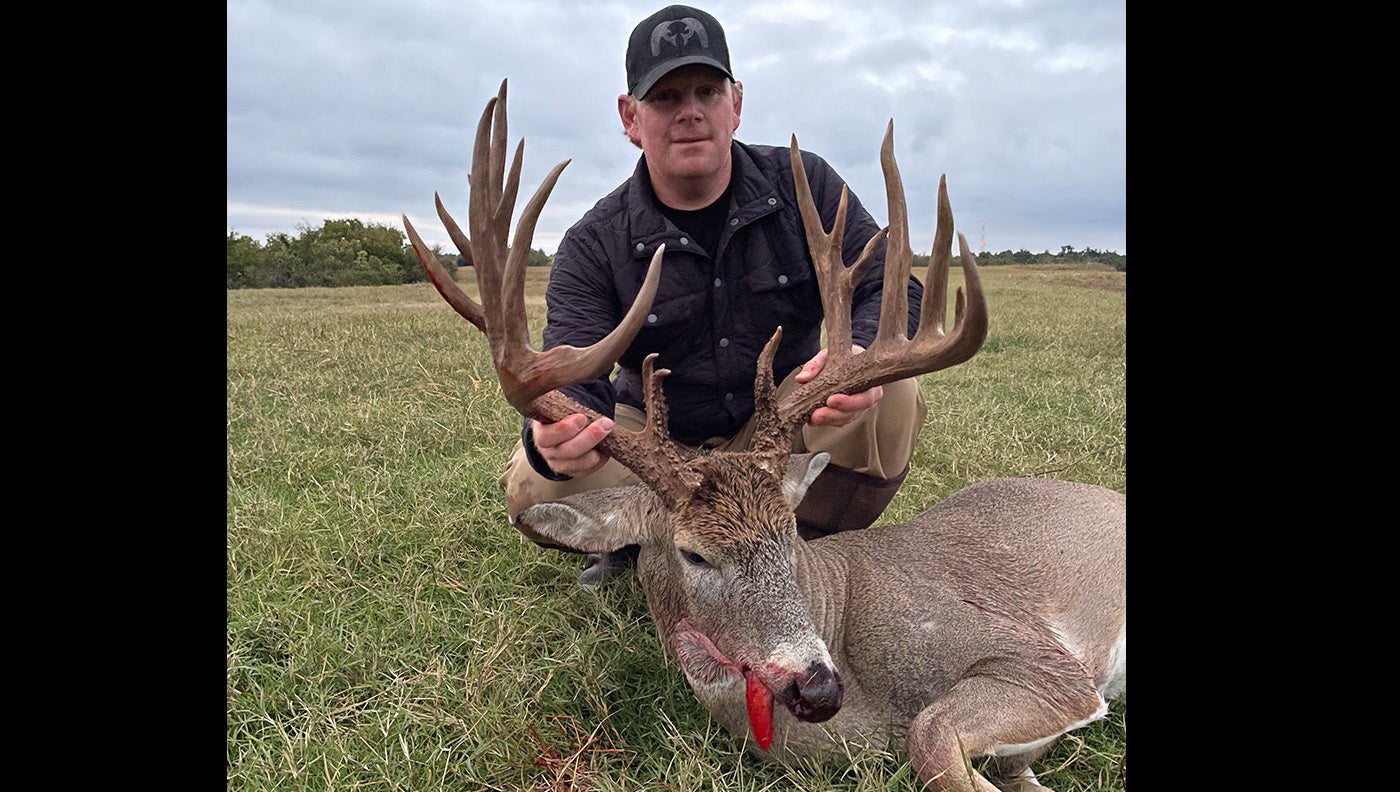 Oklahoma bowhunter Zach Meadows knew that the afternoon of November 3 had all the makings to be a great hunt, but he didn’t expect it to be a record-breaking one. A trail camera check the day before had revealed not one but two giant bucks—a big non-typical and a truly giant typical—on his family’s property.

“My boys and I had gotten pictures of the giant typical throughout the summer,” Meadows tells F&S. “I even saw him once when I was planting a food plot in August of last year. Our concern was that he wasn’t always consistent in when and where he was showing up. A landowner a couple of miles away had some pictures of him as well, so we knew he traveled.”

When Meadows pulled the trail-cam photos the day before the hunt, he was surprised that the giant typical had shown up both in the morning and evening. With the pre-rut underway, tons of scrapes opening up, and similar weather conditions as the day prior, Meadows thought he could stack the odds in his favor to catch the buck in daylight.

“Choosing where to hunt him was a little tricky since his movement had been sporadic,” says Meadows. “I decided on a very secluded staging area with a small food plot. The deer used it a lot, and the pressure was very low. I got in early, and deer started filtering through almost right away. It was ideal pre-rut activity. There was a lot of chasing by young bucks and sparring. I knew it was going to be a great night.”

Little did Meadows know he would have to make one of the most difficult decisions in his hunting career that evening.

To Shoot Or Not To Shoot

“When the big non-typical we had pictures of came out early and worked a couple of scrapes right next to me, I had a hard decision to make,” says Meadows. “He worked his way to 20 yards. This deer is easily a booner, probably upper 180s, and would have been my largest buck by far. One of the great things about Oklahoma is that we get two buck tags as residents. I had already filled my first tag during the early muzzleloader season, so I had to decide whether to shoot the non-typical or pass on him, hoping the even bigger typical would show.

“I finally decided to pass on the non-typical right as his body posture completely changed, and he turned toward the cover, looking hard,” says Meadows. “Then a giant framed rack emerged, walking right for the non-typical. As they postured up, I thought I was about to see an incredible fight, but the non-typical walked off, giving ground to the giant typical.”

Meadows, who operates a petroleum company in Edmond, says years spent guiding grizzly hunts in Alaska prepared him well to manage buck fever. But the size of this Sooner state giant was his hardest test yet. “He finally turned and offered a great broadside shot at the edge of my effective range,” says Meadows. “I usually do a pretty good job managing my emotions, but these last few moments before squeezing off the shot, my heart was pounding in my ears, and I was barely hanging on with all the adrenaline. I was finally able to breathe and settle in. As the shot broke, it looked like the arrow hit its mark right in the crease behind the buck’s front shoulder.”

The buck disappeared into the brush shortly after the shot. After gathering his thoughts and giving the buck a few minutes, Meadows took up the blood trail. After only about 30 yards, he saw the giant rack sticking up in the brush.

The Buck Was Even Bigger Than Meadows First Thought

“I couldn’t believe the frame and mass,” says Meadows. “The trail camera pictures didn’t come close to doing him justice. It was way bigger than I originally thought. Everything happened fast after finding the buck. I FaceTimed my oldest son and celebrated with him right where I found the buck. That was really special. It’s been so fun watching his passion for hunting continue to grow each season. The next morning we snapped a few photos with the deer and then quickly got him to the meat processor for caping and to take care of the meat.”

Read Next: 208-Inch Indiana Behemoth Could Be New No. 2 Typical Whitetail of All Time

Once at the processor, they roughed scored the deer at 199 inches. Meadows was sure it must have been a mistake since none of them were very experienced scorers. More experienced scorers came up with an green gross score of a whopping 210 inches a couple of days later. Meadows didn’t share green net score on the buck with F&S, and the rack must still withstand the mandatory 60-day drying period before being panel scored. Still, after deductions, the buck could threaten the current state record for a typical buck killed with any kind of weapon, a 194-inch buck killed in 2007 by a gun hunter. However, Meadows’s buck probably has a better chance at topping the state record archery record, a 188 5/8-inch buck that was taken in 2019.

“It’s definitely got a chance [at a state record],” Terry Mayberry, owner of Terry’s Taxidermy, told The Oklahoman. “He’s got quite a few deductions on him. Until they get an official score, it’s hard to say. He’s got all those kickers on him that are deducts, but he’s definitely got the mass and got the circumference.”

Regardless of the potential state records, Meadows’s Sooner State monster is a buck of a lifetime—and Meadows couldn’t be more excited for what the future holds.

“Developing land and managing for bigger bucks has turned into a year-round passion for my entire family,” he says. “Growing up, I worked and traded labor for hunting rights and hunted where and when I could. Now, being able to plant food plots, run trail cameras, hunt with my four boys, and share this incredible buck with them brings a whole new meaning to this passion. Regardless of the score, there are going to be many more incredible memories to come for my family.”

For over a decade, writing, photographing and filming all things deer and deer habitat continues to be an ongoing education, passion and how Alex puts food on the table.