Garrett Wood had to wait almost the entire deer season to finally get his shot at the buck he wanted. But he was rewarded with world-class whitetail 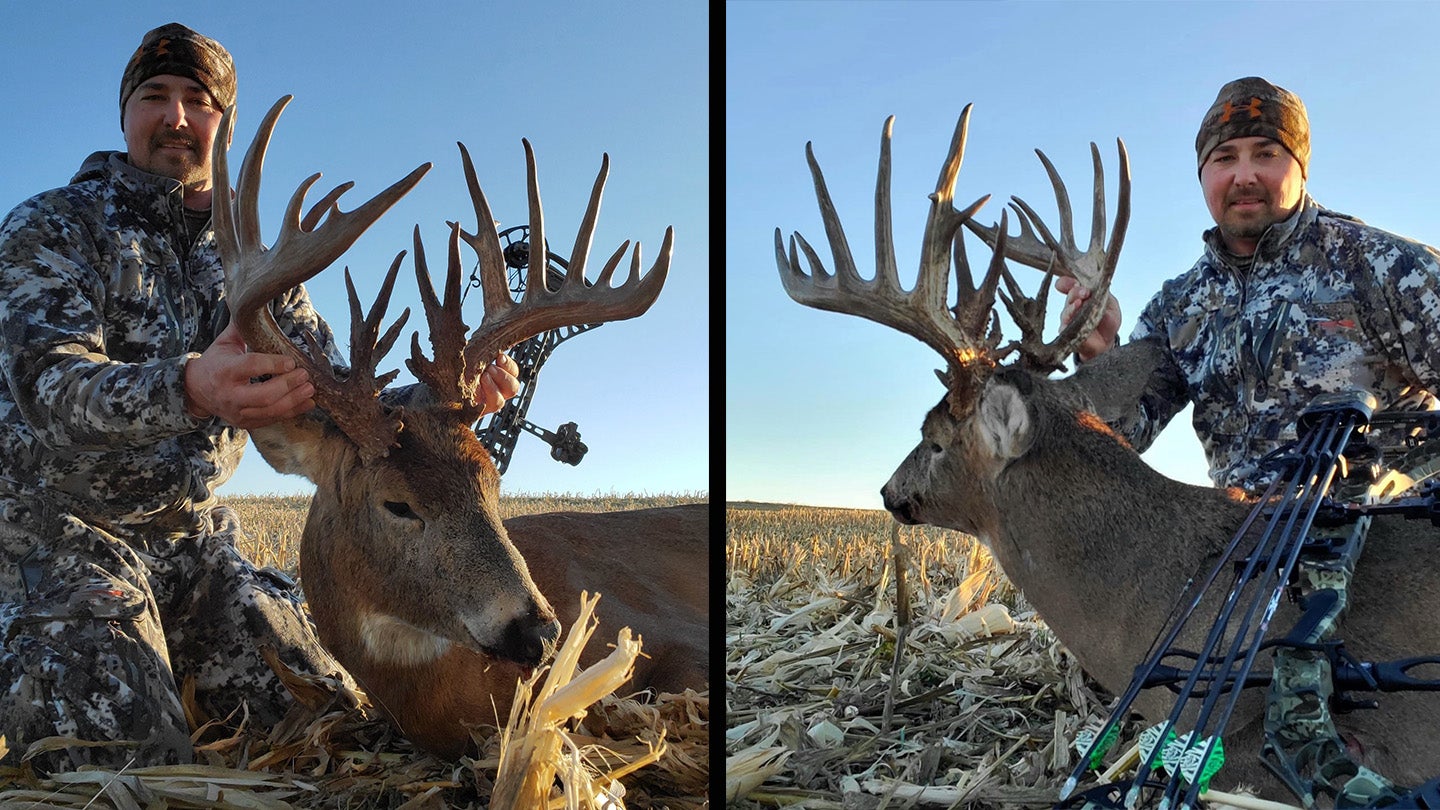 Missouri bowhunter Garrett Wood has killed some great deer on his family farm, but he’d never had a chance at a true monster whitetail there. That all changed on December 10th of this season, when he arrowed a 26-point Show-Me State giant that grossed 218-2/8 inches.

Wood started getting pics of the buck three years ago, though he had no idea then that the young deer with good potential would explode into a Goliath. “I got the first pics of this deer in August of 2019, and at the time I thought he might only be 2½ years old,” Wood tells F&S. “He had a pretty distinctive rack, with points that leaned inward and eye guards that were hard to miss. I remember thinking, Man, I hope that one makes it another year or two. I got a few random pics of him through the fall, and that was about it. ”

The deer disappeared for an entire season after that. “I had zero pics of him in 2020, but my neighbor had several. For some reason, the buck just didn’t show up on my farm, or at least not in front of my cameras, for a year. So when I started getting pics of him in August of 2021, I was honestly mystified. I remember thinking, Who is this deer and where did he come from? It took me a couple days to figure out that it was the same buck from 2019. He had grown into a giant!”

The Giant Buck Was a Vampire for Most of the Season

Wood had plenty of pics of the buck from August into October, but none during daylight. “I have learned to be patient with mature bucks,” he says. “He was staying fairly faithful to a couple areas on my farm, but I decided I was not going to even try for him until I got some daylight pics. It’s really tempting to push things and hunt a big mature deer like that and hope you get lucky, but it almost never works out. I knew this was a buck worth waiting for.” Finally, on October 17, Wood got a pic of the deer at 6:30 in the morning and started putting together a plan for hunting him during the rut. But then he disappeared again. “I got no pics of him for a solid month, and when I checked with my neighbor, he wasn’t getting any either. We decided that buck had just got in an area with a lot of does and didn’t need to move much.”

Despite the lack of rut activity, Wood was still hopeful for a chance at the monster. “We sow cover crops after we harvest our corn—rye, oats, and radishes—so I knew we’d have winter food,” he says. “I was hoping those food plots would be enough to bring him back.” On November 23rd, the day after rifle season closed, Wood’s neighbor sent him a picture with a nice buck in the background and asked Wood if it was the big one they’d been watching. “I looked close and realized it was him, but he was missing a G3. A few days later, I started getting pics of him on a camera near the property line; he was on my neighbor’s at 8:30 in the morning, walking right in front of one of his stands. So it was great to know he was back home and active. On December 9, my neighbor texted to tell me that the buck was back on my side with a doe. Suddenly I was back in business.”

A 48-Yard Bow Shot and a Short Tracking Job

Wood had a stand on the field the buck was using, but it required a northeast wind to hunt it. “The next day the wind was right, but it was supposed to switch to northwest about an hour before dusk,” he says. “I decided I could hunt the area, but only from the ground. My main concern was being able to get out of there at the end of the hunt without spooking deer.” He slipped into the area at about 2:45 and set up in some good cover on the ground where he could see the field. At 3:30, he looked up and spotted the big buck in the field, feeding with a doe.

They two deer fed toward another group of does and eventually bedded down in the cornfield. “Finally they all stood up, fed for a bit, and then started walking toward me,” Wood says. “The doe he was originally with walked in front of me and I ranged her at 48 yards, knowing the buck would be next. I set my single pin slider sight to the right distance, and when he stopped right behind her I shot.” The arrow placement looked good, and the buck acted like it was hit hard, but Wood decided to play it safe and wait until morning to track him.

It was a long night, but Wood’s wait was worth it. He found the giant Missouri buck not far from where he’d last seen him, and the whitetail was even better than the veteran bowhunter imagined. “He had 28 countable points and 26 that were scorable,” he says. “I noticed when I got my hands on him that he had what looked like a bullet hole near his G3, so I imagine he got shot at during rifle season. He’d also broken off his brows on one side. I think those broken points would have added 6 or 7 inches and would have pushed his gross score close to around 230.”

Despite the broken points, Wood knew he had one amazing buck. “We counted 42 inches worth of abnormal points and no mass measurements under 5-1/2 inches,” he says. “I was so happy to be able to even hunt a deer like this; I’ve killed some good bucks, but getting even close to that 200-inch mark has been tough. It took a lot of patience to stay off this buck and only hunt him when the time was right. But the wait was worth it!”