While being tracked by GPS collar, Buck #140 crossed a 1-mile-wide stretch of the Mississippi River four times 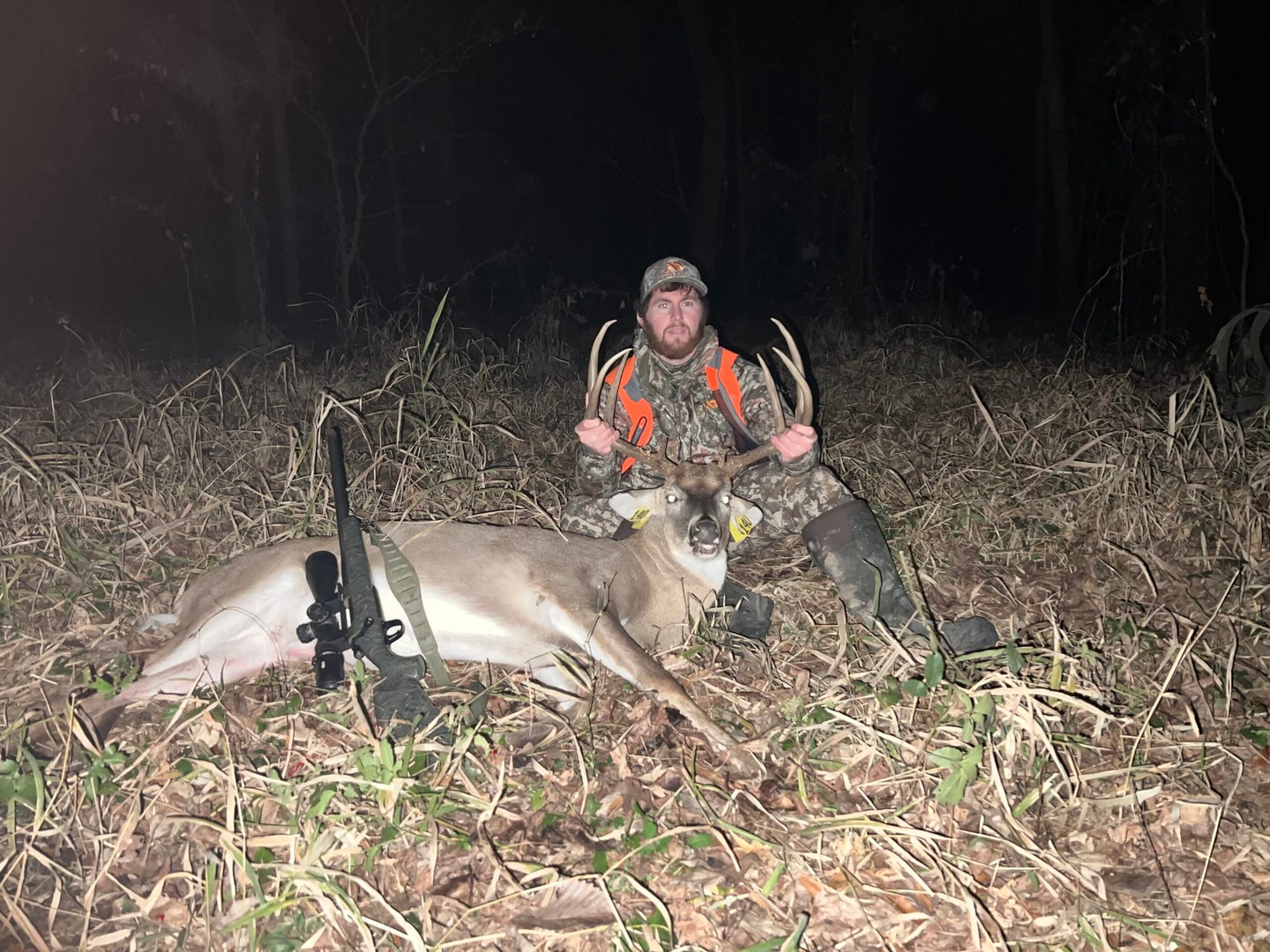 Martin was surprised when he found out he'd taken the famous buck. Trevor Martin
SHARE

For two years, a GPS-collared buck dubbed Buck #140 captured the attention of Mississippi deer researchers and hunters around the country. During the first year the deer was being tracked, he traveled 18 miles and swam across a roughly 1-mile stretch of the Mississippi River to get from Louisiana to the Magnolia State. The following year, he did it all over again. The buck lost his collar this fall, but three days ago, a hunter named Trevor Martin shot the deer on public land. Here’s how it all went down.

Buck #140 was captured, tagged, and fit with a GPS collar in 2020 for a Mississippi State University Deer Lab study on deer movement. The MSU Deer Lab was working alongside the Mississippi Department of Wildlife, Fisheries and Parks to look into deer movement. Immediately, the far-ranging buck stood out to researchers, and over the next two years, it swam across the Mississippi River four times traveling between wintering grounds in Mississippi to its summer range in Louisiana.

Buck #140’s collar was programmed to drop off this past November, and during hunting season this year, a hunter named Michael Langdon found it in the Ten Point Unit of Phil Bryant Wildlife Management Area. Langdon contacted a graduate research assistant name Luke Resop at the MSU Deer Lab who said the collar belonged to “the most famous GPS-collared whitetail deer in North America.”

Langdon never ended up seeing the buck. And nobody else did either, until this December when Trevor Martin and his friend Aaron Graham traveled to the Ten Point Unit. “We live in Hurley and just don’t have the kind of deer that live in the Delta,” Martin says. “We put in for every draw hunt that we could for bow or rifle this year, and we hit on Phil Bryant.”

Martin and Graham didn’t really know about Buck #140 until they started driving to the Delta. On the way to the Ten Point Unit, the two friends read about the legendary deer, but they didn’t think they’d actually see it, let alone get a shot at it. Martin just wanted to shoot a legal buck—which needs to have either a 16-inch inside spread or 20-inch main beam—so he decided to hunt hard for the next three days.

On the morning of December 17, Martin put on his pack and set out to cover ground, still-hunting around the WMA. He walked about 5 miles looking for deer, but only saw a doe. By the time the afternoon rolled around, Martin was feeling tired. He had made his way back toward his vehicle and picked a spot to sit for the last hour of daylight between two clover and rye food plots. Shortly after getting settled, Martin started seeing deer.

“Three bucks came out on the food plot, but none of them were legal,” he says. “Then I looked around to my left and saw three does come out.”

Martin was checking out the does when another deer caught his eye behind them. “I said to myself, ‘oh, that’s a big-bodied deer,’” Martin says. “I got my binoculars up, and I saw that it had some good horns. But with it so far away, it was hard to tell if he was legal.”

The buck was standing at around 230 yards at the edge of a treeline and seemed like he wouldn’t be there for long. Martin looked at the deer through the maximum magnification on his rifle scope, and knew he only had a moment to field judge the buck and take the shot.

“When I saw him lift his head and could see that his horns were way outside of his ears, I said ‘it’s go time,’” Martin says. He steadied his rifle on his knees, pulled the trigger, and the buck ran into the woods. Then Martin called Graham and started looking for blood.

Martin and Graham Get a Big Surprise

By the time Graham got to the food plot, Martin had found a decent blood trail. It was getting dark, though, and the two friends followed the trail into the woods with their headlamps. They tracked the deer for 200 yards before finding him dead.

“Aaron was walking in front of me, and we couldn’t really see the whole deer when we walked up on him,” says Martin. “When I went to pick up his head, we both saw the tags, and I thought, oh god. Then we both just started freaking out. That was the last thing I was expecting. I didn’t notice the tags when I took the shot. I was only looking at the horns. My number one concern was to make sure I was looking at a legal buck.”

As soon as they realized Martin had just shot Buck #140 Graham and Martin started sending pictures to their friends, family, and hunters back at camp. By the time they returned to camp, a crowd had gathered in the driveway waiting to see the deer.

“We pulled up and they surrounded the truck,” Martin says. “Then this big guy named Scott [Garrard] offered to help. He grabbed that deer out of the truck like it was a rag doll and had it caped, cleaned, and deboned in no time. I can’t tell you how much I appreciated that. I was exhausted from walking all day, and by the time we got back to camp it was really nice to have the help.”

Buck #140 is the first buck Martin has ever shot in the Mississippi Delta, and the first buck he’s taken on public land. He took the deer to his taxidermist for CWD testing—per Mississippi regulations—where they aged the deer at around 5 ½ years old. Martin has also been in touch with researchers at MSU, and they sent him trail-camera pictures they had of the buck.

Read Next: How to Hunt Late Season Deer, According to Top Whitetail Guides

The Deer Lab has finished their study on Buck #140, but they encouraged hunters to shoot the deer if they saw him so they could gather more information. Buck #140 spent winters in a CWD management zone, and if the deer is found to test positive, researchers will have strong proof that whitetails can spread the disease over distance.