This heavy 5x5 shakes his whole body, then his head, and the matched set comes flying off his head 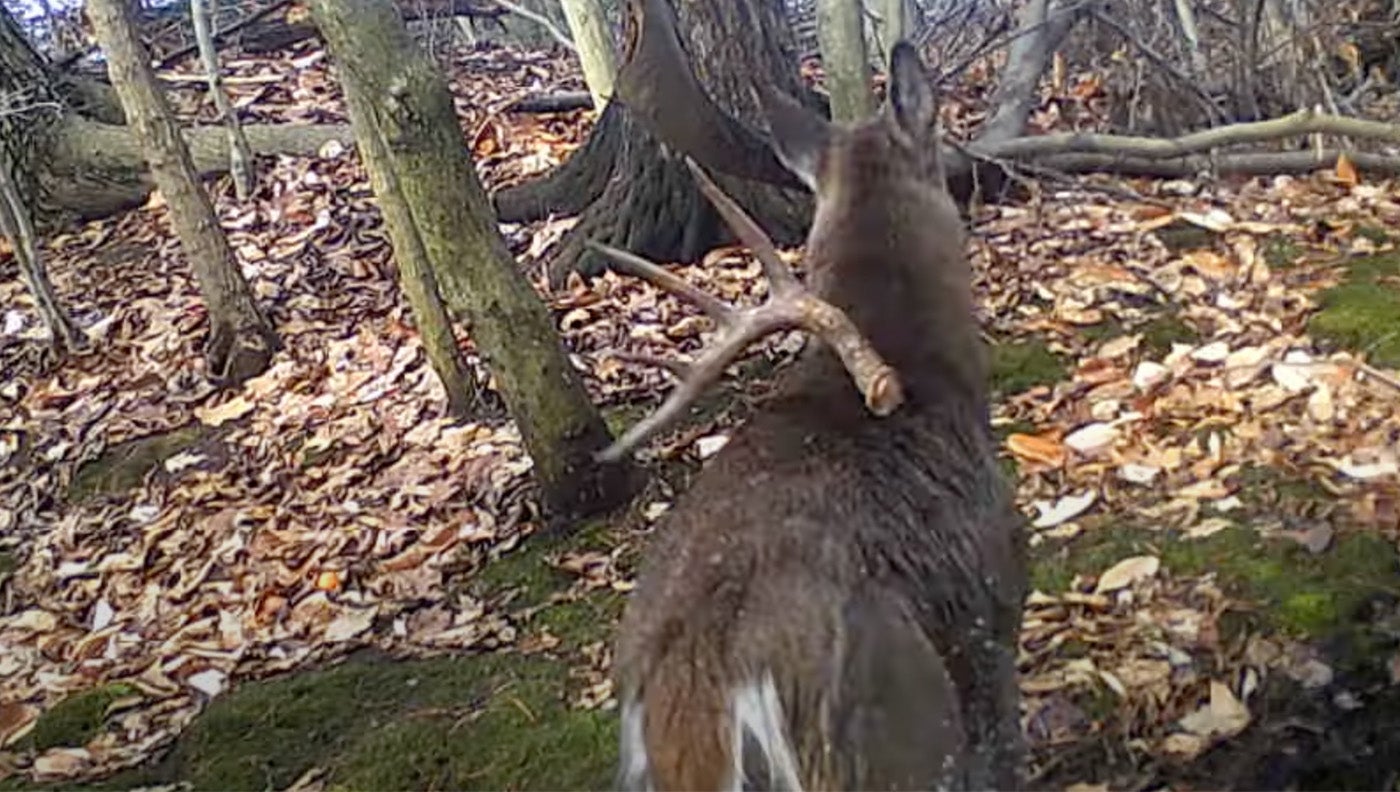 For a shed hunter, the only thing better than actually spotting a buck shedding his antlers is getting the event on trail-camera. One Tom O’Reilly posted the video below on Youtube last month, noting that it was captured on January 6 of this year and that the time stamp is incorrect. In any case, it’s making the rounds now, as we’re in the midst of shed hunting season. It’s such a great depiction of the event, where the buck, seemingly irritated by the presence of his antlers and ready to get that weight off his head, first does a whole-body shake and then a head-shake to achieve his goal. If there’s a bigger gimme in the shed hunting world, I haven’t seen it.

The incident, and others I’ve seen like it, suggest to me that a buck likely knows when he’s about to cast his antlers and, in some cases at least, their presence bothers him. I think this is especially true for big bucks whose antlers might carry some significant weight. If one side drops, the buck must feel a little off-balance and, wanting to feel right with the world again, tries to get the other side off too.

My friend Eric Bothun is an Iowa shed fanatic who’s teaching the finer points of the activity to his young son. Just this week the pair found a single side of a nice buck stuck in the strands of a barbed-wire fence. Now I’ve been around farm-country whitetails long enough to know that navigating barbed wire is a nearly thoughtless process for any deer not wearing spots. That antler didn’t get there by mistake. More likely, the buck wanted it gone and found a “tool” that could help make it happen.

Like so much in Nature, the annual antler drop is a dynamic activity, governed by no hard-and-fast rules. Just a couple years ago we had a great, heavy-antlered buck in my neighborhood. This buck ran the gauntlet of hunters—including me, my neighbors, and an untold number of public land guys—and survived. The hunt for his shed antlers was on the next spring, and my neighbor Dave scooped up one side in the woods behind his barn in March. But Dave’s diligent attempts to find the other side were fruitless, and his failure was explained a month later when another neighbor found the match on his farm—over a half-mile away. Who knows how long that buck ran around with only one heavy antler on his noggin. In any case, it explains why matched sets can be so tough to find.

On the other hand, I’ve heard people in the captive-deer industry say that many bucks cast their antlers like clockwork each year, sometimes with days of last year’s drop. So I was intrigued when the farmer who owns the Kansas property I hunt told me of a giant, old 8-point that hung around his farm house for much of the winter, then shed both sides in a nearby field the same week of March each year. The farmer, whose name is Bruce, had five sets of sheds from that buck–all found within 100 yards of the last pair–when one of his friends finally arrowed the deer. “He’d probably peaked in antler growth two years earlier, as a 6-year old, and might have scored 140 inches on a loose tape,” Bruce laughed. “My friend wasn’t that wowed with the rack, but to me that was the coolest buck on my farm.”

Bruce wasn’t running many trail cams back then, but I have little trouble imagining that old Kansas warrior standing in the same field each spring, feeling the itch, and then shaking his massive head back and forth until those heavy antlers dropped off to make room for the next pair.