Jake Mitchell thought someone stole his trail camera. Then he found it—wrapped in a buck's antlers 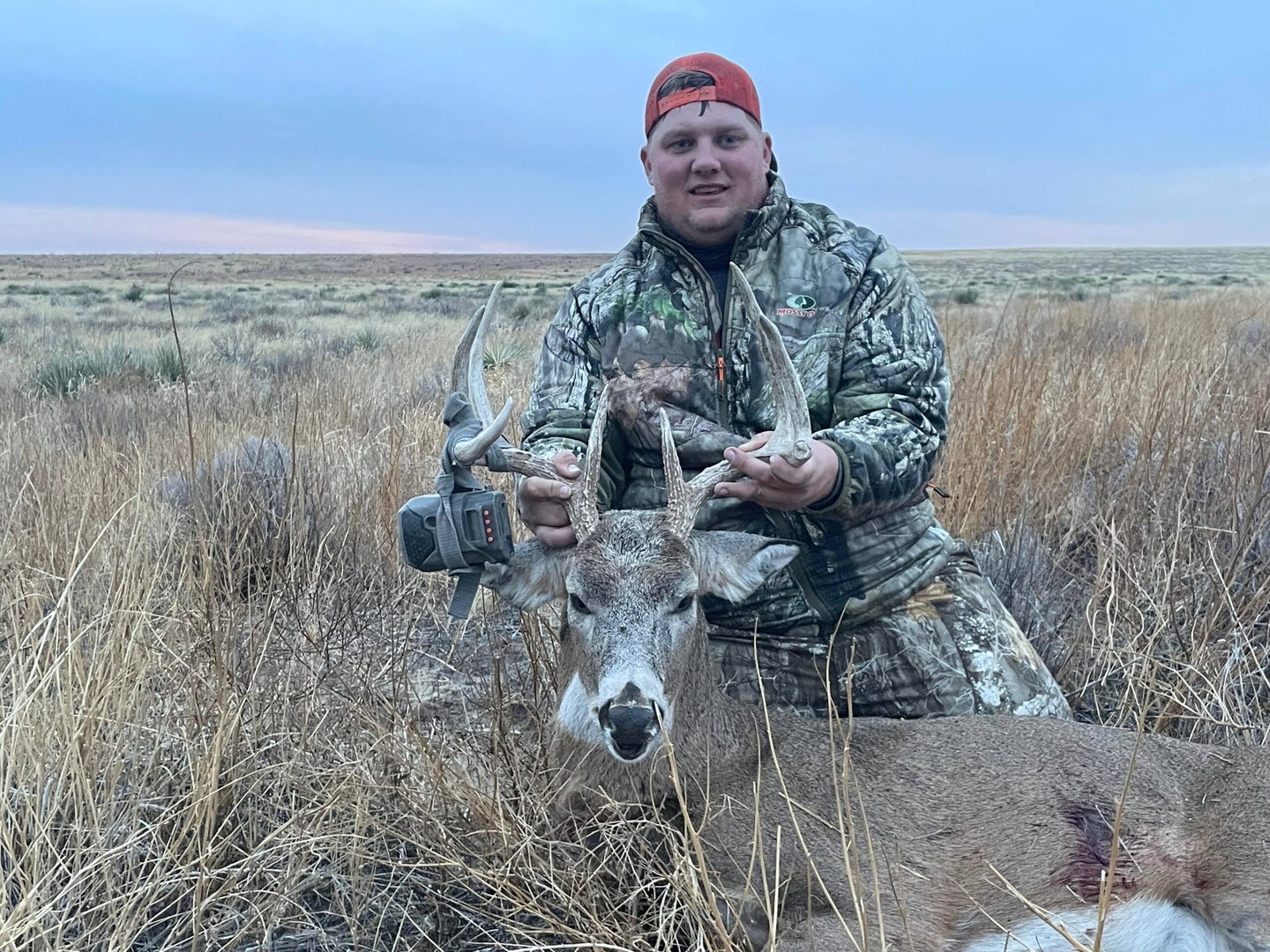 Kansas deer hunter Jake Mitchell lost one of his trail cameras this season. And like many hunters who have a camera go missing, he assumed somebody stole it. Little did he know that somebody would turn out to be an 8-point buck.

This past fall, Mitchell was running four trail cameras on his family ranch and farm. He typically goes out to pull SD cards throughout the season, but when he went to make his rounds in early November, he noticed something wrong. He’d put one of his cameras on a fence post, and instead of finding it, he found the post had been broken off and the camera was gone.

About a month later, on December 3, Mitchell had pretty much forgotten about the camera. He was out hunting with his cousin on the property where he lost it. “We were looking for a mule deer we had seen the previous afternoon,” Mitchell says. “We didn’t see him at all. But we did see a whitetail a long way off on another property, and it looked like he had a dead head hanging off his antlers.”

After waiting all morning for some action, Mitchell and his cousin decided to move on and go pheasant hunting around lunchtime. Then, around 4:30 p.m., with about two hours of daylight left, they returned to Mitchell’s deer-hunting spot.

“We sat in the pickup glassing for a bit,” Mitchell says. “ Then I saw the whitetail buck again. He was a lot closer this time, and on my side of the property line.” Mitchell also noticed that the object in the buck’s antlers wasn’t a dead head, but his missing trail camera.

Mitchell and his cousin were shocked, bewildered, and now determined to get the camera back. Mitchell decided to make a stalk to get within rifle range, and they both figured the best option was to use a low-lying draw to stay hidden.

Mitchell made it to within 85 yards of the deer before he settled in and waited for the animal to turn broadside. A few seconds later, the deer did, and Mitchell slowly squeezed the trigger. The shot connected, and the buck took off. It ran about 200 yards and fell over.

“My only mission was to put some more meat in the freezer,” Mitchell said. “I didn’t realize in doing so I’d end up getting my camera back. I honestly thought if a deer had been responsible, he would have rubbed it off the fence post. I figured the camera would have been dragged a ways, then shaken off and lost forever. A couple of buddies and I actually joked a week or so before about it being on a deer’s antlers.”

As for the camera, it ended up being damaged and the SD card had fallen out. But even though Mitchell didn’t get any pictures from the buck’s journey, he did end up with one hell of a hunting story.