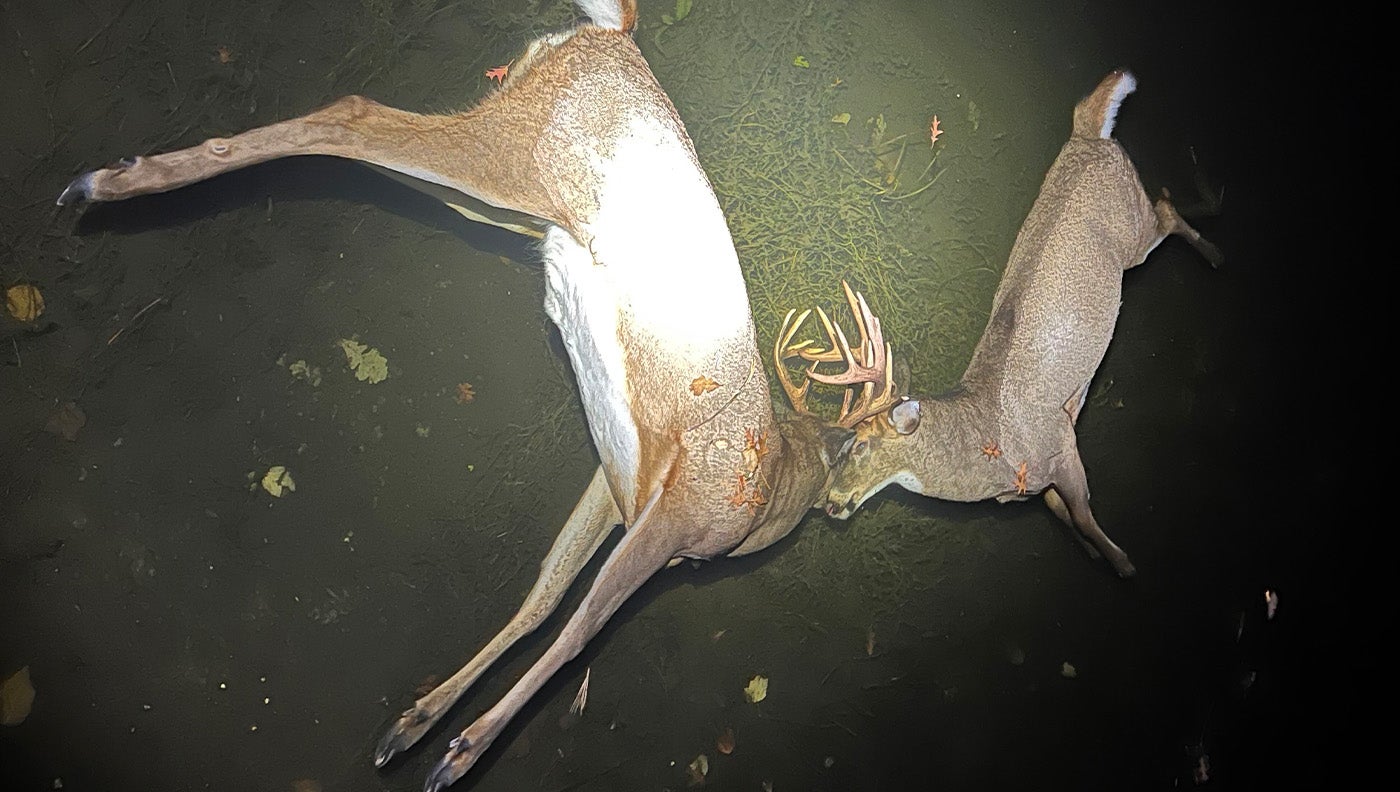 A homeowner found the deer floating next to her dock the following day. Minnesota Department of Natural Resources
SHARE

A Minnesota woman captured a stunning series of photographs back in late October when she found two trophy-class whitetail bucks floating dead in the shallow finger of a lake near her home. According to the Minnesota Department of Natural Resources (MDNR), the big bucks were engaged in an early rut sparring session when they somehow ended up in the lake. With their headgear hopelessly locked, they were unable to make it out of the lake alive. They drowned and were discovered by the homeowner the next day.

The woman who snapped the photos told a local radio station that three bucks had been frequenting her property in the days leading up to the incident—and then two of them turned up missing. She said her yard was littered with scrapes and tracks, and there was evidence of a struggle down near the lake shore, on the day that she found the deer floating.

“A tip call came in to our poaching hotline and two conservation officers responded on the scene,” MDNR spokesman Joe Albert told F&S. “They put a rope around the deer and used an ATV to pull them up to shore.”

In a photo provided by MDNR, the deer are seen floating in the shallow body of water with their sides partially above water. Other photos, shared by the homeowner and later posted to Facebook, show that the deer were in a heavily populated residential area when their battle went down.

According to Albert, the animals were still fresh enough that the meat could be salvaged when conservation officers pulled them from the lake the following day. “Somebody was there that wanted the meat,” he said. “So our officers issued a possession tag, and they left the deer with them.”

Read Next: Missouri Hunter Arrows Buck Locked Up With the Antlers of a Deadhead

Battles between bucks are common during the whitetail rut, and when antlers get too entangled it can spells disaster for one or both of the deer involved. Albert says that on one recent occasion Minnesota conservation officers were able to free a pair of locked-up bucks that were spotted out in a field. “It’s something we deal with every single year,” he said. “This kind of thing is bound to happen when bucks are out battling for does and territory.”