Hunting California Quail Without a Dog is Difficult—and Exhilarating 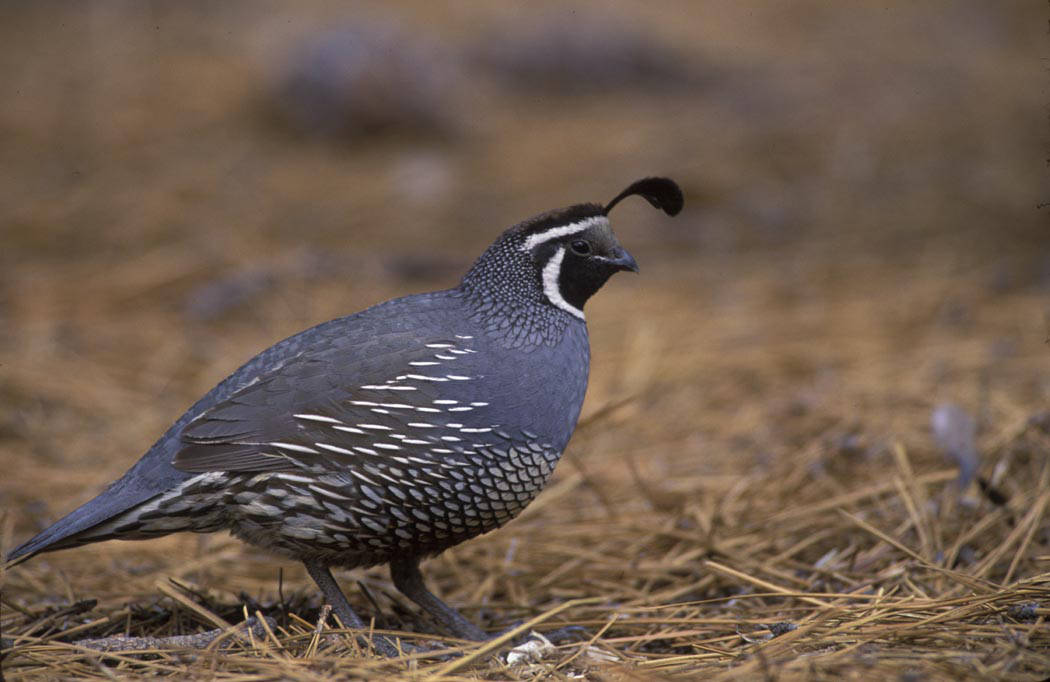 We saw the birds in the distance minutes after parking the 4Runner. They were milling around in an open area near a stand of oaks. In the early-morning light, we could just see their small triangular outlines against the hillside.

“Can you tell what those are?” I asked my hunting buddy Holly Heyser, wondering if they might be meadowlarks.

“I’m not sure,” she muttered, quickening her pace. Then one flushed, and another—blitzing up the hillside in a quick flash of wings before gliding toward a cluster of manzanitas.

“Quail,” said Holly, simply, as she charged after them. The rest of the covey flushed wild, and she blasted off a couple of quick shots in their direction as they dispersed. I rushed just to catch up with Holly, who was speeding up the hillside. Panting from the climb and disoriented by the explosion of birds, I wondered what in the world I’d gotten myself into.

We took a quick break to catch our breath then split up. I took the draw to the right while Holly worked the ridge to the left. By the time we met back up at the top of the hill, we were both panting, carrying handfuls of empty shells each, and were otherwise empty-handed—and grinning stupidly, regardless.

We were hunting California quail—or “valley quail”—together on a piece of public land in Northern California. And we were in for one of the most exciting—and challenging—days of upland hunting I’ve ever experienced. Here’s why it was so much fun.

Finding California quail during hunting season is not too challenging, even without a dog and on public land. The best place to locate them is along habitat edges or transitional zones. Quail need large shrubs to hold in, trees like oaks to provide shade and to roost in, and open areas to forage in.

“California quail seem to prefer successional habitat—not a flat-out grassland but something that combines grassland, bare ground, and woody cover together,” explains California Department of Fish and Wildlife biologist and upland game expert Katherine Miller. “They like blackberry bushes, toyon, and manzanita. From a foraging standpoint, they need to be able to see seeds on the ground. Their diet is typically comprised of things in the pea family.”

During the morning and evening hours of the fall, California quail can be spotted foraging in the open from a distance. During the middle of the day—especially when it’s hot out—they tend to hold tight in thicker cover, which can make them harder to find. But if you’re hunting on foot and start early, you’ll likely get some action. Hunting in terrain that has open areas also means that when you hit a bird, you should be able to recover it without the help of a bird dog.

You Can Chase Large Groups of Birds

Where California quail really differ from other upland species is their typical group size. While other quail typically form into coveys of 8 to 12 individuals, California quail congregate in much larger groups. According to Starker Leopold in The California Quail, the species forms into coveys of 27 to 73 birds. While running into a 70-bird covey would be exceptional, finding a 30- or 40-bird covey isn’t. “It’s super satisfying to see so many birds,” said Heyser, who primarily hunts mountain quail.

And once you find a covey, the action is non-stop. Birds will flush in every direction—which is a survival adaptation of the species meant to distract predators. Such massive flushes are exhilarating. Just make sure to focus and pick your target—and if you knock down a bird, mark it immediately.

But the fun doesn’t stop there. Keep an eye on the birds that you miss or don’t get shot opportunities on. Once you bust up a covey, you get to hunt down smaller groups of birds, and so on, which can keep the action going for quite a while.

The Shooting is Challenging—But Fun

California quail are quick—and small, with an average weight of only 6 to 7 ounces. And they’re wily. California quail that receive pressure tend to flush either right at cover height, often preventing you from getting a shot off, or when you least expect it. Several times on our hunt, birds flushed right when Heyser and I turned our backs on a piece of cover. Additionally, the country they occupy can get scrubby, and if you don’t drop a bird over an open area, your chances of recovering it without a dog go down, which limits when and where you can reasonably shoot.

For all these reasons, ethical shot opportunities come and go quickly—but this is all part of the fun. Hunting valley quail requires always keeping your gun at the ready and being aware of your shooting lanes. You’ll likely just get a second or two to fire when a bird flushes, and this quick-shooting pushes your limits as a wingshooter. And if you miss a lot, it’s ok; The next time you go for grouse, pheasants, or ducks, it’ll feel easy.

The Birds Are Vocal

It’s not turkey or elk hunting, but California quail does have a fun sonic component. California quail make a very distinctive chi-ca-go call. This assembly call is used to bring birds together. In the early morning and evenings when birds are feeding, it can pay off to wait quietly until you hear this call and then move in that direction.  Also, after flushing a covey, several birds will likely start calling almost immediately after they reach new cover. Even if you didn’t see where certain birds flew, keep listening, and you’ll likely find them soon.

Hunting with a Buddy Pays Dividends

Quail hunting can be done solo, but I highly recommend giving it a shot with a hunting partner. You’ll have plenty of time to talk when you’re looking for quail—and you’ll have an added advantage once you get into birds. As I mentioned earlier, quail like to flush away from you, often before you’re in range. If you have multiple sets of feet on the ground and a bead on where a covey might fly, you can work together to make sure at least one person is in a shooting lane to head off birds that flush early.

Another common strategy for chasing California quail with a partner is for each of you to work one side of a hill. Quail like to run uphill, and odds are, you’ll be able to pin them at the top of the hill and both have shot opportunities when they take wing. If not, at least you’ll have someone to commiserate with as you catch your breath.

“There, more quail,” I said, pointing at two distant birds pecking at seeds in a meadow 100 yards away. We hurried toward them, but they flushed before we got into range, flying to an oak tree, where we could already see other birds moving in the branches.

Read Next: Grilled Quail, Sausages, and Grapes With Polenta Recipe

We again charged up the hillside, this time pushing a covey of what must’ve been 40 to 50 birds. Most of them flushed well ahead of us, but a few of them sat just long enough for us to shoot. By the time we made it to the top of the hill, each of us had a bird in our vest—small but well-earned prizes.

“This is insane,” I said, bumping fists with Heyser.

“Definitely,” she said, before looking along the ridge toward a bird making the distinctive chi-ca-go, chi-ca-go assembly call. And we set off after it.