Recipe: How to Make a St. Patrick’s Day Reuben With Corned Venison

The Reuben sandwich isn’t exactly Irish, but you’ve got to do something with all of that corned venison 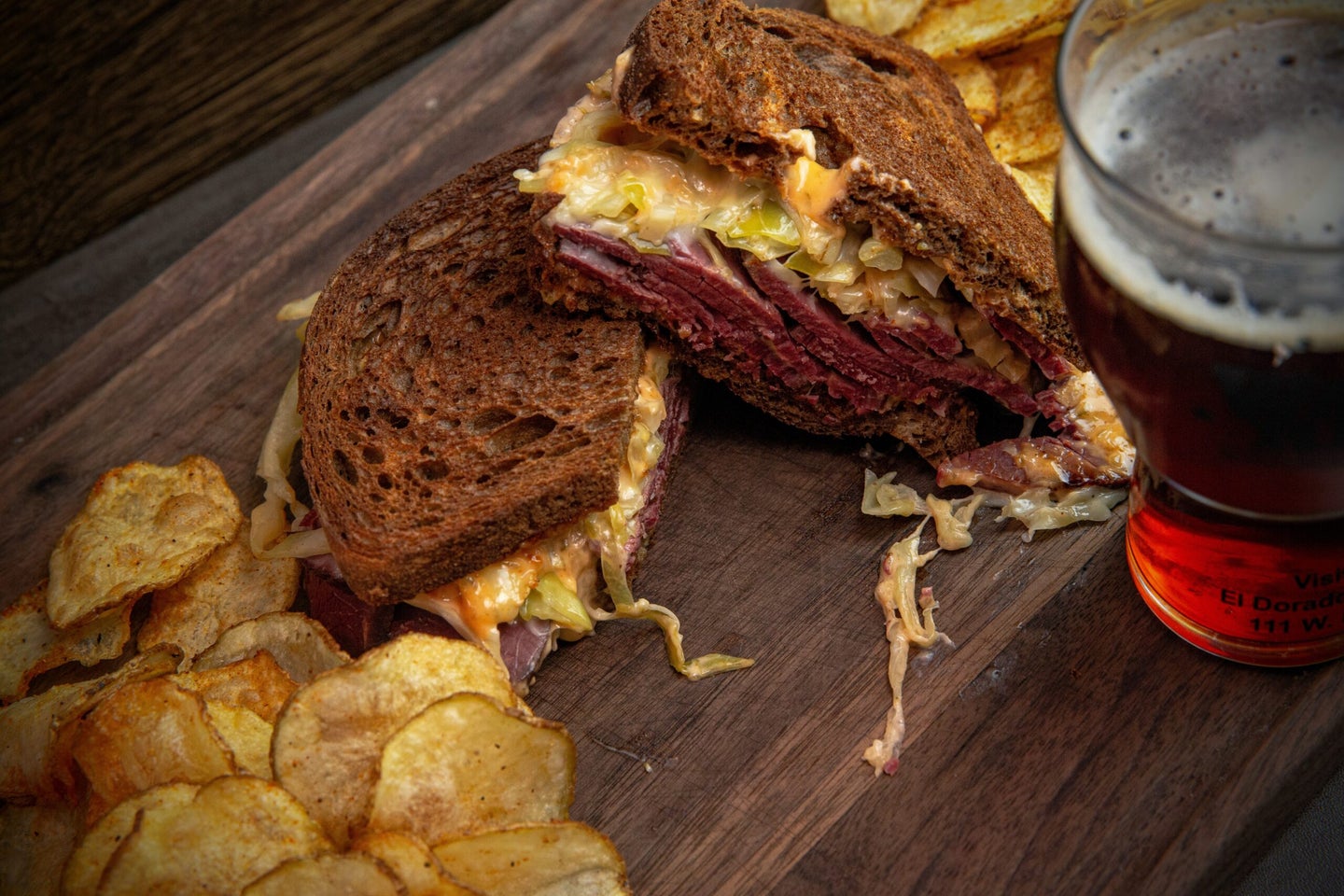 This venison Reuben recipe is based off of a popular Reuben from a restaurant in Spokane Washington. Jack Hennessey
SHARE

I know quite a few hunters who’ve always wanted to try corning venison around St. Patrick’s Day. But the process, to them, seems complicated. If you are one of those folks, I promise corning is one of the easiest ways to prepare venison. If you can trim silver skin and add ingredients to a pot, you can make corned venison.

Please note though: A venison roast will take at least a week to cure. So if you’re reading this and thinking of serving venison for St. Patrick’s Day, you might need to get cracking ASAP.

The Reuben below is based on one made famous by The Elk Public House in Spokane, Washington, where I used to cook. It is likely the best Reuben I have ever eaten. The TV show Diners, Drive-Ins, and Dives even covered the sandwich several years ago, and during my time at the restaurant, I always knew when a rerun had aired because we would get slammed with Reuben orders.

Some steps in this recipe call for specific equipment, but it’s not totally necessary. For example, you can sous vide cook the roast once it’s cured, but you don’t have to. However, if you want consistently sliced venison, you do need a slicer. Yes, you can slice the venison with a knife, but you’ll likely end up with thicker slices.

This recipe also calls for an Irish red ale. I like to cook with (and tilt back while doing so) Walnut River’s Warbeard, but I believe it’s only available in Kansas, Missouri, and Wyoming. If you’re not in any of those states, grab a Smithwicks or something similar.

Lastly, you don’t have to turn your corned venison into a sandwich if you don’t want to. If you just want to corn and cook your venison roast and eat it like that, go right ahead.

For the corned venison

For the hard cider kraut

For the Thousand Island dressing

For the bread and cheese

In a large pot, add all the corned venison ingredients other than the Irish red ale and the roast itself. Bring to a low simmer and stir until all the sugar, salt, and Insta Cure are dissolved. Add the pot to the refrigerator and allow to cool. As it cools, trim off any silver skin, fat, or fascia from the venison roast. Once the brine is cool in the fridge, add the venison roast to it and cure for 7 to 10 days.

Once venison has cured, place the roast in a large pot and cover with Irish red ale and simmer (at around 205 degrees Fahrenheit) for 4 to 5 hours, until the roast is tender, or you can seal the roast  (using a chamber vac) with a little bit of beer and sous vide for 12 to 14 hours at 165 degrees F.

Once the roast is cooked, remove it and pat dry. Keep leftover liquids from the pot or sous vide bag in a bowl in the fridge to use when assembling the sandwiches.

Reverse sear the corned roast in a skillet or on a grill over high heat to caramelize the exterior. Then place the seared venison roast back in the fridge to cool. (A cold, or mostly cool venison roast is easier to slice.)

To make the hard cider kraut, cut the head of green cabbage in half and cut out the stem. Thinly slice the cabbage and add to a large pot along with the rest of the ingredients. Ideally, you want the sliced cabbage mostly covered, but the cabbage will cook down, so you might not have to crack open the third hard cider. Heat the pot on medium-low and stir occasionally. Turn heat to low once the cabbage is softened and covered with hard cider.

For the Thousand Island dressing, blast a handful of sweet gherkins in a food processor (or you can finely dice them). Then mix all of the sauces in a bowl with the gherkins, and set aside until ready to serve.

Once the venison roast has cooled, cut in half against the grain (perpendicular to muscle striations) and slice to approximately 1/8-inch thickness. Heat up 5 to 6 ounces (perhaps more if you want a beefy sandwich) of sliced corned venison in a skillet. Add a bit of juices leftover from cooking the roast. Then add an ample helping of Hard Cider Kraut and top with enough Swiss cheese to cover the venison and kraut. Cook on low, covered if necessary to melt the cheese.

While your sandwich ingredients are frying, toast both sides of two slices of dark rye under an oven broiler, then lacquer on the homemade Thousand Island to each piece. Use a spatula to add the venison, kraut, and cheese to the bread, and cut in half to serve.