Kevin Christorf's monster is one of the biggest typical bucks taken this year—and should set a new Wisconsin state crossbow record. Here's the full story 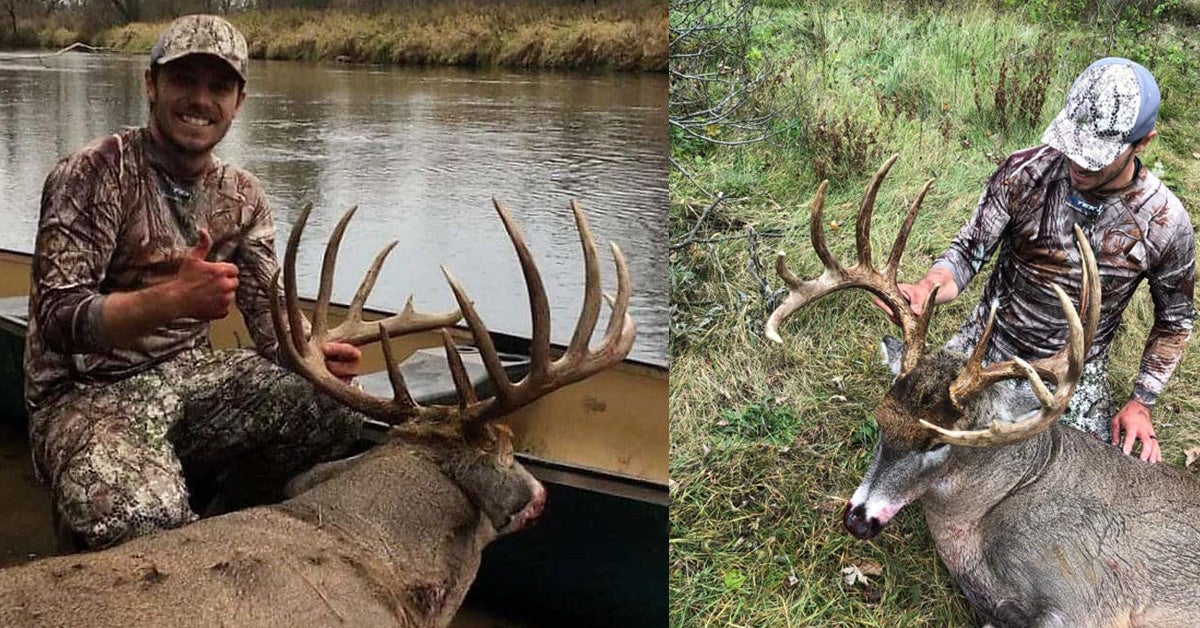 Kevin Christorf killed an absolutely massive typical buck in Trempealeau County, Wisconsin, on October 28, 2021. With an unofficial green score of 200-5/8 inches gross and 196-7/8 net, the buck stands to smash the current state-record typical crossbow kill. According to the Wisconsin Buck and Bear Club, the current state typical crossbow record was killed by Chia Vang in 2015 and netted 179-7/8 inches. Christorf’s buck is also potentially the largest buck ever taken with any kind of archery equipment in Wisconsin, as the current state-record bow kill netted 192-6/8. That buck was taken by Charles BoCook in 2018. Taking a state-record-caliber buck in Wisconsin is no small feat. The state is renowned for its slammer whitetails and consistently tops the Boone & Crockett Club’s list of the best record-book whitetail states.

The Badger State’s record typical gun buck is one of hunting’s longest-standing records—the iconic 206-1/8-inch Jordan Buck, which was killed in 1914. It’s important to note that several recent high-profile typical bucks from Wisconsin were later docked by scorers for abnormal points, namely the well-known Johnny King Buck, which was initially thought to top Milo Hansen’s iconic world record, and more recently, John Kassera’s buck, which was killed in 2015 and was initially considered the state-record typical bow-killed buck before being later found to have an abnormal point. That’s all to say that any talk of state records regarding Christorf’s buck is speculation until it goes through the mandatory drying period and is officially scored, but with more than 17 inches to spare for the crossbow record, it’s looking good for Christorf, and his buck will surely go down as one of the biggest typical bucks killed in Wisconsin—and anywhere else—this year. Here’s the full story of the hunt.

A Neighbor Clued Christorf Onto a Buck Nicknamed “Hector”

The big typical buck was first spotted by a neighbor, who captured the deer on a trail camera early in August, about a half mile from the property that Christorf hunts. The neighbor named the deer “Hector,” based on a character by the same name from the movie Troy. Christorf didn’t understand the buck’s name—he’d never seen Troy—but he did realize that the buck was massive. A couple days later, he started getting trail-cam pictures of Hector on the property that he and his wife, Bayli, hunt, which is owned by his father-in-law. It’s a 5-acre property that can only be accessed by canoe or boat.

“Once September—and the hunting season—rolled around, the buck disappeared,” Christorf tells F&S. “We weren’t getting any photos. Nobody was seeing him that we knew of. We found out later that a neighbor almost a mile and a half away had trail-cam photos of him that month. So, he’d completely moved out of the area.”

But then, the giant buck popped back up on Christorf’s cameras in October. Bayli had been hunting a lot in September and early October, but Christorf hadn’t been able to get out very much because of work and other personal obligations. He’s a conservation warden for the Wisconsin Department of Natural Resources but serves Clark County, which was not where he hunted the buck. Christorf and Bayli started getting more and more daytime trail-cam photos of Hector—and decided to do whatever it took to put a tag on him.

“In October, he was clearly starting to rut,” says Christorf. “Here in Wisconsin, the pre-rut is in late October and peak rut is the first week of November. We started hunting the buck very hard. I took a bunch of vacation days, and we were both doing all-day sits. Bayli had two different chances where she saw Hector.” But both times, she was unable to get a shot opportunity.

The buck especially liked to hang out in the neighbor’s cornfield but would regularly venture onto the property that Christorf and Bayli were hunting. “Four or five days before I harvested Hector, shooting hours had ended, and I saw a small buck under my tree,” says Christorf. “The small buck made a rub. Then Hector came in—but it was 4 and a half minutes after shooting time. He chased that buck off, and away he went. So that was the third encounter we had with him. The adrenaline was going.”

The Hunt for Hector Did Not Go As Planned

Bayli had to go back to work—she also works for the Wisconsin DNR—but Christorf decided to buckle down in pursuit of the monster. He hunted all day on Tuesday, October 26, and all day on Wednesday, the 27th, but did not see him, nor many other deer for that matter. “Thursday rolled around, and they were calling for heavy rains and possible storms,” he says. “I woke up in the morning and looked at the radar. The rain had held off. I was like, Well, I’m staying down at my father-in-law’s anyway. I’m going to go out and hunt.”

“I was canoeing across the river there, and I heard a buck snort and take off. It took a couple of big leaps and ran into the neighbor’s cornfield. I thought it sounded like a pretty good one. I crawled up into my tree stand and was sitting there. It was a pretty dark morning because of the overcast skies. All of a sudden, I heard corn rustling about 35 to 40 minutes into shooting hours. I could see him walking through the corn.”

At that point, Christorf figured he had a pretty good chance at getting a shot opportunity. “Along the river, there’s a tight pinch point. It’s a really good funnel, especially this time of the year. I knew if he got to the river, I had a 50/50 chance that he’d come right down to me. And that’s what happened.”

Well, almost. “He was coming perfectly down the trail. I was fully expecting to have an easy shot, but it’s hunting, right?” says Christof. “The wind was blowing right at him. He gets to the trail where I walked in, stops on a dime, and starts stomping. That’s about as bad a feeling you can have as a hunter. I fully expected him to bail. To be a buck of his caliber…he obviously got big for a reason.”

The huge buck stopped and then backtracked towards Christof’s canoe. He couldn’t see the deer for while because of the brush, but then the buck circled, following Christof trail all the way back to his tree stand. “He started licking my tree pegs and looked up at me, stomping. I didn’t have a shot. Finally, he starts to walk away, but he’s now upwind of me. Then he stops. It was about a 4- to 5-yard shot straight down. I took the shot, and the bolt went in perfectly right where I was aiming. I didn’t get a full pass-through, and he took off. He was running sideways, and I heard a crash just out of sight. I was very nervous but optimistic that he might be right where I heard the crash. I could see a massive blood trail from the tree stand.”

Hunter, Family, and Neighbors All Celebrate Together

First, Christorf called his wife, Bayli, then his father, and finally, Dakota, the neighbor who’d clued him onto Hector in the first place. Dakota decided to take off work and come help Christorf track the buck—and together, they quickly found the downed beast.

“We followed him to where I heard the crash, and that’s where the hugs and tears began. I’d be lying if I said I’d cried on other deer, but I teared up for this one. I couldn’t help it,” says Christorf. “To be honest, I was just in shock. We knew he was big, but seeing him in person felt surreal. I don’t really remember what went through my mind. I hugged Dakota, almost tackling him, then started to tear up. We worked so hard and passed up a lot of different deer. To have that success and luck on my side that morning…the emotion just got the best of me.”

After that, what Christorf called “the real work” began. He and Dakota had to pack out the buck—which dressed out at 233 pounds—and get it back across the river without tipping the canoe. Ultimately, though, Christorf says that “the sore back was worth it.”

Christorf initially scored the buck at 199 inches, but another scorer green scored it at 200-5/8 inches gross and 196-7/8 inches net. It’s by far the biggest buck Christorf has ever taken.

Read Next: The Biggest Early-Season Bucks of 2021

“The hunting community is truly amazing down in that neck of the woods,” says Christorf. “Everyone was so genuinely happy, and it was awesome. Everyone played a huge role in it. There aren’t many areas, at least from my experience, where neighbors are sharing trail-cam photos, hunting together, and just have those kinds of relationships with each other. I’m very fortunate to be able to hunt with such a good group of people.”

Christorf is a lifelong outdoorsman, and killing such a high-caliber buck is a dream come true. “I love being outdoors and being involved in the hunting community and part of a tradition that’s been passed on for years and years and years,” says Christorf, adding that he met Bayli through hunting as well. “I’m a very lucky hunter. That a buck of that caliber would come in downwind of me on my trail…somebody upstairs must’ve been looking down on me because that shouldn’t have happened the way that it did.”