The 6-level, 190-passenger ship was on a route from Memphis to Nashville, but got hung on a sandbar on Wednesday 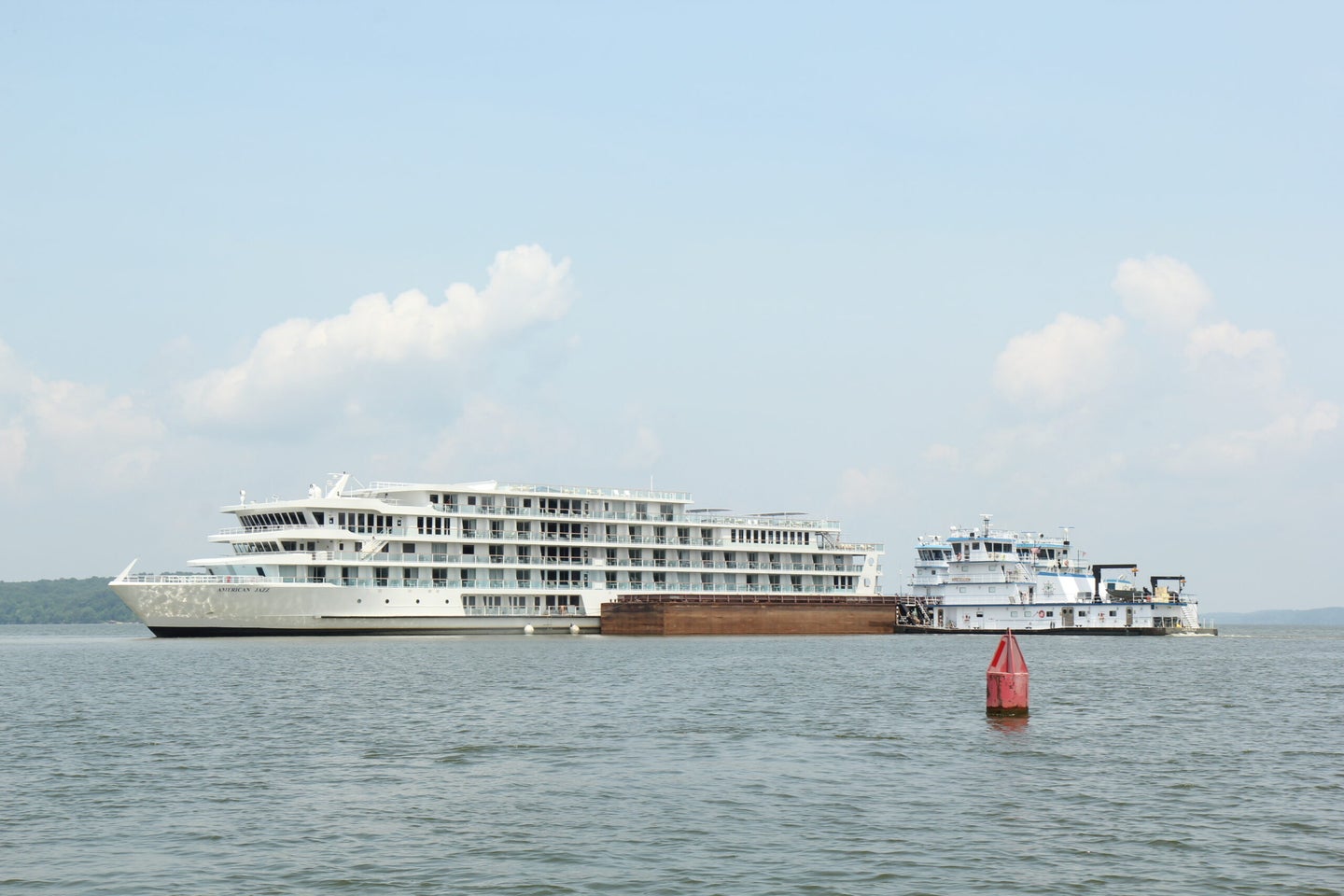 The American Jazz has been stuck on a sandbar flat on Lake Barkley since last week. Will Brantley
SHARE

There’s a big sand flat on Lake Barkley that can hold a lot of ducks in the wintertime, when the weather gets right. I’ve got a nice bull canvasback on the wall that I killed there a few seasons ago. At winter pool, that flat isn’t knee deep. At summer pool, it still only runs 4 to 6 feet—certainly not enough to draft a boat the size of the American Jazz, a 6-deck, 190-room cruise ship run by American Cruise Lines.

The boat was in route from Memphis to Nashville as a part of an 8-day “Music City” cruise that starts by going upstream on the Mississippi to the confluence with the Ohio River, then into the Cumberland River, of which Lake Barkley is an impoundment, and finally on into Nashville. But the boat got stuck on Wednesday, and today (Friday, July 9) the 120 passengers aboard are finally being disembarked and bussed to Nashville. There were an additional 54 crew members.

A public relations manager with American Cruise Lines said in a statement that “the cruise is expected to resume with a few adjustments to the normal schedule.” But my buddy Ryan and I launched his War Eagle earlier today at one of our favorite ramps on Barkley, and motored out for a look around ourselves. The American Jazz looks pretty damn stuck to us, with three tug boats working at once to free it. Lieutenant John Gulick with the Coast Guard said no progress has been made yet on moving the ship.

The Coast Guard is investigating the cause of the incident and overseeing the effort to move the ship. American Cruise Lines is working with the Coast Guard, Gulick said, to develop a plan that guarantees the safety of the passengers, vessel, and the environment. Gulick said the ship’s captain has been interviewed, and no alcohol or substances are believed to have been involved.

To a pair of locals in a camo John boat, it looked like the big ship just missed the west-side channel marker buoys and motored well up onto the shallow flat before it came to a stop. I’d guess it’s now sitting 100 yards, more or less, from the nearest red buoy. It’s not terribly surprising. Among local hunters and anglers, Barkley is notoriously shallow and full of sandbars, stumps, and logs. Even in the summer, and even in a fishing boat, you stick to the marked channels while running.

If the American Jazz remains stuck, one potential solution could be with the U.S. Army Corps of Engineers, which regulates the water levels of Lake Barkley. Right now, the lake is a few inches below summer pool, and the usual forecast is for a gradual draw-down of the lake in late summer and early fall. If that happens before the ship is moved, we’ll have to figure out how to duck hunt around it this winter. But the Corps can also raise lake levels at Barkley Dam, possibly floating the ship off the sand bar. American Cruise Lines has reportedly reached out to the Corps to help but to this point, the Corps hasn’t offered their assistance.

The incident is definitely stirring attention in the little area lake towns. I saw footage of the ship this morning on The Today Show, and recognized the area. When Ryan and I went for a look around, there was steady traffic of people gawking from pontoons and bass boats. One Coast Guard vessel that we could see was policing the area. Lt. Gulick urged boaters to stay away from the ship, and said that there’s a safety zone on Lake Barkley right now, between markers 61 and 64.

American Cruise Lines said in a statement that they’ve been operating on Lake Barkley for 10 years. Spots for the Music City cruise start at $4,295 per person, should you want to book a spot yourself on the next trip.