You don't need a trailer full of decoys to bring honkers into range. Here's how to shoot limits of geese with small-scale spreads 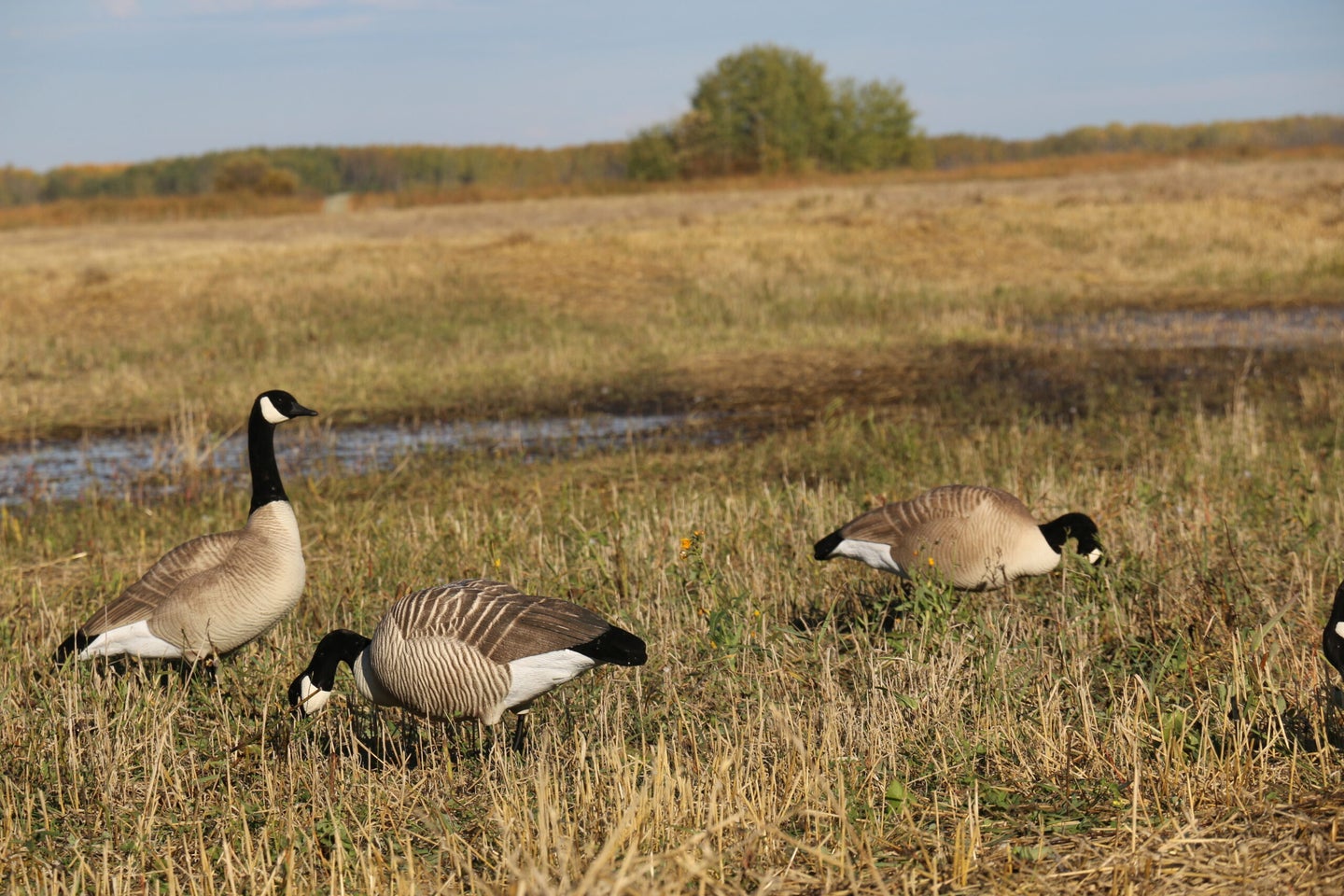 Hunting Canada geese seems to go hand in hand with massive decoy rigs, as hunters strive for maximum attraction and realism to lure in huge migrating flocks. However, some goose hunters face an inconvenient reality: They can’t afford or don’t have space for a big trailer to haul and store all those blocks. In fact, their goose spreads are often limited to the number of shells, silhouettes, and full-body fakes they can cram into their truck or sled, which can sometimes put them at a disadvantage.

Relatively small spreads can be effective on early-season geese in ag fields for several reasons: During special late-summer/early-fall hunts for nonmigratory honkers, geese are often still in smaller family groups. Also, depending on the size of the field and overall number of birds in the area, even a hot feed might only attract a few dozen birds. And because geese are keying on the X, you don’t need to overwhelm them with dekes. In fact, doing so can actually be counterproductive.

Many early-season hunters go with a simple three-blob approach, separating two- to four-dozen full-body decoys into three groups to imitate several smaller family groups. Each group should contain a mix of body postures; mostly head-down feeders but also one or two alert sentries and a loafer or two. Position one group of decoys almost directly upwind from the intended kill hole, and then stagger the others about 15 to 20 yards to each side and 15 to 20 yards downwind. That distinctly separates the groups and loosely forms a large open landing area.

If you have sufficient cover and it’s not too windy, you can hide field blinds near or within the upwind decoy group. Just make sure to offset them a bit to the left or right so birds aren’t staring directly at them when approaching into the wind. In cover-challenged situations or during extremely windy days, consider setting the blinds perpendicular to the spread, near one of the “wing” groups. This will help prevent geese from staring at them as they fly toward the setup. Also, during blustery days, shorten the downwind length of the spread so geese will have less opportunity to analyze the fakes as they approach low and hover over them while fighting the breeze.

How to Hunt Midday Loafing Areas

Geese often spend much of the day loafing at small waters between morning and evening feeding flights, and hunting those spots—stock ponds, small lakes, hidden bayous, and similar areas—can pay big dividends. Depending on the situation, you might actually be better off using a relatively tiny spread.

First, determine how many geese are using the area. If 50 honkers typically loaf there, you can probably get away with a dozen or fewer decoys, as geese already believe the area is safe, and you’re only trying to boost their confidence a bit by making it appear as though a few of their buddies are already there. If more birds are hitting the area daily, you can get away with a few more fakes, but don’t overdo it. Geese seem especially wary when they encounter large decoy spreads at loafing spots.

Throw two or three floaters in the water to represent birds that just landed. Then place several loafing- or sleeping-position full bodies along the shoreline. Add a sentry or two to the mix. Pay careful attention to how the first few birds react to your spread. If they set their wings and pitch right in, you’re good to go. However, if they circle several times and seem unconvinced, you might want to reposition the decoys or pull a few.

Decoying Tips for Frozen Fields in the Late Season

As with early-season ag field hunts, you can often get away with a smaller spread when targeting hardy late-season geese during freeze-up. In northern and midwestern areas, most migratory geese have already pushed through to wintering areas, so overall goose numbers have diminished. What’s more, birds focus intently on remaining food sources during this period, so you often don’t need 200 fakes to pull them to a hot feed. Even when 100 or so birds are using a field, you can usually create a solid spread with three- or four-dozen decoys.

Realism is critical during this period, as hard-hunted honkers are exceptionally paranoid, and cover is usually limited. As with the early season, mix several styles of full bodies into your spread, focusing mostly on feeders but also loafers and sentries. Full-body feeders mounted on motion stakes can perform well during the late season, as there’s less cover to block the wind, and they often move easily and naturally, enhancing realism. If you need to boost numbers a bit, add some shells and silhouettes. Shells can be especially handy during tough-cover hunts, as they help hide blinds and hunters.

Many spread configurations can work during freeze-up, including a blob approach, a loose crab-like rig with two arms extending downwind, or a long, loose V or J configuration. Observe birds as they use the area, and try to base your spread on their behavior. Are they tight in one area or staggered across a larger swath? Whatever configuration you choose, remember three basic rules:

In addition, let the sun work for you whenever possible. Freeze-up geese sometimes make just one feeding flight per day to save energy, often right before dark. If the wind and situation allows, position your blinds and spread with the setting sun behind you to obscure the vision of sharp-eyed honkers.

Load Up the Truck

Certainly, many goose hunting scenarios demand monster spreads and the huge trailers and two-hour setups they require. But in a surprising number of situations, you might be set with the two- to three-dozen blocks—or even fewer—you can stuff in your vehicle. If you look hard enough, you’ll find those situations this fall. Just be sure to leave enough room in your truck bed to stash that strap full of honkers.