Widespread drought conditions will make for a challenging season for many duck hunters, according to Delta Waterfowl's fall flight forecast 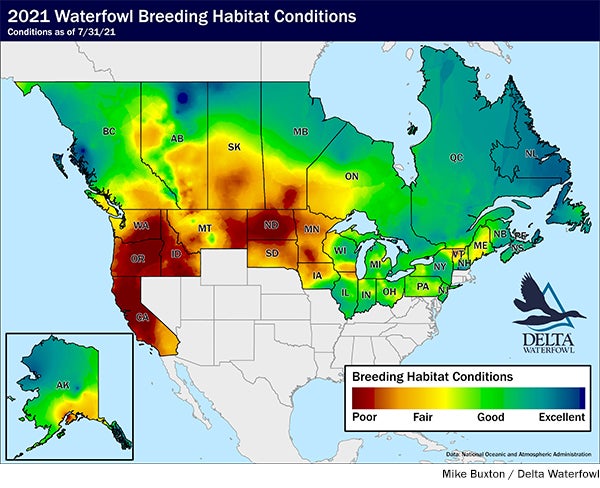 Many waterfowlers will see fewer, warier ducks over their decoys this season, especially in the prairie pothole region. Because of dry conditions in the Midwest and West, Delta Waterfowl’s fall forecast predicts poor recruitment across much of the country. The expected lack of young ducks will make for tougher hunting and has prompted concerns over longer-term population declines.

“The prairie pothole region — the most important duck production area on the planet — is almost universally dry,” says Dr. Frank Rohwer, president and chief scientist of Delta Waterfowl, in the report. There will be far fewer juveniles in the fall flight, and that’s unfortunate because the best seasons are those with an abundance of young ducks.”

Many Ducks Do Not Breed in Drought Conditions

The driest part of the prairie pothole region is North Dakota, a vitally important state for waterfowl reproduction. Pond surveys conducted by the North Dakota Fish and Game earlier this year showed pond counts 67 percent below the long-term average. Conditions were only slightly better across the border in Canada’s prairie provinces. Although adult ducks can survive a drought, they won’t breed during one. Some ducks have stayed in the prairie pothole region on what water they could find while others migrated north to summer in the wetter boreal forest.

Adult birds will still migrate this fall. Hunters can expect a decent fall flight as overall duck populations remain above the long-term average. Some species are faring worse than others. Delta predicts that mallards, wigeon, pintails, and canvasbacks saw especially poor production due to lack of water in their preferred breeding areas. Pintails, which breed in shallow Saskatchewan wetlands, will likely show an especially steep decline.

Rowher believes many early-nesting bluewings were able to pull off broods before drought dried up many ponds. He also reports seeing good numbers of teal as he traveled the prairies. Greenwings nest farther north, in the parklands and boreal forest, where nesting conditions were better. Gadwall and ringneck populations should also all fare well.

Drought conditions in California, Oregon, Washington, Idaho, and parts of Alberta and British Columbia paint a similarly discouraging picture for Pacific Flyway hunters. The only bright spot in terms of water conditions is the Atlantic Flyway, where excellent water conditions in eastern Canada should result in good mallard production.

Ducks Will Be Warier This Fall, But Still Plentiful

With overall duck numbers still above average, Rowher says it’s too soon to panic. Drought years play an important part in rejuvenating potholes by allowing vegetation to grow in dry basins. If the water returns next year, the ducks will bounce back. Despite the dry conditions this year, hunters will see birds.

“There are still plenty of ducks, and we feel the liberal regulations in place for the coming season are entirely appropriate,” Rohwer says. “Hunting has little to no effect on the ebb and flow of breeding duck populations because we primarily shoot juveniles.”

Whether this year’s low production turns out to be a temporary blip or the beginning of one of the periodic droughts that lead to restrictive seasons and low bag limits remains to be seen. For now, hunters who can elevate their game enough to fool warier birds will still be successful.