Getting canvasbacks, bluebills, and other divers into the kill hole requires a strategic (and big) decoy spread 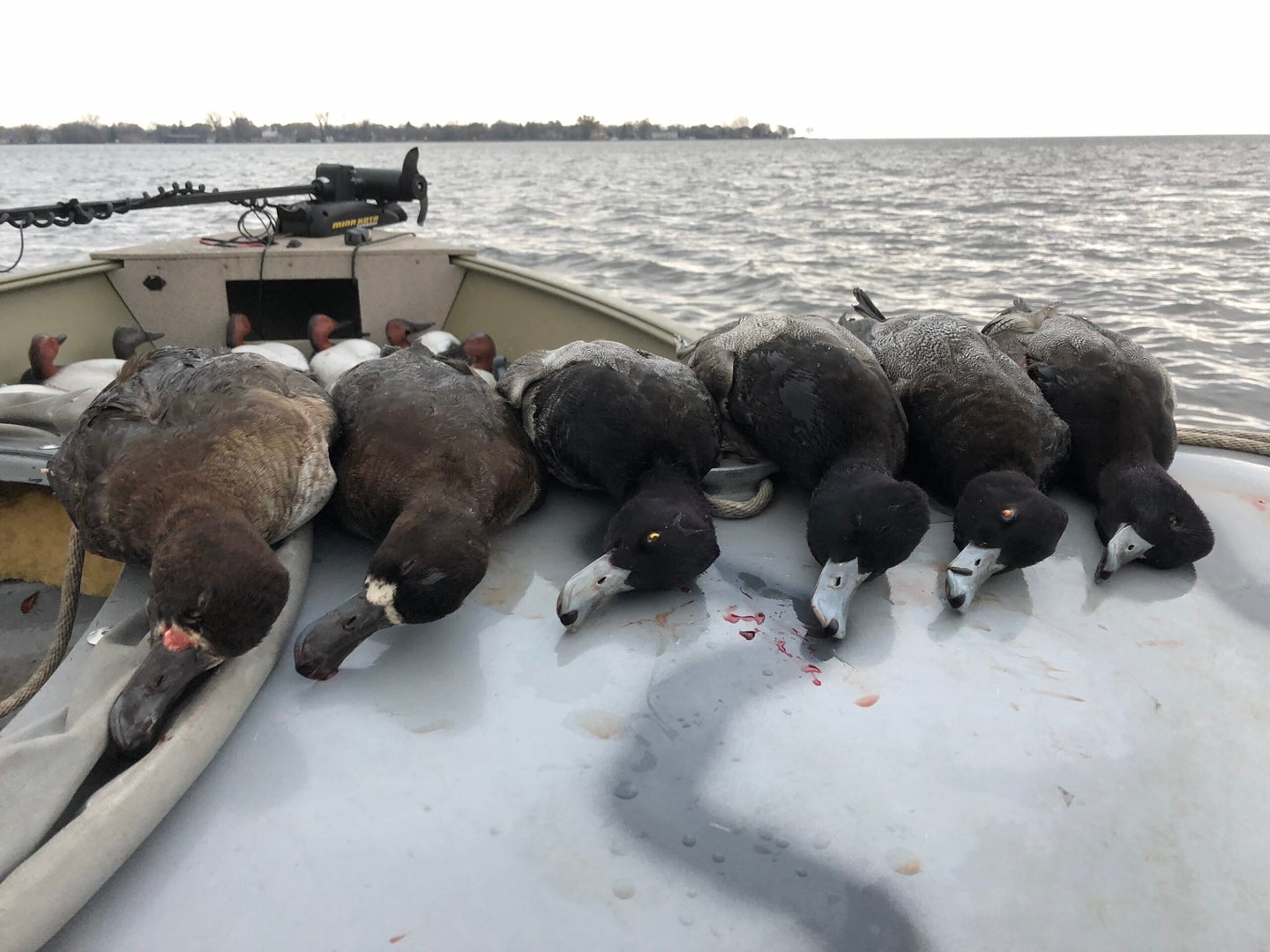 Somewhere during waterfowling’s evolution, diving ducks earned a reputation as being fun to shoot but not in the same league of wariness as their puddler brethren. So, many casual diver hunters expect to shoot piles of black-and-white birds while using a simple, straightforward approach.

Those folks have obviously never sat on Green Bay or Pool 9 of the Mississippi River and watched tens of thousands of divers avoid a gauntlet of decoy spreads and leave hunters cussing at the boat landing. No, pressured divers aren’t as tough as Arkansas mallards, but they can be plenty frustrating, especially if you don’t bring your A game. These hunting tips and best practices can help you avoid the diving duck funk this season.

Everyone knows that big-water diver hunting requires lots of decoys to attract birds from long distances and mimic the huge rafts of migrating ducks that mass during the migration. However, many hunters simply toss out a wad of fakes and expect bluebills and canvasbacks to pile in. Random, amorphous spreads might attract divers, but they won’t channel the approach of ducks or entice birds to finish.

Divers differ from puddlers in that they typically fly directly over other divers while approaching a potential landing spot. Astute hunters have realized this for years and often configure diver spreads in classic J or V formations, or extend a long tail of decoys downwind leading to a much larger mass of fakes. The tail acts almost like a runway that ducks can follow to the kill hole. Trouble is, many guys neglect the kill hole, leaving an insufficient open area—or no area—for flocks to set down. That leads to birds streaking over the decoys at Mach II, or landing short or outside of the spread.

1. The Importance a “Kill Hole”

The fix is simple: No matter which decoy configuration you prefer, leave a generous open area where large flocks of divers would feel comfortable landing. That might be a large semi-circle in a classic J-hook or several yards of open water between a tail and the main body.

Hunters in some highly pressured areas have abandoned classic spreads because they believe divers see them too often, and they instead set long, loose blobs of decoys to appear more realistic. That’s great, but even then, you must leave a large enough kill hole where birds can finish. If not, you’ll see lots of fly-overs and short-stoppers.

Some diver hunters get finicky about the species composition of decoy spreads, reasoning that canvasbacks, bluebills, redheads, buffleheads, and other species should naturally decoy better to their own kind. I’ve never been too picky during multi-species diver hunts, as it seems like almost any diver will decoy readily to bluebill or canvasback decoys. Goldeneyes are an exception, as those late-season divers often work much better to goldeneye decoys. Also, in areas where one species is far more prevalent than others—canvasbacks on the Mississippi River, for example—it only makes sense to load up on decoys that mimic the dominant duck in that area.

2. Where to Position Diver Decoys

Where you position decoys in relation to your boat, blind, or the shoreline is critical. Many hunters intuitively set their hides directly upwind of the blocks, hoping for feet-down incoming shots. That can work during windy days or other ideal conditions, but it’s a recipe for failure many other times.

Remember, diving ducks are built for open water, and they find safety there. Unless the wind is howling offshore, prompting birds to seek lee shorelines, divers instinctively want to land where they can see open water in front of them. They will shy away from landing directly toward shorelines, islands, and other landforms. Take advantage of this trait by configuring decoys so birds can see open water behind the spread when finishing. Obviously, this is much easier when you’re hunting open water, or on islands or distinct points, where you can set decoys to one side or the other, with at least some open water behind the blocks.

When hunting flat or indistinct shorelines, it’s often smarter to set up in a crosswind, as that will leave plenty of open water upwind of your spread. In fact, crosswind spreads are often generally good ideas when you have poor cover, are hunting from an open-water boat blind or are dealing with finicky birds. Setting up perpendicular to the decoys keeps birds from focusing on your hide as they approach. And if done correctly, this will facilitate good crossing shots at decoying birds.

3. Funnel Ducks into the Spread

On smaller waters with sufficient terrain features—such as islands, points, bays and channels—you can turn another aspect of diving duck behavior to your advantage. Again, divers are adapted to open water, so they usually prefer to fly over water instead of land. Therefore, they often follow funnels in flight, traveling through river corridors, relatively narrow channels, points near bay mouths and similar areas instead of simply zipping over land like puddlers would do. Those water funnels make great ambush sites.

My favorite situation for this trick occurs when hunting prairie potholes. Often, I’ll glass birds jumping from one spot to another by following a narrow hourglass-like neck between two sloughs. Then, I’ll set up at the narrowest point of the neck, place decoys somewhat upwind of my hide and wait for birds to pile through. Such scenarios aren’t the best for decoying ducks, as the birds are typically on a mission to another destination. However, it funnels them within range, and the decoys often make them slow down long enough to offer manageable shooting. And you won’t have to worry about birds stopping short, as when hunting large areas of open water.

4. Add Motion to the Decoy Spread

Any duck hunter knows about the importance of motion to attract ducks, as it gets the attention of birds from afar and makes decoy spreads look far more realistic. This isn’t often a problem during big-water diver hunts, as wind usually produces sufficient current or chop to make your blocks swim. However, a few tricks help.

Spinning-wing decoys can work well, but divers seem to ignore them many days—especially now that spinners are so ubiquitous. During calm conditions, jerk rigs look great, imparting movement in otherwise flat water and stagnant decoys. Likewise, pulsators or swimming decoys can create life in dead spreads.

The wrong type of motion, though, can present problems. Light plastic decoys are popular, as they’re relatively inexpensive and look fantastic. But on relatively rough big water, they often jerk and bounce unrealistically, even when anchored with heavy weights. Heavier keeled decoys, such as foam-filled or burlap-covered models, ride rough water much better. They swim, rise, and fall more like real ducks in the chop. They cost more and are a pain to transport, but the added realism is often worth the hassle.

Many diver hunters use multiple-decoy rigs, commonly called long lines, which consist of a long mother line to which several decoys are attached via drop-lines. These work great for quickly deploying and picking up giant spreads. But in calm water or when pressured divers fly at relatively high altitudes, those lines look like, well, lines of fake ducks.

You can work around this problem by placing a few single decoys between lines or around your boat or blind. V-boards, which are three- or four-paneled silhouette rigs, can also break up the lines. In addition, decoy mats have become popular. These large mesh mats let you attach several decoys in any pattern you like and then sink below the water line when deployed. They’re a great complement to traditional long-line spreads.

Put it All Together for an Epic Diver Hunt

This season, avoid the trap of merely throwing out a few dozen decoys and expecting to fill straps of divers. Put some extra thought into your spread and setup. The results—in the forms of cans, redheads, bills, buffs and other divers—will be apparent.