He Knocked on a Door, Got Permission, and Arrowed a 200-Class Kansas Stud

Louisiana DIY hunter Holden Torres planned to hunt public-access areas. But he and his buddy got permission on a small farm and took home 350 inches of antler 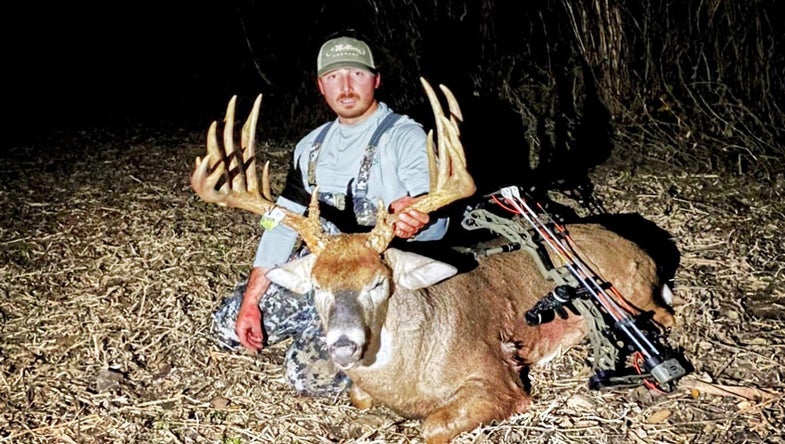 You can manage a bunch of ground or hire a good outfitter, and you might kill a world-class whitetail. But Holden Torres, a hard-working bowhunter from Louisiana, does none of that. Instead he relies on research, online mapping tools, boot-leather scouting sessions, and plain old hunting skill to get on trophy whitetails. All that hard work paid off for Torres on November 9, when he arrowed a 200-class Kansas Walk-In-Area whitetail on a DIY hunt with his friend Austin Bass. Here’s his story.

Torres actually started planning the several years ago. “Back in 2017, I was injured and laid up on the couch, so I started researching spots in Kansas for a bowhunt for Austin and me,” he says. He decided on a zone that looked to have good deer habitat and plenty of Walk-In Hunting Areas, private lands leased by the state and open for public hunting. “We’d done some turkey hunting up there and liked what we saw, so this past April, we put in for the nonresident archery deer draw and were successful.”

Torres and Bass made a scouting trip to their hunting area over the Forth of July weekend. “We scouted several WIHA’s and even found a couple of sheds,” he says. “We spent some time talking to local farmers and were given permission by a landowner to hunt the ground behind her farm buildings. We were excited and planned to come for a hunt on the September opener. But we both work for power companies, and when Hurricane Ida hit, that hunt got cancelled. Austin and I were putting in 16-hour days for three straight weeks.”

When the pair finally reached Kansas during first week of November, they hit their WIHA grounds to scout and found more than deer sign. “There were other hunters on almost all the spots we’d scouted in the summer, so we kept looking for more,” Torres says. “We also made contact with the landowner who’d given us permission. While chatting with her, we learned she had another 80-acre tract that she said we could also hunt.” They scouted the property and found good sign near a creek crossing. They hung a camera there and hunted the main farm that evening. “I hadn’t been in stand long before I saw a tall-tined buck heading toward Austin’s stand. Not long after that I got a text from him saying ‘I just shot the biggest 8-point I’ve ever seen.’” Austin had watched the big 8 brawling with smaller buck; when the fight broke up, the big one walked right to Austin’s stand, and he made good on the shot. The buck scored 150 inches as a clean 8-point.

The next two days were mostly uneventful, and after the second evening’s hunt, Torres went to check the camera on the 80-acre parcel. “I had it on video mode and this giant buck walks in to check a nearby scrape,” he says. He showed the video to his buddy, who felt the buck would go 190 inches at least. The parcel had only 25 acres of timber, but two fencerows met nearby, with bean fields on either side and standing corn not far away. “Everything kind of came together near a cedar thicket,” says Torres. “I decided I would only hunt the spot with a North or Northeast wind.” While he waited for the right wind, he hunted more public ground and kept scouting for more options.

On the afternoon November 9, Torres finally had the wind he needed to hunt the 80-acre tract. “I got there around 2 pm.” he says. “I felt like the deer didn’t really live there, but it was a great funnel for them. I cut a couple of limbs, then settled into the stand, which I’d hung near the creek crossing where I’d had the camera.” At around 4:30, Torres rattled and grunted and saw a pair of does being chased by a small 8-point. When things settled down, he rattled again, with a longer sequence of about 90 seconds. “As soon as I finished, I looked up and saw a big deer heading my way. He came right into the fencerow with me, about where I’d cut those limbs. He stopped to make a scrape and was about to head into the creek crossing.” Torres buried the pin on his vitals and touched off the shot. The buck let out a loud roar when the arrow hit and ran a short ways before Torres saw his legs buckle. He tipped over about 30 yards from the stand.

“I called Austin and said ‘I just shot him,’ and he said ‘The one in the video?’ and I told him I was looking at him, dead. Austin said he’d right be over, and when he got there, we walked up to the buck together and back-slapped and hugged. I couldn’t speak. The buck looked like a dinosaur. I finally said, ‘Austin, I don’t know what to say.’

“Giant” is an apt description for Torres’ buck, which green grossed 199⅜ inches. “He just carried his mass everywhere,” Torres says. The smallest circumference measurement was 4-6/8 inches. Both main beams are over 25 inches and the buck’s G2s are over 12 inches. With a right-side score of 90 and a left 89, plus a 20-inch inside spread, the buck nearly broke the 200-inch mark for typical, which is rare indeed. “I’ve been bowhunting since I was a boy, and I honestly didn’t think it was possible for a guy like me to kill something this big. Austin and I have had some pretty amazing hunts, but I doubt we’ll ever have another year like this one.”