Remains of Elk Hunter Missing Since 2019 Recovered in Wyoming

Earlier this month, a group of hunters in Wyoming found a rifle that led to the discovery of human remains belonging to a missing elk hunter 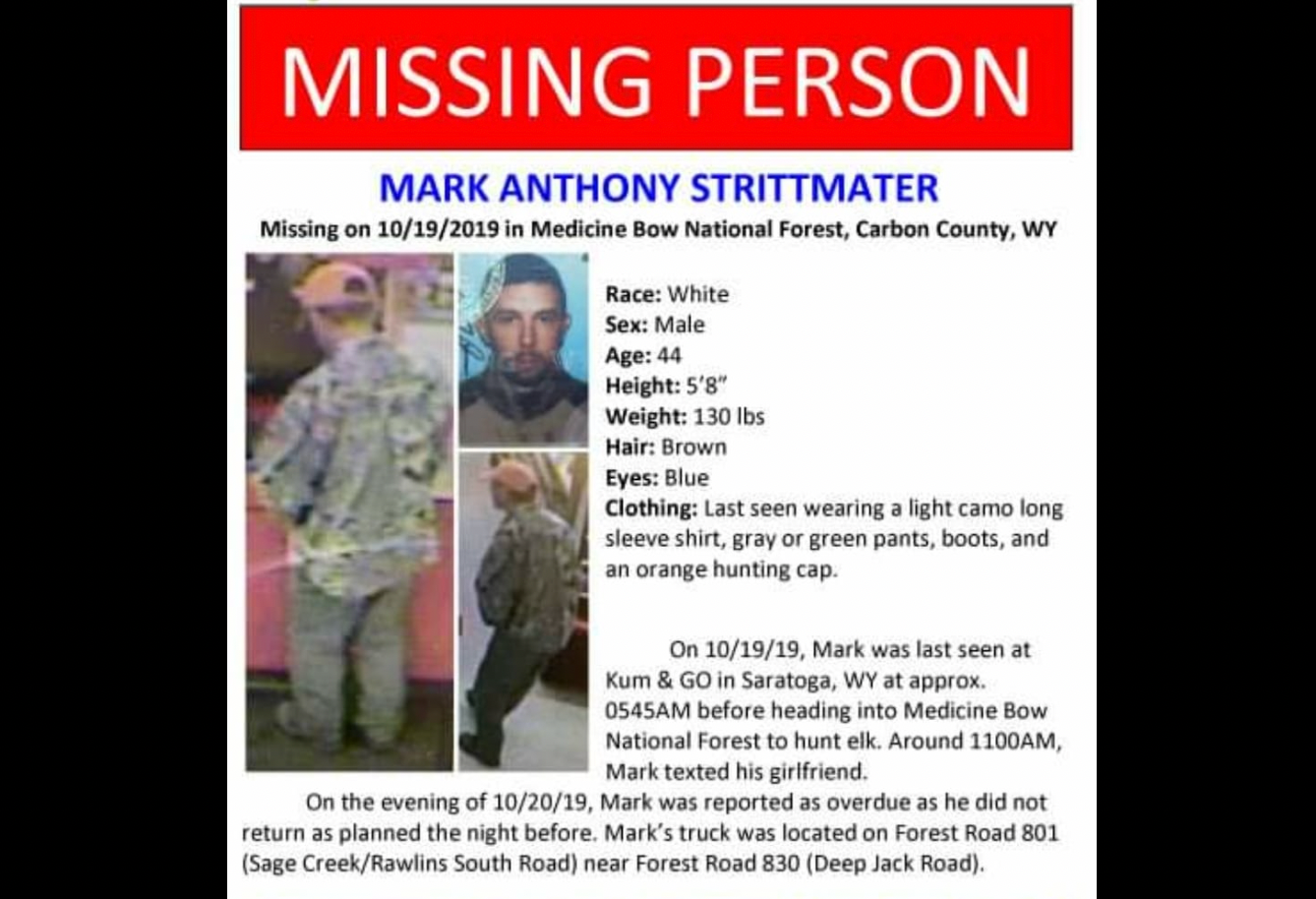 On October 16, a group of hunters in Wyoming found a firearm beneath a clump of vegetation. The discovery spurred a search that eventually led investigators to human remains. According to a local Wyoming media outlet, the remains belong to an elk hunter who went missing in the area during a 2019 snowstorm.

Elk hunter Mark Strittmater disappeared on October 19, 2019. In the year since, his disappearance has become one of Wyoming’s most prominent missing persons cases. An announcement posted on the Missing Persons Cases Network Facebook page at the time noted that Strittmater, a 44-year-old, was last seen at a convenience store in Saratoga, Wyoming before heading into the Medicine Bow National Forest to hunt elk.

Several search and rescue teams spent more than a week searching for Strittmater immediately after he went missing, but they were hampered by heavy snow. A member of one of the search parties said that the remains found last week were 325 yards from where his team conducted their initial search efforts.

According to the Carbon County sheriff’s report, the hunters who found the firearm alerted a Wyoming Game and Fish Department warden, who then called the sheriff’s office and the Carbon County Coroner’s office. An initial search, undertaken by county officials and personnel from the University of Wyoming Department of Anthropology and the Wyoming State Archaeologist’s Office, uncovered personal belongings and partial human remains. A second search, on October 20, recovered more remains and personal items.

In November 2020, a hunter found Strittmater’s binoculars, setting off another search. That effort, which involved a K-9 unit, uncovered “other items” that may have belonged to the missing man, but no human remains.

Once the remains were located, authorities awaited test results before confirming that they belonged to Strittmater. “They’re [also] looking to see if they can find any additional items,” Carbon County Sheriff Archie Roybal said in a recorded interview. “I’m not going to say I’m a hundred percent sure that that is [Strittmater]. We’re trying to make sure that we can do confirmation through scientific analysis.” According to Cowboy State Daily, that confirmation came late in the afternoon on Wednesday October 26, nearly three years to the day that Strittmatter went missing.