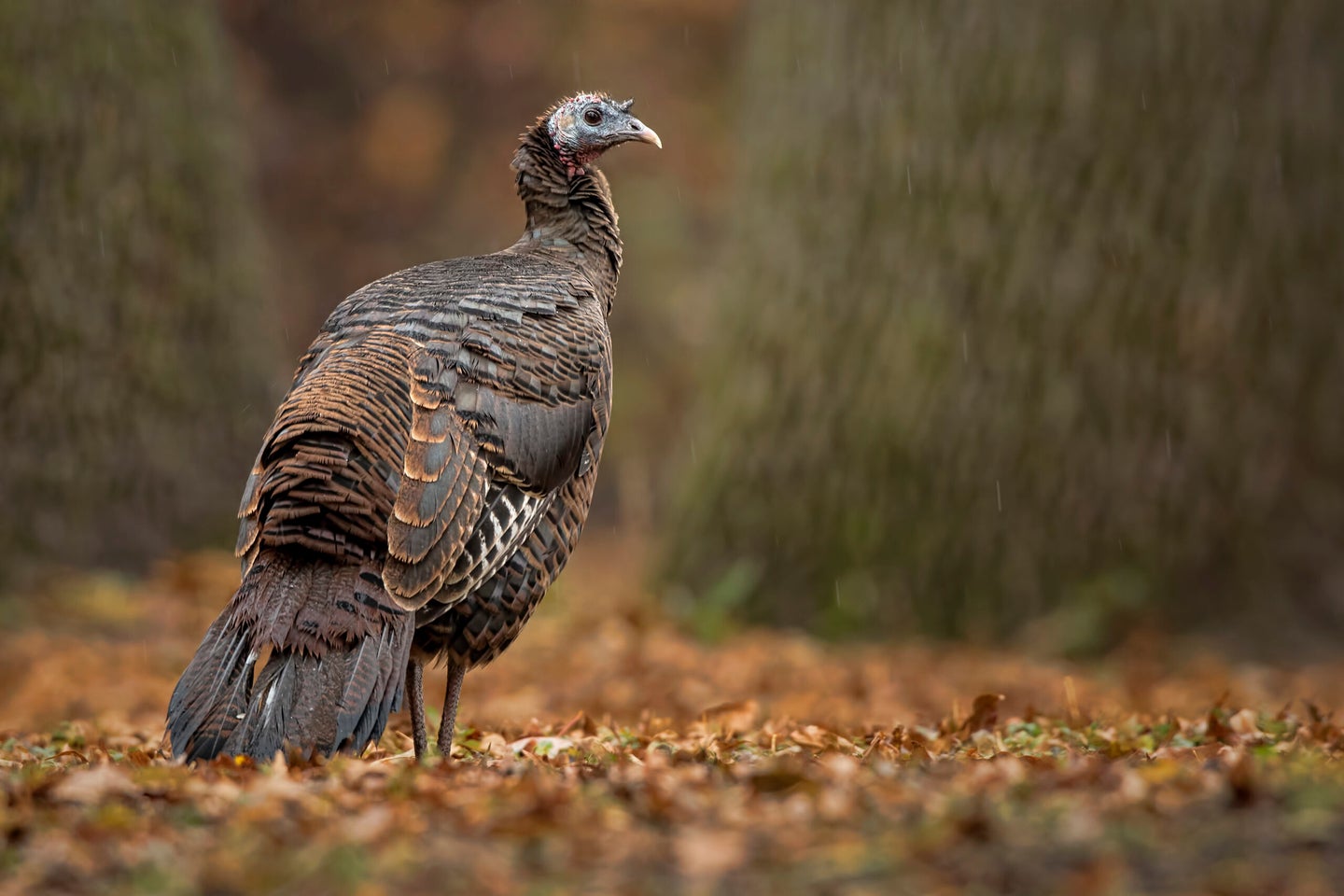 You can hunt fall turkeys just like big game if you do some scouting first. Scott Denny via Getty Images
SHARE

Slinging the 12-pound jake over my shoulder, I headed back to the truck, pleased with the success of another fall turkey hunt. Only this one was different from most such outings.

Instead of breaking up a flock of hens and young birds, I had located the group of turkeys I took this jake from using binoculars, made an educated guess about where they were going, and set up a few hundred yards ahead of them. Half an hour later, without uttering a single yelp, I squeezed off on the plump jake and watched the rest of the flock scurry away, only mildly alarmed.

Predicting movement patterns is how we kill whitetails. It’s also a great way to tag a fall turkey. It’s particularly useful on western hunts that feature lots of open terrain and scattered woodlots where birds can be spotted far off and it’s often difficult to get close enough for a good breakup. It’s also a very effective way to take a turkey in many eastern areas with semi-open habitat.

No one would want to totally give up the traditional method of turkey hunting in autumn. Locating a flock, breaking up the birds, and then calling them back is a great way to enjoy the outdoors this time of year. But don’t rule out a spot-and-stalk approach for turkey hunting just because it’s “not how it’s done.”

Why a Big-Game Hunting Approach For Fall Turkeys Works

Over two-thirds of states offer fall seasons when the weather is usually cooperative and bird populations are at a peak. Here are a few reasons to consider hunting fall turkeys more like they’re a big game animal than a bird.

For one, it’s simply a challenging and rewarding way to hunt, just as it is when you study a local population of deer or elk and shoot one by predicting their natural movements and daily routines.

Hunters who aren’t particularly good callers may want to use this approach, too. It doesn’t matter how horrible your turkey talk sounds if you don’t call.

It’s also a good hunting method when birds have been heavily pressured and are call-wary. Such birds may have been scattered multiple times by turkey, deer, and small game hunters and be wary of readily coming to a call.

If a group of mature gobblers are involved, splitting them up and calling them back in is sometimes nearly impossible. The old toms may stay scattered for hours or even days. In other cases, they may regroup without even calling. Locating, then setting up and ambushing those longbeards is often more likely to succeed.

A final reason to consider this tactic is to avoid excessively disturbing the local flocks of birds where you hunt. Many states have multiple tags for harvesting more than one turkey. If you want to come back to the till and have the birds where you hunt not scared out of their wits and broken into smaller groups, ambushing a bird is far less disturbing to them. They will probably stick to their normal travel patterns, allowing you to set up again on a route they are using and harvest additional birds.

In the end, some hunters just prefer this method or like it as a change of pace from breaking up a flock and attempting to call the birds back into shotgun or bow range.

The tactic is especially useful where there’s lots of open country and ridges or perhaps fire towers you can glass from to pinpoint flocks and study their movement routines. Where do they roost? When do they go to water and where? Do they typically head east or west in the morning after flying down? The stalk and ambush method also works in woods settings as long as they are open enough to see birds at a distance and get ahead of them.

How To Hunt Fall Turkeys Without Breaking Up the Flock

First, through game department websites, county harvest figures, regional biologists, foresters, or other sources, locate an area with abundant birds and either public land or private land where hunting is allowed. Then get out and scout, or scout while you hunt if the season is already open.

The next step is optional, but once you’ve found some potential areas, you may want to up your odds by using trail cameras. Set them on field edges, forest meadows, crop edges, or anywhere you’ve seen birds or bird sign.

Catching turkeys on cameras can tell you where the turkeys are traveling and when they passed through, with a good chance they might repeat that route. Patterns are what you’re after. But unlike deer, which may follow somewhat similar routes each day, turkey flocks often have longer-running travel circuits. Sometimes several days may pass before they return to an area. Keep that in mind when studying trail camera images and planning your hunt.

Besides setting trailcams and glassing from high areas, you can also locate turkeys with the traditional fall approach—lots of walking. Hike along logging roads or ridges, and sneak up to the crest to peer down into depressions and hollows. Once you locate birds, find the best way to circle ahead and set up—a hunting app like onX can help with this. If the birds are heading your way, simply hunker back against the nearest large tree or shrub and wait for them to come into range.

2) The Best Habitat for Fall Turkeys

Also try to locate streams, spring seeps, small ponds, or other water holes. Turkeys need water every day. They get some of it from dew and puddles, but they’ll often visit a water hole, tank, stream, or pond once a day. Find these areas and you can either set up a blind and hunt near them or use the sign to learn which way they are coming from and heading towards after they drink.

Acorns are at the top of the menu for turkeys in the fall in many areas, but other hard and soft mast is also consumed.  Favored turkey foods include wild grapes, chufa, wheat, corn, oats, greenbrier, persimmon, clover, hawthorn, mountain ash, berries, and insects such as beetles, grasshoppers, crickets, and grubs. If one food is being hit hard, setting up on it may lead to a quick and successful hunt. Get in before dawn and wait.

Search for indications that turkeys are using the food including feathers, tracks, and scuffed up leaves. Then try to discover patterns to the area’s turkey movements. Determine where the birds roost, water, and head out to feed in the morning. Find out where they loaf and dust their feathers during midday. With this knowledge, you can often pinpoint where to intercept them.

Search for droppings, feathers, dusting areas, and scratch marks in the leaves. You can tell which way the birds are going by the direction the leaves are piled. A turkey rakes leaves towards itself as it searches for food. This means they will be piled up in the direction they are coming from. The opposite direction is where they are going.

Make sure the sign is fresh. Turkeys move so far in a day, generally several miles, that finding old sign doesn’t mean much. Focus on areas where the “scratchings” look fresh with the ground moist where the birds have raked away the leaves. Search for droppings that are shiny or wet looking rather than dried out and faded.

5) Use Your Ears When Scouting for Fall Turkeys

Make sure you use your ears as much as your eyes when hunting and scouting. Pause occasionally and listen. Turkey flocks feeding through the woods make a lot of noise. Besides occasional clucking and purring, you might hear leaves scuffling or wings whooshing as one bird tells another to back off.

Roosting birds can be a valuable strategy for fall hunters. Get out late in the day, just before sunset, preferably on a ridge or spot where you can hear birds from a large area. About 30 minutes before sunset, start listening for the whooshing wings and snapping branches of turkeys flying up to roost, or soft calls they make as they assemble for the night. Pinpoint this spot and be positioned close by the next morning right at daylight.

If you’ve patterned a flock well, the final approach may involve simply picking a good spot along their expected travel route and waiting. If you are still-hunting through wooded habitat and come upon birds, make a quick analysis of where they are headed, and what terrain features will allow you to circle ahead and intercept them. This is when the adrenaline kicks in as you stalk down a ravine or behind a side spur ridge to get ahead, much like anticipating where a mature bull elk or boss pronghorn is going and stalking to intercept it.

Does it match the thrill of busting up a fall flock and calling the birds back? That’s for you to decide. I plan to use both tactics, deciding on one or the other depending on what the habitat and hunting situation calls for, or maybe just my mood on any given day.