The 5 Most Legendary Waterfowl Destinations in America

Got an empty bucket list you’re looking to fill? Pencil in a few of these duck hunting hotspots 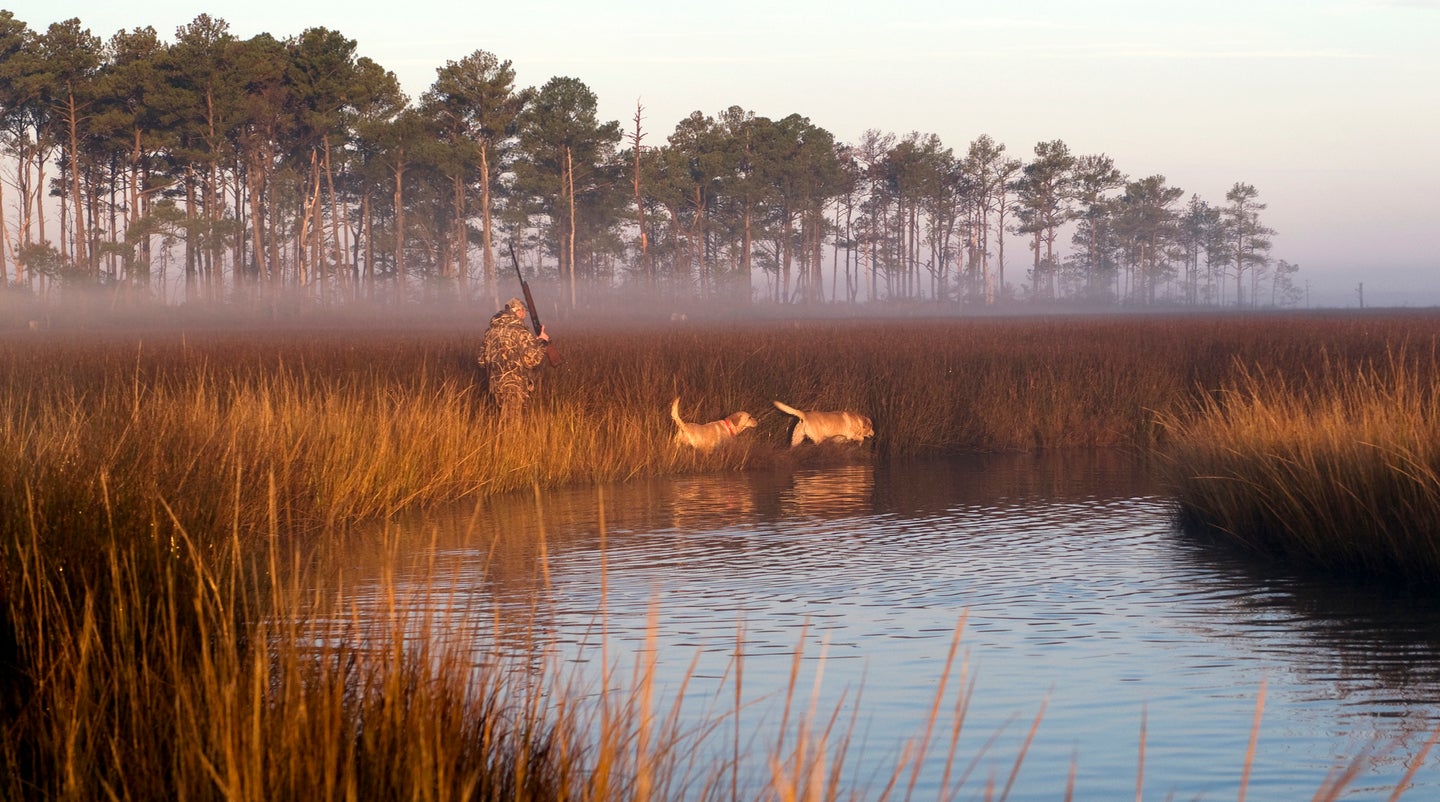 The Chesapeake is where American waterfowling got started. Jay Fleming via Getty Images
SHARE

This year marks my 50th season afield as a duck hunter. It’s been half a century since a too-little kid wearing too-big clothes and an Elmer Fudd ear-flap hat killed his first duck—a one-legged hen mallard—with his Dad’s 16-gauge shotgun. Today, and any given day, I’d struggle with finding my way to the grocery store. But I could take you back to the spot I was standing in Bob Wolfe’s beaver swamp the afternoon that ill-fated Suzie ran afoul of a 1-⅛-ounce load of lead #5s.

In years since, I’ve been blessed to hunt waterfowl in some legendary places. Most had lots of ducks. Others were just cool for any number of reasons. But what makes a duck hole legendary? How does it earn that title? Is it time? Numbers? Aesthetics? Reputation?

“I think it’s a combination of things,” says my friend Matthew Cagle, owner of Rig ‘Em Right Waterfowl. “It’s the lore surrounding a place passed down by the old-timers. And it’s not always a spot with the best hunting, but rather a place that people have talked, and talked, and talked about.” Legendary, might mean the opportunity to tag a bucket list bird—a drake canvasback, a cinnamon teal, or an adult tundra swan. Or it may involve the scenery, unique challenges, or famous waterfowlers who have walked that dirt in the past.

The five waterfowl hotspots profiled here are my top five, and many would argue, are at least in every waterfowler’s top 10. I’ve hunted all of them, with the unfortunate exception of the famed Chesapeake Bay. Some like Utah’s Great Salt Lake and the Columbia River, I’ve hunted many times. They’re places that for one reason or another, I simply can’t get enough of, and that, to me, qualifies them as legendary.

I shot my first drake redhead on the Columbia River, and my first black scoter, too. I watched a buddy shoot not one, but two drake Eurasian widgeon on the same morning on a small bay off the Lower River. It was a monumental day to say the least.

There is an almost infinite number of little islands and meandering sloughs, along with shallow bays, open water, tidal marshes, and freshwater streams on the Columbia. If it’s a style of hunting you’re looking for, there’s an awfully good chance you’ll find it there.

When it comes to species, the Columbia River is all about variety. On any given morning on the Lower River—and by ‘Lower River,’ I’m talking roughly from the Astoria Bridge upstream to River Mile 25—it’s possible to take a mixed bag of puddlers, divers, and sea ducks, along with any of seven subspecies of Canada geese. (NOTE: you’re only allowed to hunt six subspecies, Duskies are still a no-no on both sides of the Columbia.) I’ve seen Eurasian green-wing teal, long-tailed ducks, Aleutian Canadas, and even heard tell of the occasional wayward Emperor goose.  I’m not saying you’ll get this mix of species all in a day. But if you’re destined to put an oddball on the wall, the Columbia River might just be your go-to.

Oh, and just north of The Columbia Bar, Willapa Bay offers a limited black brant season in January, dependent upon aerial surveys and population estimates. David Hagerbaumer hunted brant there; Worth Mathewson, too. And if you don’t recognize those names, maybe you should try deer hunting.

Sean Mann has hunted the Chesapeake for more than five decades now. He grew up on the Delmarva Peninsula. It’s where he cut his teeth in the outfitting business; where he built his first goose call, the Eastern Shoreman; and where he grew his reputation among the Who’s Who of waterfowl call makers. It’s also where he won the World Goose Calling Championship (1985) and 10 years later, the coveted Champion of Champions title. Mann knows waterfowling and had this to say about the Chesapeake.

“Why does the Chesapeake Bay qualify as ‘legendary?” he says. “Because I said so. Kidding aside, in the grand scheme of things, the Chesapeake Bay is the birthplace of American waterfowling. The Europeans landed here first. They didn’t land in the Mississippi Flyway or the Pacific Flyway.

“This is where subsistence and market hunting began. In many ways, the Chesapeake is also the reason for all the conservation programs we have today. So it’s the birthplace, it’s part of the downfall, and it brought about the conservation measures that have kept many types of game, not just waterfowl, in the public focus and continuing to thrive today.”

Thanks to those conservation measures you can still hunt an array of ‘fowl on the Chesapeake, including Canada geese, white geese, canvasbacks, redheads, scaup, goldeneye, bufflehead, pintails, widgeon and a variety of sea ducks like scoters, long-tailed ducks, and Atlantic brant.

Beaver Dam Lake, or simply Beaver Dam, is legendary among waterfowlers because Nash Buckingham made it famous. Buckingham (1880-1971) spent much of his adult life as a prolific outdoor writer, book author, and conservationist. He was one of the most outspoken proponents of the Migratory Bird Treaty, a measure very much in place today. But first and foremost, Buckingham, accompanied by his equally famous 12-bore Fox double, Bo Whoop, was a duck hunter. And Beaver Dam was one of his favorite stomping grounds. He hunted there, wrote about it, and spent time with friends among the cypress.

Years ago, I had the opportunity to sit a blind on Beaver Dam as a guest of Mike Boyd, and his son, Lamar, owners of Beaver Dam Hunting Services. I was huntng with Tommy Akin, one of the finest gentlemen I’ve ever had the pleasure of meeting. The morning started off foggy and quiet before bat-like wood ducks flittered past the blind followed by grey ducks and mallards.

It was a classic hunt with canvas coats, wooden calls, and my father’s 1952 Winchester Model 24 16 gauge. That evening, we had supper at the Blue and White Restaurant in Tunica; perhaps at the same table Buckingham and his friend, Dr. William “Chubby” Andrews, sat so many years ago. At Beaver Dam, duck hunting history all around you—in the cypress, on the dark water, riding the wings of the grey ducks and the mallards circling overhead.

I’ve seen it on Pool 9. My wife, sharing a two-man layout boat with me, has seen it, too: Two hundred thousand canvasbacks. Maybe more. The exact number doesn’t matter. To us, it appeared to be every ‘can on the planet and then some. Never mind we were flat on our backs surrounded by 150 hand-carved ‘can and redhead decoys. Never mind that our hosts were none other than Mark Rongers, the man behind the Mighty Layout Boys line of ‘fowling skiffs, and his brother, John—two of the most knowledgeable duck hunters out there, especially when it comes to hunting from a layout boat.

Pool 9 is a 36,000-acre block of incredible waterfowl habitat between Wisconsin and Iowa running some 31 miles from Lynxville, Wisconsin, upriver to Genoa. Officially included as part of the Upper Mississippi River National Wildlife and Fish Refuge, Pool 9 is like nothing you’ve ever seen. There are open water expanses, shallow water embayments, a commercially active shipping channel, hundreds of islands big and small, and it’s loaded with an absolutely ridiculous number of ducks. The puddlers are well represented here—mallards, widgeon, gadwall, green-wing teal, even a handful of pintails. There are divers too, with redheads, bluebills, bufflehead, goldeneyes, and the occasional wayward scoter or long-tailed duck.

But it’s The King—the canvasback—that brings waterfowlers from far and wide to Pool 9. It starts, usually, in mid-October, with ‘can numbers swelling through Halloween and into November until there are a quarter million of them trading the waters and the sky above the Mississippi and her patchwork quilt of islands (which, by the way, make for great places to tuck in that big boat blind). It’s a spectacle well worth seeing, even if you don’t shoot one of these regal birds. But you will.

My guides put me in a layout boat behind a dozen snow-white decoys. They told me to holler, WWWOOOO!! at every passing bird. Told me to take my time, look ‘em over, and choose an adult. And then they motored away to hide in the tules. What they didn’t tell me was that after that huge white bird hit the surface with a splash—my first tundra swan—that I’d shake like an 8-year-old who just killed his first buck. And I did.

Tundra swans. Cinnamon teal. Green-wings. Handsome wall-worthy shovelers. Canvasbacks and redheads. Hell, even scoters and long-tailed ducks. They all pass through the Great Salt Lake, making it as legendary and unique a duck hunting location as you’ll find anywere, coast to coast. Hop an airboat and ride out into the center where the water is six inches deep. Surround your a coffin blind with 400, 500 or even 600 black duck-shaped silhouettes. Hide the airboat in plain sight a couple hundred yards away, and then watch more green-wings and northern shovelers than you thought existed fly into your spread.

Read Next: The Best Waterfowl Shotguns of 2022

You can hunt Divers on the Bear River Migratory Bird Refuge or Puddlers and swans at Farmington Bay from a traditional layout boat. There’s history, too. Duck hunting became popular on and around the Great Salt Lake during the late 1800s. The first Utah duck club, the Salt Lake Sportsman’s Club, was founded in 1884; and the prestigious Bear River Club was founded in 1901 and sold by its original owner, Vinson Davis, for the sum of $6,000.

But, sadly, there’s a dark side to the Great Salt Lake—she’s shrinking rapidly. In the late 1980s, the Great Salt Lake covered some 3,300 square miles; today, it’s fewer than 1,000. This translates into less water for people, agriculture, waterfowlers, and for wildlife in general. Climate change and high demand are where the fingers are being pointed, but the Great Salt Lake’s story is a long story; longer, perhaps, than her hunting history, which, with luck, will continue well into the future.