Garrett and Robbie Ammons took Booner-class velvet bucks only hours apart on opening day. If that weren't enough, the bucks' scores were only 2 inches apart 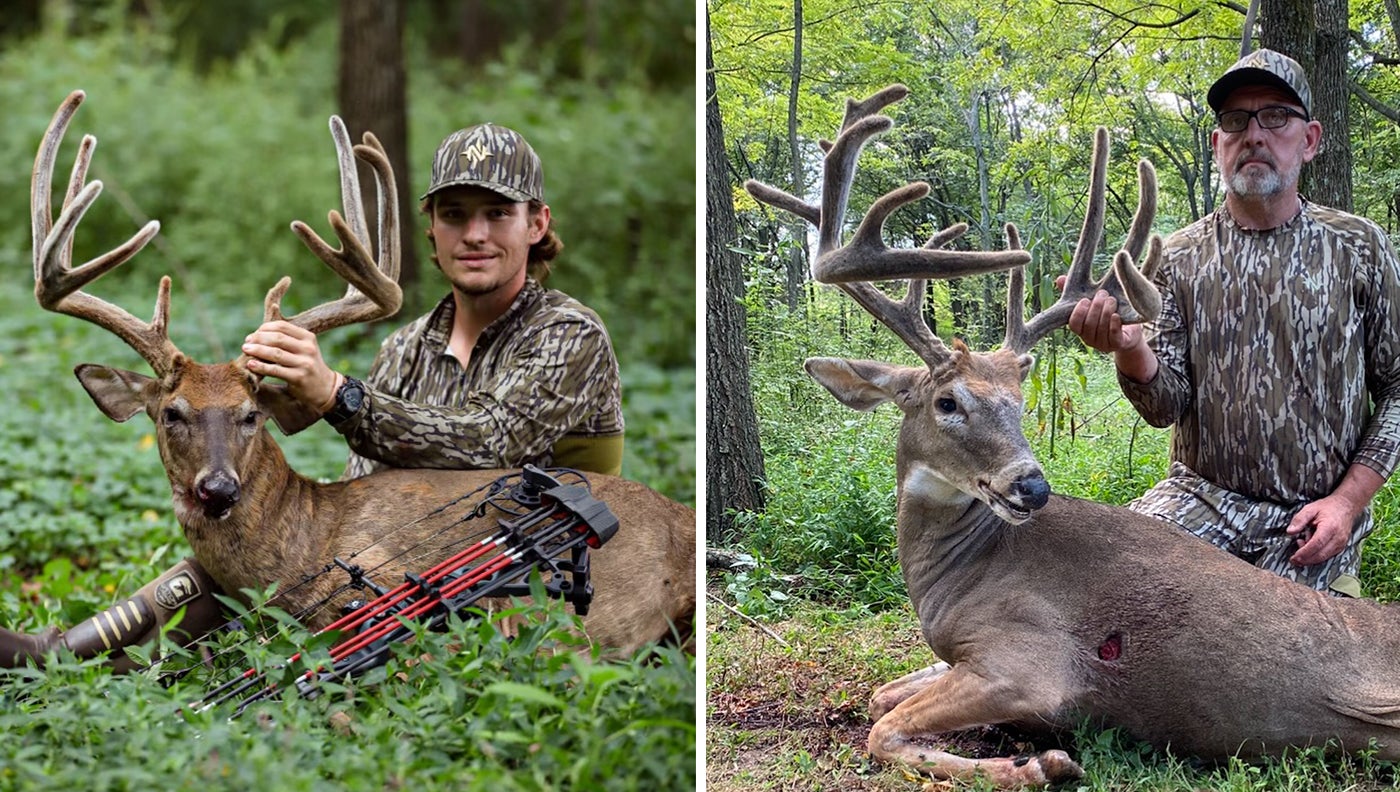 Tagging a nice velvet whitetail during the opening week of archery season is no small feat, and taking a gross Booner is a whole other level. So, the odds of a father-son duo each accomplishing that feat, on the same opening day, must be somewhere close to zero. Yet Robbie and Garrett Ammons of Hardin County, Kentucky, did exactly that on September 3rd.

And it was no lightning strike. These guys know what they’re doing. In 2020, we profiled a 12-point giant killed by Garrett on the Fort Knox military installation. And Robbie, Garrett’s dad, is a veteran bowhunter with a wall full of monster bucks—including a pair of 200-inchers. In short, if you’re a big Kentucky whitetail, you don’t want one of these men chasing you. But even this father-son teams admits that the opening day of the 2022 Bluegrass State bowhunt was something special.

Robbie kicked off the amazing opener by tagging a buck he knew well. “Dad had a 4-year history with his buck,” Garrett tells F&S. “Three years ago we knew he would be a good deer, and we were lucky to find one side of his sheds that spring. The next year, we had a bunch of pics of him, but he was largely nocturnal and difficult to hunt. That spring, we found both of his sheds; they scored 167 inches with a 16-inch spread credit. The year after that, the crop rotation switched to corn and he completely disappeared. We know the bucks like that farm better when it’s in beans, but we were mystified to not get any pics at all, and we ran cameras there from June through January. We were certain he was dead.”

This summer, however, with the farm back in beans, Robbie was glassing the area when he spotted a great buck with the same frame and kickers as they one they assumed was no more. They weren’t sure if it was the same buck at first, but as summer progressed the deer blew up, getting bigger and bigger each week. “Dad had a camera out and got him right away, so we put one of this summer’s pics next to one from 2 years back, and the frame was identical, just more massive, so we knew it was the same buck,” says Garrett. Although they were getting plenty of pictures of the buck, when August came the daylight images were really dropping. “But then Dad remembered a spot where he’d had daylight pics in the morning two years before. So he slipped in there, and sure enough, five of the next seven days. the camera caught the buck sneaking back to his bed in the morning, all in daylight.”

Robbie was worried about bumping the buck off the beans on a morning hunt, but there was a logging road that went through the block of timber where the buck bedded, and he felt he could use it to slip in quietly and unseen. So, on opening morning, he grabbed a climbing stand, went in early, and got set up. At about 8 a.m., Robbie looked up and there he was. “The buck walked in to just 24 yards,” Garrett says. “Dad made the shot and watched the buck tear off. After a short tracking job, Dad had a buck that he’d always dreamed of. He already has two over 200 inches, but he’s always wanted a great typical, and this was it.” In addition to great mass, the buck had a 4½-inch kicker off his G2. Both G2s were 12 inches long and the G3s were 11. The buck grossed 185-4/8 inches.

Garrett’s turn came only a few hours later. “I had a bachelor party for one of my buddies Friday night that rolled into Saturday morning, and it was still going when I left,” he laughs. “But my buddy knows how I love to bowhunt deer and that I had to go get after this buck.” The deer was one Garrett had only found a few months earlier but one he immediately knew was worth pursuing. “This was on a different farm than the one dad hunted. We always put out cameras and some corn (legal in Kentucky) and try to get an idea of the number and quality of bucks on a property. I got one pic of this buck on the afternoon of July 24, when he fed for about 15 minutes and left. And then he completely disappeared. I kept cams out and glassed fields, but I couldn’t find him.”

Eventually Garrett went to the opposite side of the farm, where a cornfield butted up to the timber, next to a creek bottom. “I found some good sign on a creek crossing, set the camera up, and he was the first deer to walk in front of it. Even better, there were very few days when he didn’t show up, so I knew I was looking at the area where he lived. There’s a really good glassing spot about 200 yards off the creek bottom, and I went there eight evenings to get him in the spotting scope or binoculars; he showed up six of those times.” Garrett never had any trouble identifying the buck because he was not only big, but his velvet was white. So much so, that Garrett worried it might mean the deer would shed his velvet early, before the season started. “Not only was I really hoping to get him in velvet, but I know a lot of bucks get funky right after velvet shed, and I was afraid he’d disappear again.”

With the season fast approaching, Garrett kept glassing the buck in the evenings. “From Sunday through Wednesday, the week before the opener, I saw him every night,” he says. “Three times he came out of the timber and walked along the edge of the cornfield, but the other two nights he came out of the corn. Either way, I knew I needed to be on the edge of that field on opening night.” In the late afternoon, after getting home from the bachelor party, Garrett gathered his gear and headed to the spot with a climbing stand and his bow. “Right at prime time, I had a doe, a scrub buck, and a small 8-point came out of the woods and walk by me. I was watching them, making sure none of them was aware of me, when I heard another deer coming. I looked into the timber, and there was that white velvet rack, heading my way.”

Just as his father’s buck had that morning, Garrett’s buck walked within easy bow range. “I just settled the pin on his ribcage and took the shot,” he says. “The buck tore off and, while I didn’t hear him go down, I knew he was in trouble. I called my dad right away, and he hurried out to the farm with the quad.” After another short tracking job, they were standing over a buck that was even bigger than they’d thought. “From the pics and my observations, we figured he might be in the mid- to high 170s, but my buck scored just a touch under dad’s, grossing 183-4/8.

Garrett, a pro-staffer for PSE, Mossy Oak, and Nomad Outdoors, has had some tremendous success for a 23-year-old hunter. “I was lucky enough to kill my first deer when I was only 5 years old,” he says. “But everything I know about deer hunting, I learned from my dad; he has a million tricks up his sleeve, and he’s always figuring out some new way to get on a big deer that amazes me. We’ve had tons of hunting memories over the years, but when we stood over my buck, enjoying a quiet celebration, I think we both knew this day would be hard to top.”