The unexpected hunt, which took place an hour before the ceremony, gives new meaning to the term "shotgun wedding" 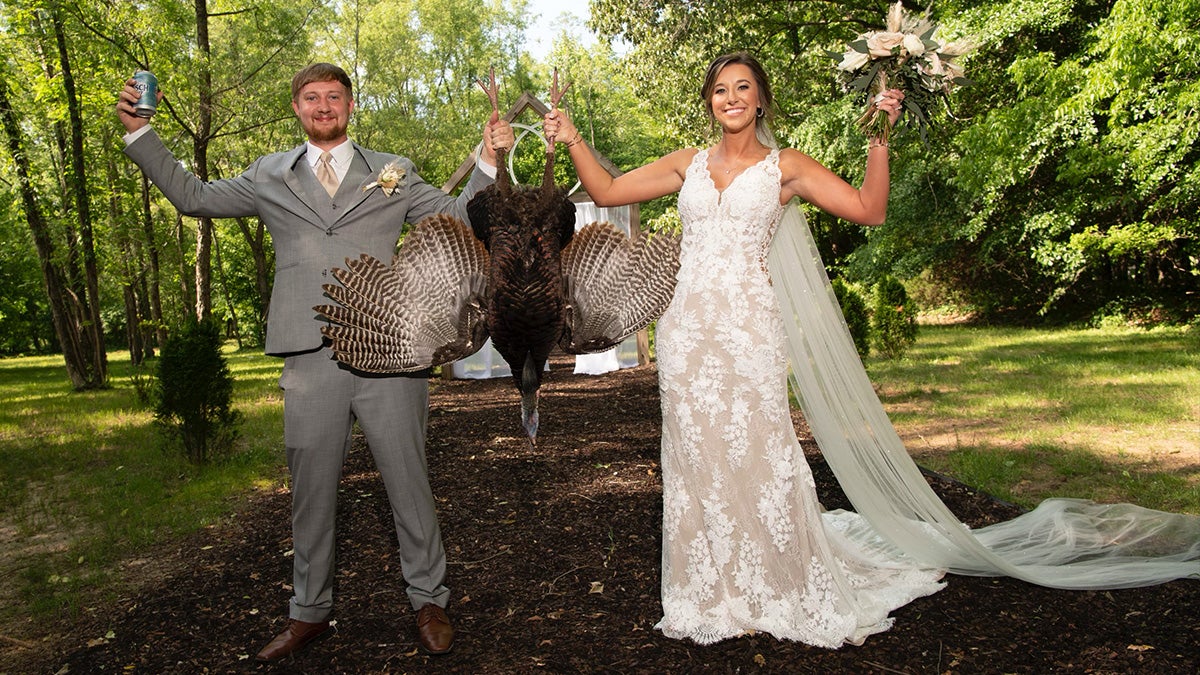 A noisy gobbler that interrupted a Tennessee couple’s wedding photos on the final weekend of the wild turkey season earned an invitation to the celebration—in the form of yelps and clucks. The groom and several groomsmen teamed up to call the bird in while one of the guests dropped it with a 15-yard shot.

Lauren and Cody Droke were posing for photographs an hour before their May 14 wedding at Cogan’s Farm, a 150-acre event venue near Henderson, Tennessee, when a sound from the woods caught their attention.

“I heard a hoot owl call, and, of course, being a turkey hunter, I immediately had my ears tuned to see if anything followed,” Cody tells F&S. “Sure enough, I thought I heard a faint gobble.”

It was the penultimate day of turkey season, and Cody still hadn’t filled his tag. “I was like, Wow, I must be hearing things. But the owl hooted again, and I could hear the gobble a little clearer this time,” he says. “I asked Lauren, ‘Do you hear that turkey?’”

“I could hear the owl, but I couldn’t hear the turkey,” Lauren says. “I was like, ‘I don’t know what you’re talking about.’” Growing up, she had accompanied her father on some turkey hunts. In the 10 years that she and Cody have been together, she has gone along on hunts with him, too, though she’s not a big hunter herself.

So how did a couple who cherish their time in the spring woods come to have a wedding planned for the last weekend of turkey season? “I’d normally be tagged out by then, so I thought it would be fine,” Cody says, laughing. As it happened, he called in a couple of turkeys this spring. A friend shot one, but Cody missed his. So here he was, on the next-to-last day of the season, with an unfilled tag, a wedding suit on, and a hot gobbler lighting up the woods.

As they continued posing for wedding photographer Jud Davis, Cody kept listening. “It was 4:00 p.m. and that turkey was fired up. He was looking for something. My brother, Justin, and the rest of my crew got there, and I was telling him, ‘Dude, there’s a turkey hammering over there.’ And he’s like, ‘You’re lying. I highly doubt it.’”

Justin hooted and the turkey answered. “At this point, we were thinking, Hmmm, all right. We’ll give it a little call and see what happens,” says Cody, who notes that his brother Justin has won a few calling competitions and called to the bird using just his mouth. By then Lauren was taking photos nearby with her bridesmaids. Every time someone in the bridal party laughed, the turkey gobbled.

“There’s seven of us guys standing in the middle of this field, in suits, taking turns calling,” Cody says with a chuckle. “And I’m like, ‘This is ridiculous. This is never gonna work.’ But at some point, we could tell he was getting closer. And of course, the girls were yelling at us to come to take pictures. It was almost wedding time, and we were like, ‘Who’s got a gun in their truck?”

As tempting as it might have been to go after the bird himself, Cody thought better of it and stayed at the photo shoot. His buddy Will Wallace fetched his shotgun and asked the Cogan’s Farm proprietor if he could go after the bird. With permission granted, he set up in a tree line about 100 yards from where the groomsmen were calling.

“One bird actually came out and spooked. There were 30 of us out there by now, taking pictures, and we were like, ‘Oh, man, it’s over,” Cody recalls. “All of a sudden, we heard another gobble. There were two birds, but the second bird got hung up and wouldn’t come out. My brother looped around about 200 yards and got in front of that bird and started calling. About two minutes later, the turkey popped up 15 yards in front of Will, and it was over.”

The whole thing, from the first faint gobble to the shot, took only 30 minutes, and the groom’s party had ample time to get their photographs taken with their new prize before the wedding began.

Lauren was a good sport about it, too. “I thought it was the coolest thing ever,” she says. “When he told me they were going to try to kill it, I said, ‘That would be a really cool wedding picture.’ So after they shot it, I was like, ‘Bring me that turkey! I want to take my photo with it.’

“It was such a big part of the day because everyone cheered when the shot went off, and they got the turkey,” she says. “The whole wedding party was yelling, and it was so much fun. I know when I think back on my wedding day, when I’m old and I can’t remember anything, I’ll still remember that turkey.”