How To Hunt Diver Ducks From Dry Land

You don't need a big boat to have a good diver hunt, you just need to pick the right spot and bring a few decoys 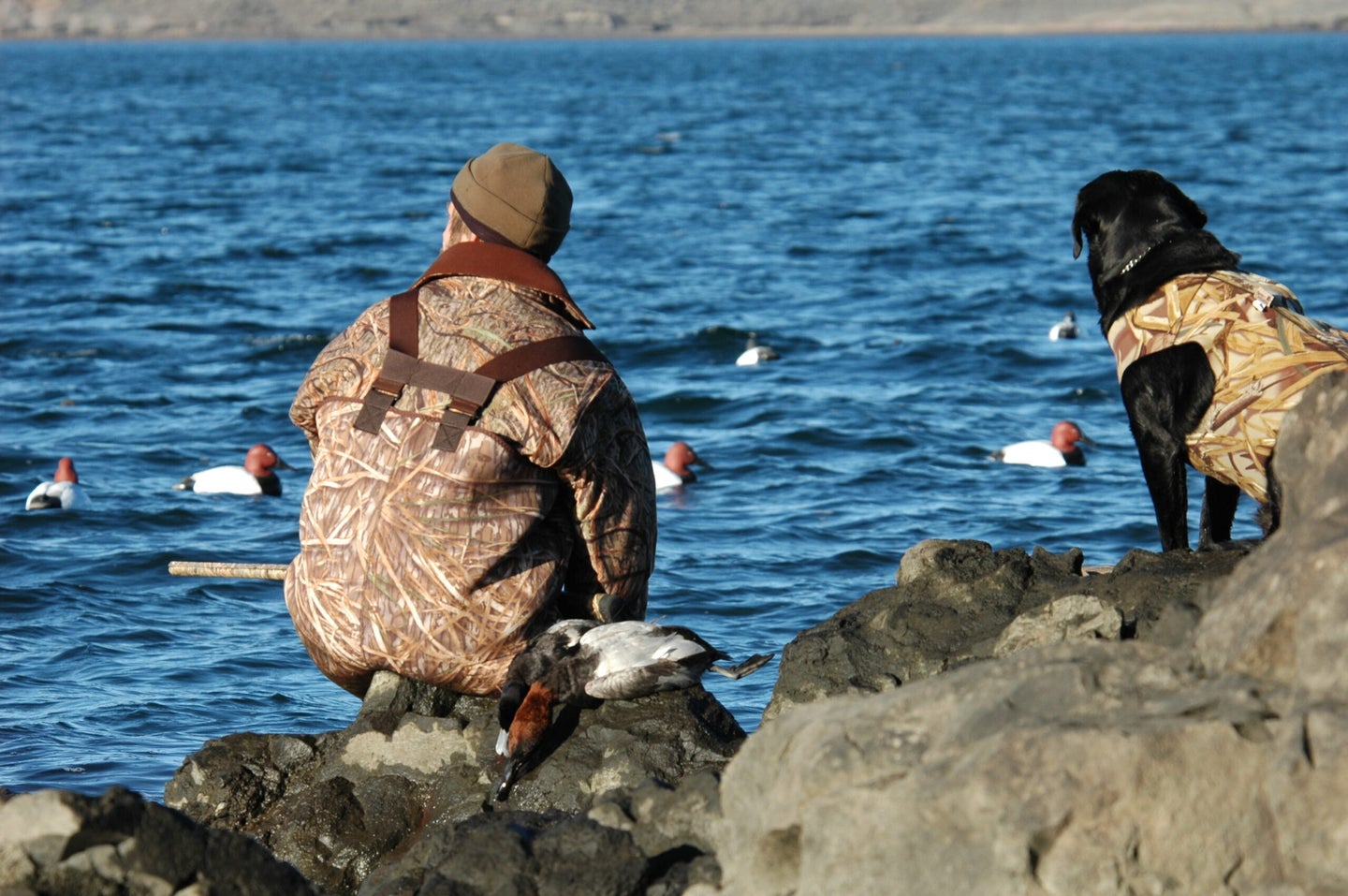 I was raised a puddle duck hunter by a puddle duck man. Never once during my formative ‘fowling years back in the early 1970s did we hunt divers. We talked about canvasbacks from time to time; spoke of them as if they were some mythical thing. They were a bucket-list bird for me and my father, even before the phrase ‘bucket list’ became cool.

That all changed, though, as I got older and discovered something other than a steady diet of mallards, blacks, wood ducks, and teal. I became fascinated by divers. Bluebills on the Columbia River, redheads on the Great Salt Lake marshes, goldeneyes on Utah’s legendary Bear River, canvasbacks on the Mississippi, and Buffleheads… well, buffleheads a little bit of everywhere.

My introduction to divers back then, as it continues into today, was almost 100 percent boat-based. Our transportation, tendering, decoy placement, bird retrieval, hide, and return trip all took place from a boat. Why? Because to get to where the divers dwell, one must go by boat.

Or do you? It is possible to leave the boat behind and shoot divers with your feet firmly planted on dry ground—or at the most, damp ground. But gunning divers from terra firma isn’t without its own set of considerations. Still, if it’s something you have a mind to do, it can be done. Here’s how.

How to Find Places To Hunt Diver Ducks From Dry Land

Let me begin by saying the vast majority of my dry-land diver hunting has focused on scaup (bluebells). However, I have had the opportunity to hunt ‘cans, redheads, goldeneyes, buffleheads, mergansers, and a host of sea ducks from a shore-based blind. It just depends on where that shore is in relation to the water.

I look for points of land that, while still attached to the shore, push me closer to open water where the birds feel comfortable. For the most part, divers aren’t fond of flying over dry ground. But any geographic feature, like a long point of land that juts into the water or the skinny part of an island, certainly holds potential. Tides that fill and empty from tributaries can also be played to your benefit. With an incoming flood tide, birds will move off of large bodies of water and push upriver. As it falls they’ll return to open water. Find a place along that travel route, and you’re in business.

As is the case with all waterfowl hunting, dry-land diver success depends first and foremost on scouting. Look for concentrations of birds, flight lines, or geographic features—be it on foot with binoculars or via Google Earth—which put you closer to the open water that divers prefer. Don’t overlook near-shore resting or holding waters, either. Divers, especially bluebills and buffleheads, will come surprisingly close to shore as they work to get away from wind, waves, and current. Or maybe it’s a shallow water food source—like fingernail clams here in the Columbia—30 yards off the sand. Keep tabs on how divers use the landscape around where you hunt and you’ll find places to set up for them.

The Right Kinds Of Land-Based Blinds For Diver Hunting

At the risk of infuriating dedicated diver hunters, I’ll go out on a limb and say you’ll never shoot bluebills, canvasbacks, or goldeneyes while the birds are en route to a Mensa meeting. Dumb? They’re not dumb; they’re just not brilliant when it comes to recognizing danger in the form of waterfowlers.

Dry-land diver blinds really need not be elaborate. They just need to be located within an acceptable shooting distance of your decoys. More often than not, I hide either in something Mother Nature has provided, like a pile of driftwood, or I’ve taken a few minutes to cobble something together using items nearby. Currently, I hunt a tributary to Willapa Bay in Washington state and use a derelict wooden boat for a blind. She has plenty of room for two shooters, and the birds are used to it being there. You couldn’t ask for more.

At times, a blind isn’t necessary; rather, appropriate camouflage and self-discipline. Other times I’ll hang a 6- by 12-foot section of anti-aircraft (AA) netting on two 6-foot tomato stakes, and sit behind that on a short folding stool. Occasionally, I’ve used an AquaPod as an improvised layout blind, beaching it, lying prone, and staying still. The Avery Power Hunter layout blind is as formal as I get for divers, and the Field Khaki version blends perfectly with wet sand.

How to Set Diver Decoys Without a Big Boat

There are a handful of places I can arrange a shore-based diver spread on my feet—that is, the water depth and bottom composition allow me to wade and set both long lines and single-rigged decoys. More often, though, I use an AquaPod to set my decoys, as the skiff makes the task much easier, not to mention safer.

As for the spread itself, the number of decoys, along with their arrangement, depends on where I’m hunting. For numbers, I’m limited to what I can either carry on my back or pack into an AquaPod, the latter maxing out at five, perhaps six dozen total decoys plus lines and anchors. It’s a good amount of gear, but it isn’t the seven to 10 dozen decoys that boat-based diver hunters will haul out.

The Best Decoys To Use For Hunting Diver Ducks

For the most part, divers aren’t species-specific. A rig of bluebill decoys or bluebills with a few redheads and a handful of buffleheads will attract a host of divers. The only possible exceptions to this are goldeneyes and canvasbacks, which tend to be a bit more partial to their own kind.

Some diver hunters will set a spread mixed with drakes and hens at random. I run 99 percent drakes. Many drake divers—‘bills, ‘cans, buffleheads, and goldeneyes in particular—have more white in their plumage, which helps with long-range visibility, especially in the dreary low-light conditions associated with top-notch diver hunting. Have both drakes and hens? I’d suggest running them both if numbers are what you want. Can you be picky and rig only drakes? Run drakes.

How to Rig Diver Decoys

A long line, when it applies to diver hunting, is a single often ¼-inch rope (line) anchored at one or, commonly, both ends, and affixed with multiple individually-rigged decoys. This method of setting a spread allows a large number of diver decoys to be deployed and retrieved quickly.

On a long line, each decoy is tied with what’s known as a dropper, which is usually a length of heavy tarred nylon—or Tanglefree decoy cord—with a 5-inch stainless steel quick-release clip (gang-rig or halibut) on the tag end. Droppers are roughly 35 to 40 inches long, which is long enough for a dog to swim perpendicular to the long lines without becoming entangled.

Anchors take many forms. In reasonably calm water, I’ll use a 3-pound folding grapple anchor at both ends of a long line—or a grapple at the head (beginning) and a 3- to 5-pound window weight at the tail (end). In rough waters, I have a set of 10-pound plastic-coated mushroom-style anchors I’ll drop, fore and aft, to hold the line in place. Using a single anchor at the head of a long line is an exception to tradition; but, on the narrow tributary I often shoot, I’ll drop one 3-pound grapple at the head, clip 10 to 12 decoys, and leave the tail free. The current keeps the entire line straight.

Read Next: Bulk Up Your Diver Spread With Old Mallard Decoys

The Best Decoy Spreads For Hunting Diver Ducks From Land

There really is no right or wrong when it comes to setting a diver spread from shore. If I’m in an area that holds a variety of species, I’ll throw a random ‘blob,’ of individually-rigged drake bluebills directly in front of the blind. The blob mimics a frenzied knot of bluebills diving on an abundant food source. I’ll put 8 to 12 drake goldeneyes off to one side, and the same number of canvasbacks at the other. The distance between the bluebills and the other species is arbitrary, but 10 to 20 yards usually seems right.

A design I use often, and have found to work well, involves running two long lines, 10 to 15 feet apart from each other, with a dozen decoys each 20 to 30 yards downwind of the blind, and angled out. I’ll then run two more lines on the upwind side and the same distance from my hide, again with a dozen decoys each, angled slightly outward. I’ll then create a blob of 15 to 18 individually-rigged drake bluebills directly in front of the blind at 15 to 20 yards to simulate an active feed. Passing birds will typically follow the outermost lines into the center, where they often land at the edge of the blob. This spread features a lot of white from the drake bluebills and attracts quite a bit of attention. And as the sides are mirror images of one another, I don’t need to adjust the decoys if the wind shifts.