Geese on Ice: How to Hunt Honkers In Extremely Cold Weather

It doesn't matter if you're hunting cornfields or a half-frozen loafing pond, you'll need to adjust your strategy when hunting late-season geese 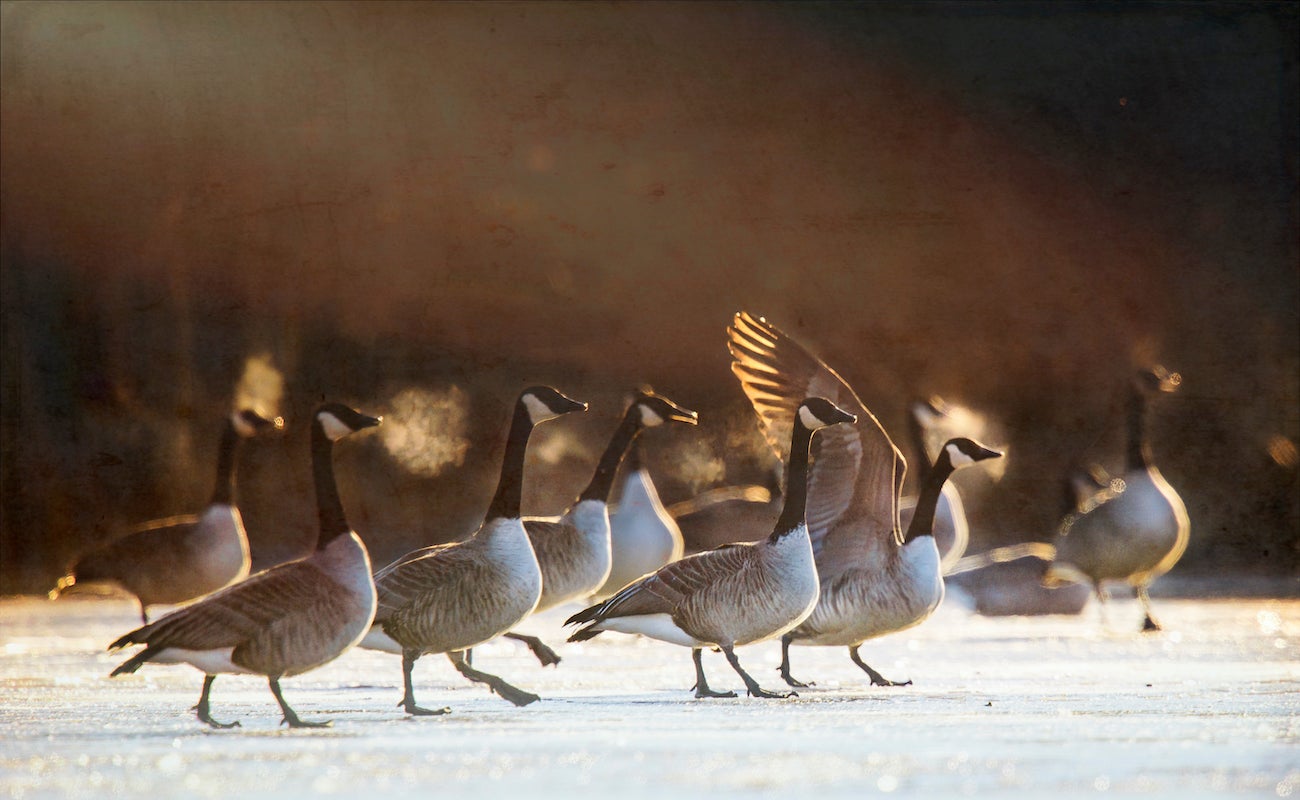 Some of the best gunning for Canada geese comes in December and January under bitterly cold conditions. During the height of winter, you can hunt cut cornfields and active feeds. However, you can also hunt geese on water, even when that water starts to freeze up. Both semi-frozen or frozen loafing ponds, of which there are many, as well as partially iced-over smaller rivers, can provide lights-out goose hunting when scouted and hunted right. Here’s how to do just that.

To hunt Canadas over ice, it’s best to begin by knowing how extreme cold affects these big birds. What do they do? How do they react? Where do they go? Forrest Carpenter knows about these things. Carpenter was born and raised on Colorado’s Front Range, and he’s is a man of many faces. He works with Dive Bomb Industries as a photographer, media relations/public relations representative, and last but certainly not least, as the lead pilot for the company’s small single-engine airplane. He also competes on the goose-calling circuit, winning the Junior World Goose Calling Championship in ’05, and has placed in the Top Ten in the World Duck Calling Championships. Bottom line, he knows his stuff.

Under such conditions, Carpenter suggests planning to hunt during the warmest part of the day instead of setting up well in advance of legal shooting time. “I’ve spent many mornings staring at my breath under a clear blue sky,” he says. “But very rarely have I had much success before my stomach started grumbling for lunch. If the temperatures are warm enough that the birds feel comfortable leaving the roost twice a day, then there’s opportunity to hunt fields both in the morning and in the afternoon, as well as mid-day loaf hunts over ice.”

How to Set Goose Decoys On Ice

It’s no mystery why geese are on the ice. They’re sitting, resting, or loafing. Typically, they’re not feeding. What this means for setting decoys is significant. Your spread should represent birds at rest. They should look calm and secure. You can have a couple standing here and there, but for the most part, your decoys should just be chillin’.

“On frozen ponds,” Carpenter says, “I prefer to set shell spreads, often with a high percentage of head-tucked sleepers. Ten to 20 percent of my spread will be in standing or upright poses, too—either full-bodies or silhouettes. These help with long-distance visibility.” Where open water is available in conjunction with ice, Carpenter tosses a handful of Canada floaters into the mix, although he does so with a bit of caution. “I’m careful to not completely cover the water, as it makes the birds’ preferred landing area harder to predict.”

How many decoys? I always try to match my spread numerically to the size of the flocks I’m hunting, or even a touch smaller. Carpenter agrees, saying “the size of my spread depends on the local birds, what they’re doing, and what subspecies I’m hunting.” For big Canadas, like those found in the West, I can get away with six to 18 full-bodies, though I’ve hunted over as few as two. For smaller geese, like lessers and cacklers, I’ll pull out all my Dive Bomb silhouettes and set what I have available, or roughly 20 dozen plus another 90 to 100 full-bodies. Little geese are a lot of work, even when hunting them on ice.

General theory calls for shells and full-bodies when hunting geese over hard water. Why? Because shells don’t need to be staked, and full-bodies, can stand on the ice with circular ring-style bases. But Carpenter makes it work with his silhouette decoys. “I’ve had success using silhouettes on ice, either by hammering the stakes into the ice or using homemade metal ring bases,” he says. He also says that silhouettes have a huge advantage over shells and full-bodies in the winter because their two-dimensional design doesn’t collect snow. “I truly feel you can have the same success hunting birds over two-dimensional decoys as you can over three-dimensional decoys about 95 percent of the time,” including over ice.

How to Call Geese in Cold Weather

As noted below, I’ve had some pretty interesting gear-related experiences while hunting big geese in extremely cold temperatures. Guns freeze, plastic decoys get brittle to the point that they shatter, I’ve gotten frostbite, and worst of all had to drink cold coffee.

I’ve also had issues with calls, and those who have hunted in the Upper Midwest in January know all about this. As air exits your lungs, your breath is warm. However, given it’s -20 Fahrenheit, it doesn’t stay that way for long. In fact, the condensation inside a short reed can freeze almost immediately, making your call sound like garbage.

“Cold will always affect things,” Carpenter says. “But your calls are among the most dramatically affected.” The materials your short reed is made of, he explains, contract at different rates. Mylar reeds, rubber O-rings, acrylics, polycarbonates, and, last but not least for you Old-School folks, wood are all affected by the cold differently. Thus, the perfectly tuned call of yesterday might not even break over properly on a cold day.

Carpenter advises keeping your calls inside your jacket when you’re not using them. “If you feel a need to keep a call handy, just in case you’re surprised by a bunch of geese, carry two calls and try to alternate between them every 15 minutes or so,” he says.

Sound also changes when the bottom drops out of the thermometer, and so should your calling. “On clear, cold days, sound will travel much farther,” Carpenter says. “I feel more confident calling at birds at longer distances. Though I keep in mind that under cold, extremely dense atmospheric conditions, the volume of my calling is transferred from Point A to Point B more efficiently, so I tone it down as the birds get closer.”

Here, Carpenter will let the decoys and the spread as a whole do what they’re designed to do: visually seal the deal. “I’ll only call if I need to center the birds to the blinds,” he says. “Live birds aren’t extremely talkative in super cold conditions, so this semi-silence replicates nature really well.”

It was the best of days. It was the worst of days. The good news was my wife, Julia Carol, and I were, without question, on The X. Every goose in Jones County, Iowa, wanted into our small decoy spread like it was the last safe haven on Planet Earth. Long shots were 15 yards, and most of the time, we had to wait for the birds to pump out to an acceptable distance. Yes, it was that good.

The bad news? Almost immediately, our semi-automatics went into single-shot mode due to the fact that the temperature was -25. Eventually, Julie’s 11-87 locked up tight, and my VersaMax soon followed. We still managed five of our six-bird limit before getting shut down, and we each learned a valuable lesson about extremely low temperatures and shotguns.

So, how do you keep your shotgun cycling smoothly in sub-zero conditions? First, it’s important to understand there will be days when nothing you do seems to make any difference, and your ‘fowling piece becomes little more than a wood-and-metal popsicle despite your best efforts. That being said, it’s what you do before taking your shotgun afield that often determines how she’ll function—or if she’ll function at all.

The first thing you want to do is strip your shotgun completely. And by completely, I mean down to the trigger group, bolt assembly, and even the magazine spring. Is addressing components such as the safety taking things just a little bit too far? Not at all.

Next, spray all of the parts thoroughly with a good degreaser in a well-ventilated environment. (I’m partial to Birchwood Casey’s aerosol Gun Scrubber.) Step three is to lubricate the gun.

There are two schools of thought for this. One says use nothing in the way of lubrication when gunning in extreme cold; rather, run the shotgun dry. The other, and the one to which I subscribe, is to lubricate the working parts, albeit lightly, with a low-temp-specific material, such as All-Weather High-Tech Grease from Shooter’s Choice, or a dry spray like Hoppe’s Dri-Lube. A graphite-based spray is another good choice. Regardless, use any lubricant sparingly, and you should be ready to go when those black feet drop and you pop out of your blind like a camo-clad jack-in-the-box.