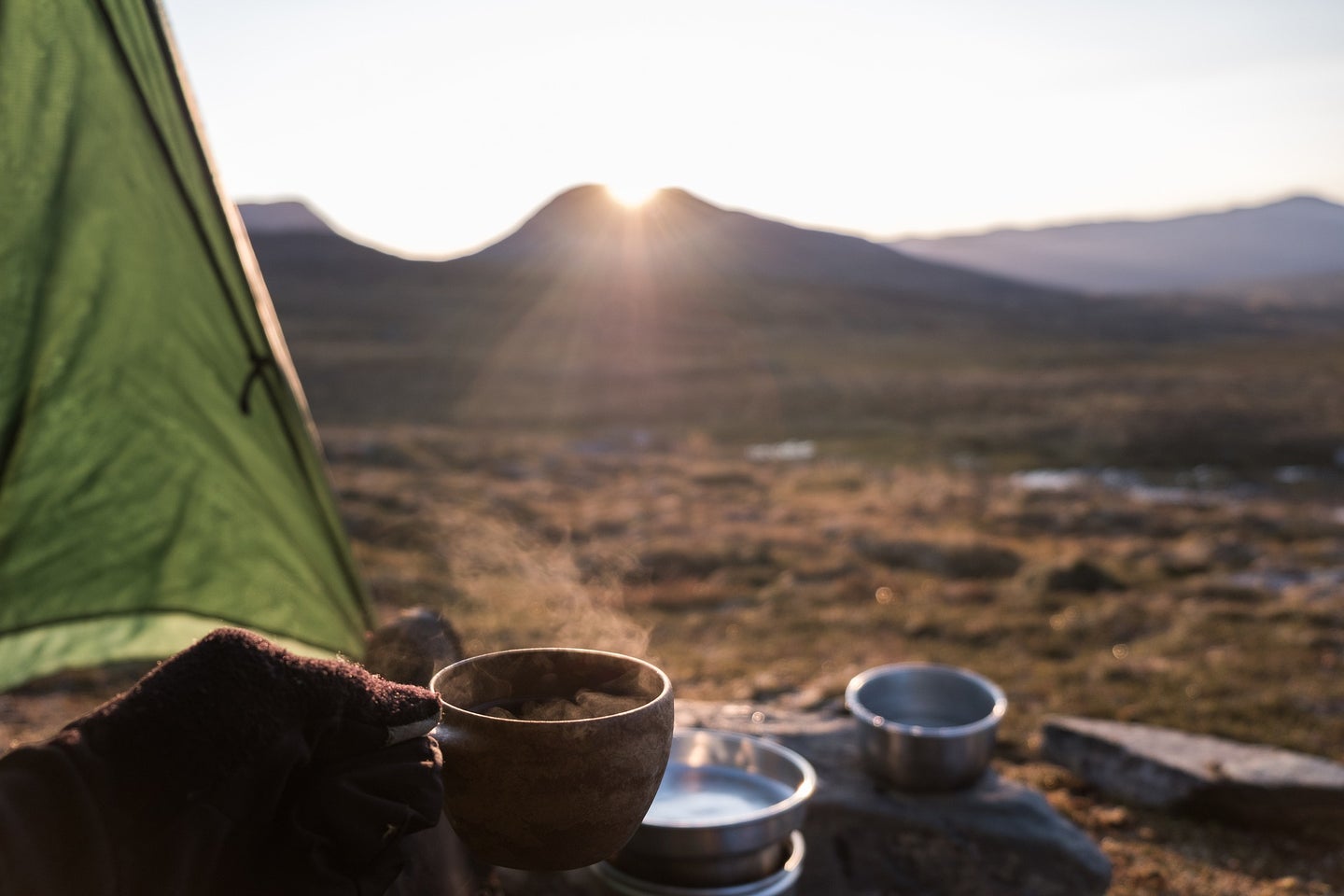 There is no outdoor topic more subjective, controversial—or homicidally charged at 5 A.M.—than how to make good camp coffee. Specifically, I’m talking about coffee brewed over a wood fire or camp stove in a plain, blackened pot, without benefit of percolators, drip baskets, or other devices. Just coffee made the old-fashioned, time-honored camp way.

The maddening thing is it seems so simple. It’s only two ingredients, after all: coffee and boiling water. But scratch the surface of camp coffee-making and you’ll find an arcane, bewildering science underneath, populated by outdoors people who take the business very, very seriously.

For one thing, there’s the raw material. Each type of coffee bean has its devoted following. Fanatics will argue about the merits of Hawaiian Kona over Sumatran Ankola with quite as much passion as they would the advantages of internal versus external frame packs. To them, the bean, the whole bean, and nothing but the bean is paramount. Most of us thermos drinkers, on the other hand, are vaguely aware there’s some difference between arabica and robusta, but on a cold, dark dawn it doesn’t matter much so long as it’s hot. However, these preferences can come to a boil quicker than the coffee if you don’t sort them out before you reach camp. To avoid outright mutiny, follow these rules.

Rule No. 1: Stick to Whole-Bean Coffee

Leave that vacuum-packed coffee on your supermarket shelves. Not only is it generally a cheaper blend of young and old beans that tends toward bitterness, but it’s preground. That convenience comes at a price. Once the seal’s broken, it will lose over 50 percent of its flavorful coffee oils within as little as 18 to 24 hours. After a few days in the bush, it’ll make a cup of hot, brown water, but not much else.

Buy whole-bean roast coffee. It smells heavenly and naturally preserves flavor and taste. Take it from the bag you bought it in and store in an airtight container, like a Nalgene plastic bottle. Don’t put it in a plastic baggie or a metal can with a plastic lid that isn’t airtight. Don’t refrigerate or stash it in a camp cooler, which can cause condensation and moisture that will permeate your carefully chosen beans with unwanted flavors (like hot dogs or fish). Unless, of course, you like café au chain pickerel.

Rule No. 2: Get the Right Roast

It’s the roasting that develops the more than 800 substances in a coffee bean—including its essential flavor and aroma-producing oils. Roasts range from light to medium brown (medium is the standard for most American coffees) to very dark Italian roasts and burnt, almost black, dark French roasts. Almost more than the bean, the roast will determine tartness, aroma, and body of any coffee you choose. If your camp mates are thermos drinkers, pick a medium roast. If they’re espresso fanciers, pick a darker roast. As a rule of thumb, the darker the roast, the stronger, fuller, and more robust the flavor.

Minutes before brewing, grind the beans up fine. The finer the grind, the more surface area (particles) and coffee oils are exposed to the water, releasing more aroma and flavor. However, too fine of a grind can make the brew bitter. If you don’t have a grinder, wrap the beans in a bandana and pulverize them with the butt of an axe or hatchet. This will produce a coarse grind that’ll take a bit more time to surrender its flavor, but more about that later.

Your carefully selected, roasted, stored, and ground beans can be ruined in the flick of a whitetail’s flag by a pot of bad water. Use spring water if you can get it. Well water can be full of untasty minerals, and a canteen of chlorinated tap water from home will taste just like that. If fresh, pure water isn’t available, bottled water is fine and certainly no harder than packing along a canteen of tap water. It will drastically improve the taste of the brew. So will cleaning the pot after each brewing.

Rule No. 5: Know Your Strength

How strong or mild individuals like their coffee is complex and personal. What’s more, it probably varies. In the morning, they may want an eye-opener; in the evening, they may want it gentler. Opinion here varies widely. Some say two level teaspoons of ground coffee per each six-ounce cup of water will do. Others say one heaping tablespoon per cup of water, with one extra tablespoon of coffee and one extra cup of water “for the pot.” Still others maintain you should fill the pot with about three pints of water, toss in two handfuls of ground coffee, and to hell with more precise measurement.

Generally speaking, I favor the two-teaspoons-per-six-ounce-cup ratio. It makes it very strong, the way I like it. Others don’t. Experiment here until you find the right strength to satisfy all hands. Believe me, your camp mates will provide plenty of feedback.

There are three time-tested ways to go:

Grind a blend of roast mocha java beans fine. You can usually find mocha java in the whole bean at your local supermarket. It’s a good, medium roast, middle-of-the-road coffee that should satisfy most of the camp. Put six teaspoonfuls of coffee into the pot and pour in three pints of cold water. Place on the fire or coals and bring to a rolling boil. Remove immediately, set it alongside the fire, and let it steep for three minutes. Before pouring, add three to four tablespoons of cold water to settle the grounds (this works surprisingly well). This will make about six large mugs of very strong, chewy coffee. Taken black, it may be too strong for all but die-hard coffee drinkers.

The adherents of this method insist that boiling coffee with the water vaporizes the beans’ fragrant, flavorful oils, resulting in coffee that smells great but whose flavor has literally gone up with the steam. Adding the grind to boiling water, after it’s removed from the fire, supposedly preserves the coffee’s aroma and taste.

Grind your beans fine. Fill a two-quart coffee pot or kettle with fresh water, bring it to a rolling boil over the fire, and set it aside. Immediately toss two handfuls of ground coffee in the pot and stir. Then leave it alone and let it steep four minutes. Add a bit of cold water to settle the grounds.

This seems to produce a somewhat milder, clearer brew than the boil-it-all-at-once method. But it’s still brawny coffee. To tame it a bit, add two teaspoons of powdered cinnamon or a packet of instant cocoa mix to the pot. Those who like it black will like it more.

Grind some Colombian beans coarse—they’ll be labeled arabica in your supermarket. This coarse grind is in direct opposition, of course, to grind-it-fine camp coffee aficionados, who maintain a fine grind maximizes aroma and flavor and minimizes steeping time. But camp coffee-making is an exercise in contradictions.

Fill the pot or kettle with as many cups of water as you want cups of coffee. For each cup of water, stir in two heaping tablespoons of coarse grind. Then add one more cup of water and two tablespoons of coffee “for the pot.” Set on a bed of coals—not open flames—and slowly bring to a boil; the slower, the better. The instant it boils, remove it from the coals and let it steep five minutes. To clear the coffee and settle the grounds, pour in one cup of cold water. This will produce a rather hair-raising brew, which is just the jump start needed on a frosty Canadian morning.

If all else fails—when the wood’s wet, the propane’s gone, and the last bean’s vanished—there’s still one alternative. Called Night Nurse’s Nirvana, courtesy of Kathy in New Hampshire, it requires only a cup. The recipe is the simplest of all: yesterday’s coffee, cold and black. After all, even cold and black coffee is better than no coffee at all.