The Secret Life of a Bedded Buck

Bedded whitetails can rest, doze, and even slumber while remaining on alert. And, yes, they can sleep with their eyes open 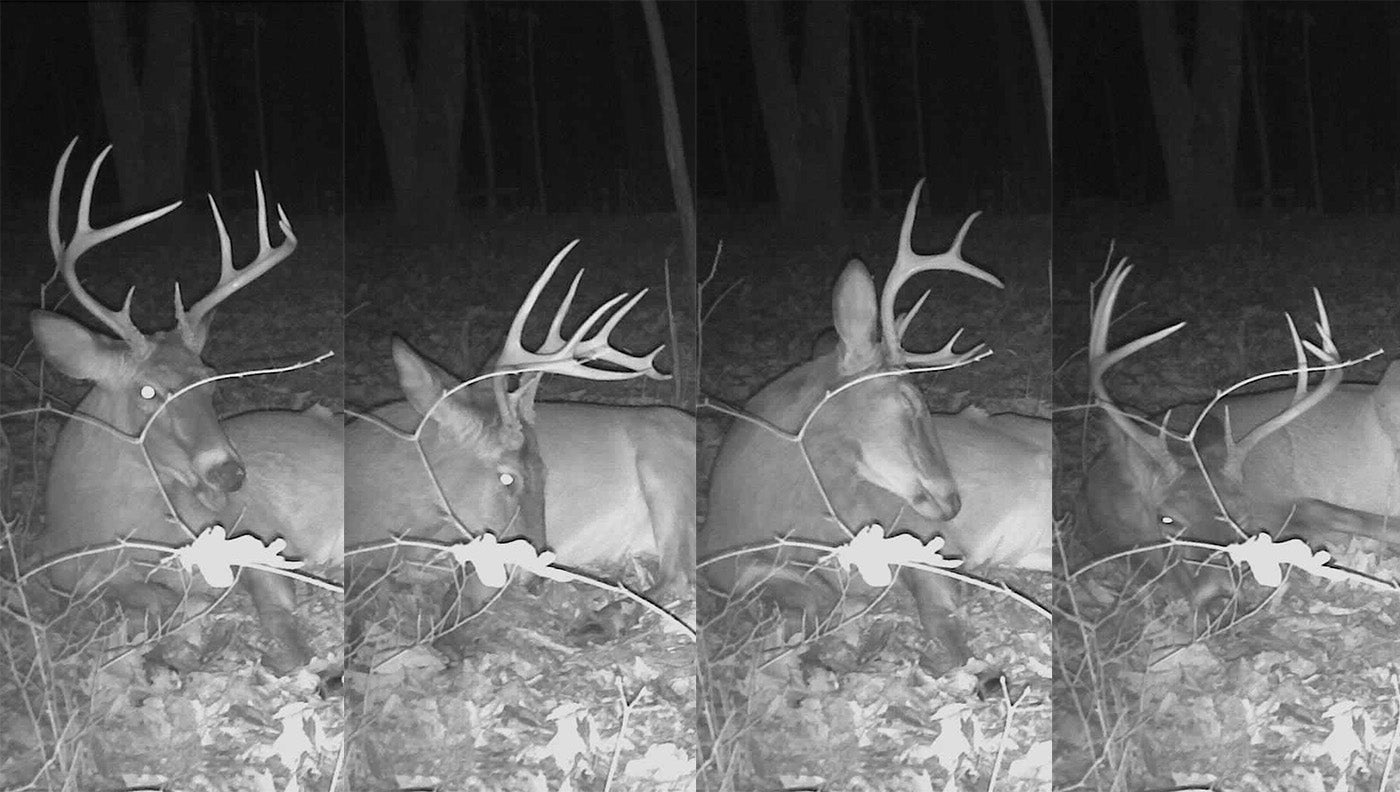 A whitetail bucks nods and snoozes, head up and down, eyes open and closed. Josh Honeycutt
SHARE

The wind was blowing so hard I had to pick my hat up off the ground, twice. The warm, early-season sun beat down on me as I picked my way along a tree line to a big oak I’d eyeballed a week or so prior. With the wind to cover my approach, I carefully hung a lightweight hang-on tree stand. As soon as I was settled in, I looked up and spotted my target buck bedded 40 yards upwind of me. I was shocked he hadn’t seen or heard me hang the stand.

I never did get close enough to arrow that buck, but I did get to watch him for several hours, and I received a first-class education of how wild deer behave while bedded. I’ve had a few similar encounters since, and I’ve gotten pictures of sleeping bucks on my trail cameras too. Each instance has been a rare window into a part of whitetail buck behavior many hunters never see.

The Basics of Deer Bedding Behavior

The vast majority of the deer we see are on their feet, feeding, traveling from one place to the next, chasing does, or scampering away. It’s no wonder then, that bedding behavior remains a bit of a mystery for hunters.

Most of us understand the basics. Whitetails are crepuscular animals, meaning they move most around dawn and dusk. They do most of their bedding during the brightest daylight hours and periodically throughout the night. Overall, deer can spend up to 75 percent of their time bedded. It’s a survival mechanism, as deer are more at risk of predation when up and about. They feed as much as they can in as short of a time as possible, and then bed down to chew their cud and watch for danger.

Because serious whitetail hunters tend to be fanatical about scouting, we have a pretty good handle on where deer bed, too. We know that nighttime bedding areas are typically close to or within feeding areas, and that daytime beds are usually tucked away in thick security cover or rugged terrain. In hot weather, deer will favor shadier north-facing slopes or lay down beside a cooling water source. They’ll soak up the sun on south-facing slopes when temperatures plummet or seek shelter from precipitation and frigid winds in dense conifers.

Temperature aside, a mature buck will drink 3 to 5 quarts of water per day, and some of that is during daylight hours. Because of this, they tend to bed close to a water source year-round, even if it’s a small, stagnant one.

Between our basic knowledge, scouting intel, and hunting experience, most of us keep a mental list of likely bedding areas, including cedar thickets, CRP and other grasses, cutovers, ditches, leeward benches, marshes, oxbows, ridge points, and swamps. Precisely where bucks lie down is often more elusive, but the biggest mystery is exactly what do deer do during all those hours spent on their bellies.

Read Next: How to Sneak Up on a Bedded Buck

A Look Into the Life of a Bedded Buck

Unless in a bachelor group or tending a doe, bucks typically bed down alone. In contrast, does almost always bed in family groups, and each one beds down facing in different directions to watch for danger. Lone bucks tend to bed facing downwind. This allows them to watch downwind with their eyes and detect danger from upwind with their nose. They also use thermal drafts. If the wind shifts, deer will often get up and reposition. Sometimes, this is a short distance away. Other times, it’s to a completely different area.

In areas with good habitat, deer don’t need to bed up against physical structures. This is much more common in areas with poorer habitat, where deer tend to bed against boulders, logs, and other large objects that break up their outline. Regarding posture, they can rest with their head on the ground, on their side, or in an upright position. During colder weather, deer may tuck their nose under their hind legs.

Once bedded, deer often spend the first few minutes or even hours keeping an eye on their backtrail to spot any predators that might track them back to their daytime lairs. As they settle it, the main priorities become resting, digesting, and some honest-to-goodness shut-eye.

“It seems that deer bed or lay down way more than they actually sleep—head down,” says Dr. Grant Woods, wildlife biologist and host of Growing Deer TV. “Deer are ruminants and spend hours digesting food. They certainly can reach a state of deep sleep, as a few hunters walk up on deer that appear to be in a deep sleep. It seems most deer beds I find in the snow or leaves don’t show sign of a deer laying its head down.” Deer alternate between dozing, chewing cud, grooming themselves, and simply being still. It’s especially common for deer to groom before and just after standing up from their bed.

“A typical sleeping bout for a deer includes 30 seconds to a few minutes of dozing, followed by a brief alert period, and then more dozing followed by an alert period,” says Kip Adams, chief conservation officer with the National Deer Association. “This cycle often lasts about 30 minutes. Generally, once per 30 minutes, deer will stand and stretch, and they may urinate or defecate before lying back down.”

Whether deer are dozing with eyes open or closed, they are continually monitoring what is going on around them, according to Adams. “Their ears are never lowered, and they can wake up instantly. That is why it is so rare to sneak up on a sleeping deer. In fact, it’s unlikely you will ever do so, but it is possible to view a sleeping deer from a distance. This is especially true if you hunt deer in heavy cover. Deer sleep every day, and during daylight hours they typically do so in secure cover, so your best chance to view one is from a stand when a deer moves into view and beds down. Since they can sleep with their eyes open, you may even have witnessed it in the past without realizing it.”

There’s plenty about whitetail bedding behavior that you can use to improve your hunting success. And you should. But what has struck me most during the rare glimpses I’ve had of bedded bucks is simply this: Whitetail deer are fascinating, even when they’re asleep.

Read Next: Find These 6 Types of Deer Beds to Zero In On Big Bucks

Do deer sleep with their eyes open?

Deer can sleep with their eyes open or closed. They are incredibly light sleepers and remain very alert after they doze off.

How many hours does a deer sleep?

Deer will typically sleep in 30-minute periods. During that time, they will sleep in a cycle, dosing off for around 30 seconds to a minute, followed by a period of alertness.

Do deer sleep with their heads up?

Because deer remain alert while they sleep, their head position can change constantly. They can sleep with their heads up or down and in cold weather they’ll sometimes tuck their nose under their hind leg.