Matt Reed of Hardin County, Kentucky, arrowed the deer of a lifetime on September 3. Here's the story of his hunt 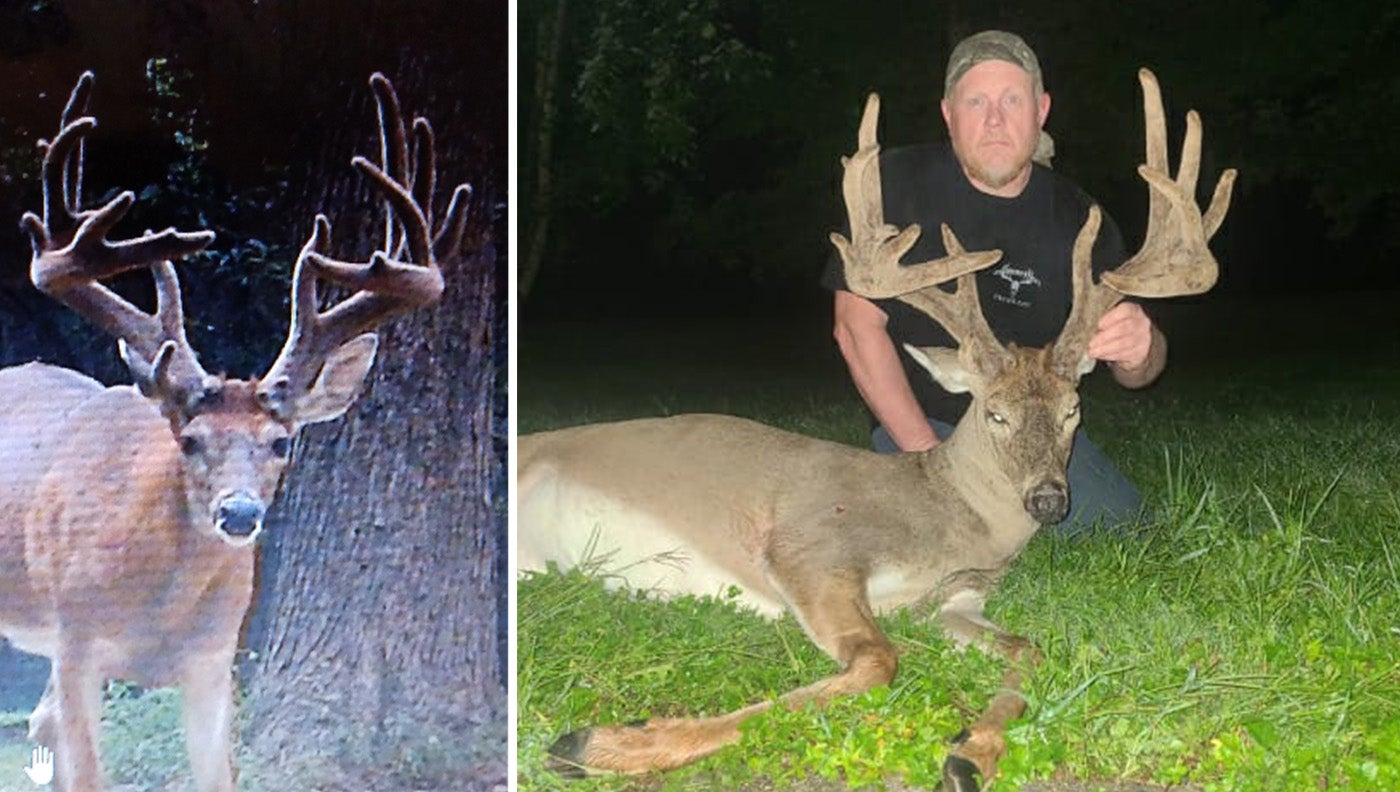 Matt Reed, 45, has been hunting whitetails in Hardin County, Kentucky, his whole life, but he’s never killed a buck anywhere near as big as the giant he tagged on September 3, 2022. At about 6 p.m. on the evening of opening day, Reed put an arrow through a deer he’d been eying since June, and when he finally found it around midnight, it exceeded all of his expectations. With an unofficial Boone and Crockett score that Reed says is 194 1/8″, the early-September trophy sports 18 points with super-wide bases and an 18 1/4-inch inside spread.

“I don’t hunt this early in the season every year,” Reed told F&S. “But if I’m hunting a good-size deer, early season is the best time in my mind to hunt them, because you can time your watch to when they’re going be where they’re going to be.” Reed says he climbed into his stand around 1 p.m. that day. Though he’d scouted the buck methodically all summer long and had high expectations of a run-in, the weather made him uneasy.

“I totally de-scented the best I could, but it got up to almost 90 degrees,” Reed said. “Scent control is fickle at best in those kinds of temperatures.” With the conditions weighing on his mind, Reed watched several does and fawns meander in and out of thick cover early on during his afternoon hunt. Hours later, a nice 10-point buck showed up and gave him a perfect shot. “He was probably 135 to 140 inches, still in velvet,” Reed said. “He came out at 15 yards or so and turned broadside. But I was like, No, forget it. This isn’t what I came for.”

As it turned out, the buck he did come for wasn’t far behind. “Out of the corner of my eye, I saw a deer moving, and out comes this big thing,” Reed said. “He walked out directly underneath me. Then he kind of postured toward that 10-point, and when he did, he turned broadside.” Reed sent an arrow zipping into the big buck’s vitals. He said the deer exploded into a nearby thicket and left him shaking like a leaf in its wake.

Once he collected himself enough to safely climb down from his tree stand, Mother Nature threw Reed another curveball. “I get halfway down, and it absolutely starts pouring,” he said. “I knew I’d hit him clean, but here it is coming a flood, and I’ve got to find this deer.” With each raindrop, Reed knew that his blood trail would get harder and harder to follow, and the thought of losing the once-in-a-lifetime buck became an increasingly realistic prospect.

“I walked down and found my arrow, and it was covered in bright-red lung blood,” he said. “But I found no deer, no blood trail, and I started to get a sinking feeling in the pit of my stomach.” Luckily, Reed knew of a neighbor with a tracking-dog service. He had to wait several hours for the dog and its owner to arrive, but once on the scene, the lab sniffed the big whitetail out in short order. “He only went about 60 or 70 yards from where I shot him,” Reed said. “He was just in such thick cover that if you weren’t within 10 or 15 yards of him, you were never gonna see him.”

Reed said that the tracking dog made all the difference that night. “If you can’t find a deer, get out and get somebody with a dog,” he said. “Would we have found him the next day? Probably. But the meat would have been ruined. It just would have been horrible.”

Instead, Reed located his trophy, celebrated with his son, and will soon have the monster mounted and hanging on a wall in his house. “Killing a deer like that has always been my end goal,” he said. “I’m still walking around with a stupid grin on my face.”