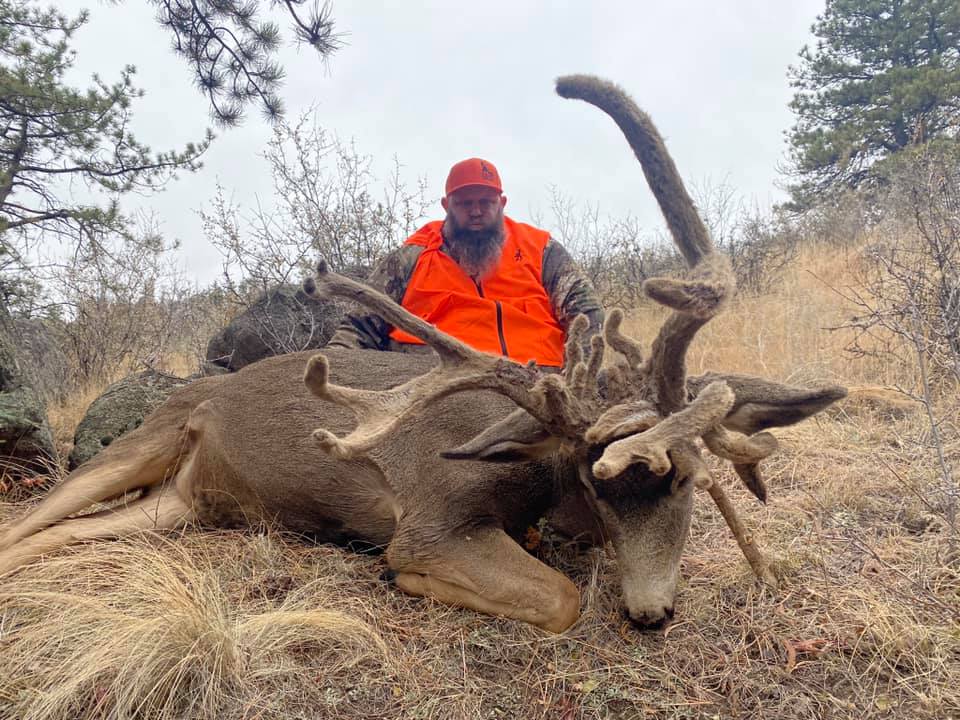 Ever since he saw a photograph of a gnarly non-typical mule deer in Field & Stream when he was a kid, 49-year-old Bobby Mathews had dreamed of shooting one himself. This Halloween, he made the dream come true by tagging a 26-point cactus buck that takes gnarly to the next level.

Mathews, from Idaho City, Idaho, was hunting private land in Colorado’s Unit 58, which is west of Colorado Springs in Park and Fremont Counties. The night before the hunt, he and his buddy J.D. Johns were reviewing trail camera photos that Johns recorded in 2020. One photo showed a nice 4-by-4, but in the background, Mathews noticed the rump of what appeared to be a very big-bodied deer. “I asked, ‘what about that one?’” Mathews recalls. “He said, ‘you wouldn’t believe it, but that’s a cactus buck.’” Johns searched his photos until he found a shot that showed the buck’s fork-horn rack, which was covered with the telltale permanent velvet of a cactus buck. It wasn’t particularly large by mule deer standards, but Mathews was intrigued anyway. “I said, ‘Boy, I’d poke a hole in that thing,’” he recalls. “I like crazy unique animals.”

On October 31, Mathews and Johns headed back to an area where they had spooked a nice 5-by-5 mule deer the day before that they hoped to spot again. It was unseasonably warm, and they weren’t seeing many deer. “It started to get a little disheartening, like maybe this isn’t going to come together,” Mathews recalls. “And then all of a sudden, boom: there’s a deer.”

Actually, there were three bucks out in the open about 800 yards away. As they glassed the muleys, Johns told Mathews he thought one of them might be the cactus buck they were talking about the night before.

Until this summer, when he learned about the special cactus buck deer tag offered in Utah, Mathews says he’d never heard of the “cactus” phenomenon, which causes bucks to develop misshapen, velvet-covered antlers due to variations in testosterone levels that can be caused by injury or lack of development of a buck’s testicles. The technical term for the condition is “cryptorchidism.”

Mathews’s cactus buck had clearly undergone a growth spurt: His rack was three times larger than the year before, according to Johns. “I knew right away when I saw him through the binoculars that it was the deer I was going to take if I could get it,” Mathews says. He and Johns went on a 600-yard stalk to get within 200 yards of the deer. “I got up there and took one look at him, then I just put the scope on his shoulder and pulled the trigger.”

Mathews has sustained back and foot injuries in the past that slow him down, so hunting hilly country at 10,000 feet was especially challenging. “That’s a lot for a fit person, let alone someone who’s 5-feet-11, 350 pounds,” he says. “I’m slow. I savor every breath, and there’s a lot of ‘em because I’m out of breath a lot. But I put one foot in front of the other, and I got there.”

It wasn’t until he recovered the buck did Mathews realize how unique it truly was: “I knew there was a lot going on with his rack, but I had no idea it had the mass of horns behind its mainframe, and all the stuff coming off the bases,” he says. “Every time I looked, I’d find another point.”

“He was a true mountain monarch, and I sat with him for an hour after the shot, just admiring him and showing gratitude,” Mathews says. “When J.D. showed me that picture the night before, we had no idea I’d actually kill that deer the next day. It’s just so ironic to live 49 years on this earth, never hear of something called a cactus buck, learn about it, hear about it again the night before a hunt, and then harvest one the next day. I mean, how crazy is that? It’s the weirdest thing, and I’ll forever be grateful.”