After not seeing this trophy buck in nearly two years, Mitchell Blake finally crossed paths with it again this fall—for the final time 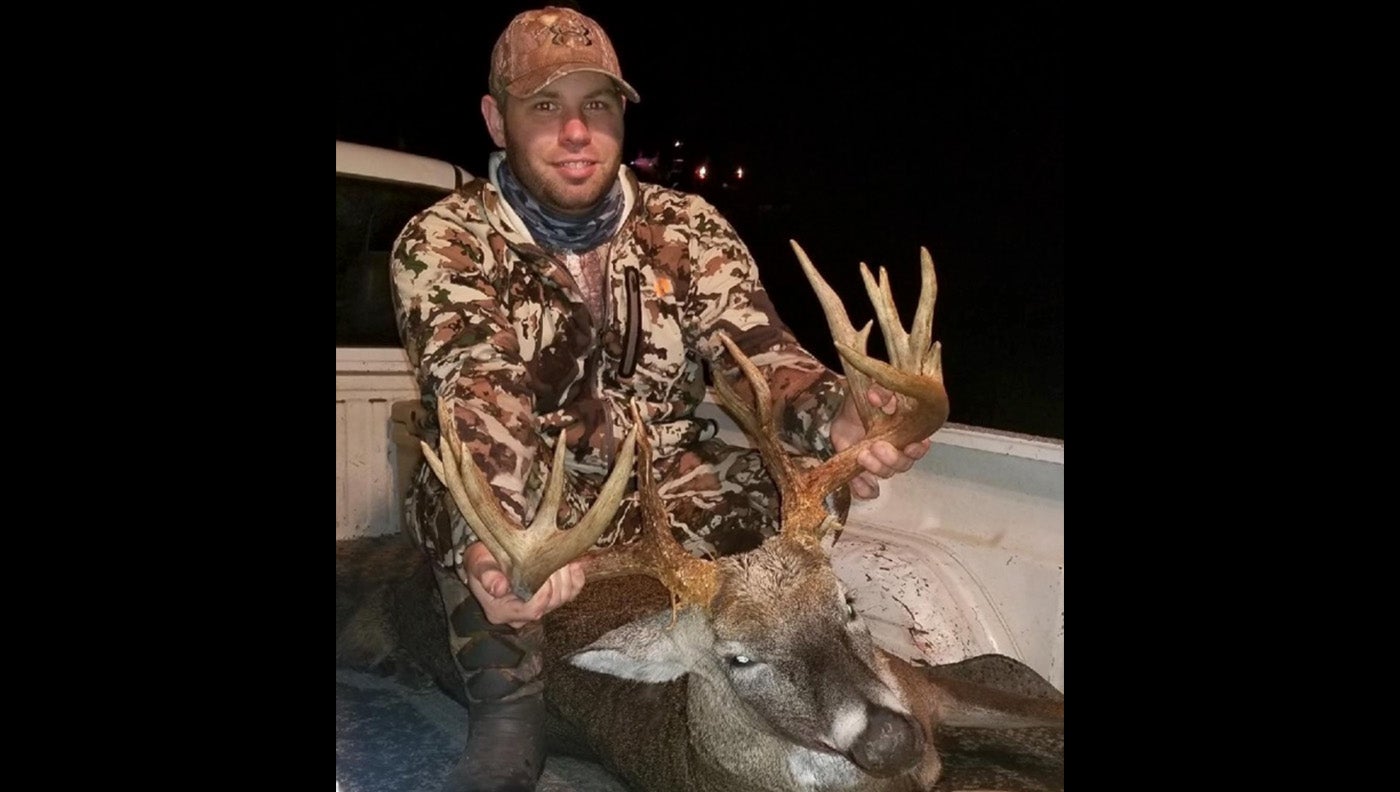 Ohio hunter Mitchell Blake had one trail-cam photo of an incredible buck on his family’s property two years ago—but the deer disappeared. Then, on October 24 of this year, Blake crossed paths with the giant for a second time. A cold front was moving through, and heavy rain was forecasted for the next day. Blake guessed that deer would be on their feet—and he was right.

The wind direction was good at one of Blake’s favorite spots—an area with open woods and thick brush. The spot was full of oak trees and served as a transition area between bedding cover and some ag fields about 1,000 yards away. Blake hoped to intercept a different mature 8-pointer he’d seen in trail-cam photos as the buck moved through the open timber from his bed to the grub.

Blake was in deer all afternoon. Two does, four yearling bucks, and a 120-inch buck milled around the timber. Then, around 5:50 p.m., he spotted a giant deer along with another big buck. “He had such a dark rack, I couldn’t tell how big he was,” says Blake. “But I could tell from the sway in his back that he was mature.”

Blake decided that he’d shoot it if he got the chance. “He popped out of nowhere in front of me, looking for a doe, but he stopped behind a tree,” says Blake. “It felt like an hour before he walked into the opening.” The buck then paused at 35 yards away, offering a clear shot. Blake settled his crossbow and pulled the trigger.

After giving the deer a few minutes, the hunter starting searching for blood. When he found the crossbow bolt, he could see that it had passed through, but that there wasn’t much blood. Blake couldn’t find blood on the ground either. He backed out and returned with his brother-in-law, some cousins, and friends.

The group searched for about an hour with little to show for it. Then, they picked up a heavy blood trail that led them right to the dead buck, which had 19 points and unofficially grossed 181 inches. Blake’s taxidermist aged the deer at 5½ years old.

“We were shocked,” he says, noting the buck came off of a property that’s been in the family since 1966. “I assumed this deer was a 140- to 150-class buck, which I’d be more than happy with, but we were blown away by how big it really was. The fact that I got to share the experience of tracking and recovering the buck with my closest family and friends means a lot.”